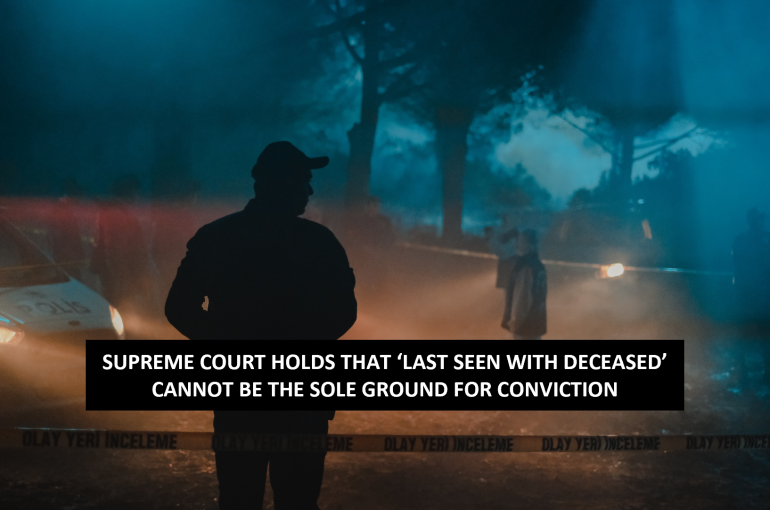 Recently, a two Judge Bench of the Supreme Court comprising of Justice S. Ravindra Bhat and Justice Pamidighantam Sri Narasimha passed a Judgment dated 17-01-2023 in the matter of Jabir and Others vs The State of Uttarakhand Criminal Appeal No 972 of 2013 and held that the accused persons cannot be convicted on the sole basis of their ‘last seen with the deceased’ basis, when there are no other circumstantial evidences proved against the accused.

(i) In this case, a 7-year-old minor boy named Hasan (Deceased) who was a resident of Akbarpur Village, Uttarakhand, went missing on 08-10-1999. Later, on 10-10-1999, his dead body was recovered from a sugarcane field belonging to one, Yaqub in Narayanpur Village.

(ii) Thereafter, Inquest Proceedings were initiated by ASI Dalchand (Prosecution Witness i.e. PW-9) to determine the cause of death occurring under suspicious circumstances under Section 174 of the Code of Criminal Procedure 1973 (CrPC) (Police to enquire and report on suicide, etc).

(iii) The Post-Mortem was conducted on 11-10-1999 and Dr. A.K. Jain (PW-9) stated that (i) the minor boy’s death occurred about two days before the Post-Mortem Examination and (ii) the cause of death was shock and haemorrhage as a result of ante mortem injuries.

(v) Based on the said information, PW-1 immediately went to the nearest Police Station at Manglore to lodge the report on 12-10-1999, but the same was not recorded by the Police. The PW-1 was a poor man and he was also getting threats of dire consequences.

(vi) Hence, PW-1 filed an Application under Section 156 (3) CrPC (Police officer’s power to investigate cognizable case) on 19-11-1999 before Ld. Magistrate, at Roorkee, District Haridwar, upon whose directions, a First Information Report (FIR) dated 21-11-1999 was registered. Upon investigation of the incident, the Police arrested the Accused 1 to 3.

1) Aggrieved by the Trial Court Order, the Accused 1-3 filed Criminal Appeal No. 358 of 2004 before the High Court of Uttarakhand, at Nainital.

3) Further, despite absence of proof of any motive, the chain of circumstances lead to the conclusion that the Accused 1 to 3 kidnapped the Deceased for murder. Hence, as the Prosecution proved its case beyond reasonable doubt, the High Court upheld the conviction and sentence awarded by the Trial Court Order, vide Judgment dated 05-10-2012.

(1) That there were glaring discrepancies in the Prosecution Witnesses’ testimonies and that the Trial Court and the High Court convicted the Accused 1 to 3 simply on the basis of their ‘last seen with the Deceased’ theory:

i) That the PW 2 and 3 deposed and claimed to have seen the Accused 3, Husn Jahan holding the hand of the Deceased and taking him inside her house on 08-10-1999. The said information was given to the Deceased’s father, PW-1 by PW 2 on 10-10-1999 and by PW 3 on 12-10-1999, as PW 3 had gone to visit his son in Bijnor in the intervening period. But as per PW-7, Mansab, who was present during the inquest proceedings, claimed that PW 2 and 3 were present during such inquest conducted in the said intervening period. Hence, PW-2 and 3’s testimony was held weak for the Prosecution’s case.

(iv) It was rather startling that although PW-5 knew about the enmity between PW-1 and PW-5 family, PW-5 did not intercede upon seeing his sons, Accused 1 and 2 with the Deceased on 09-10-1999, which was highly unnatural.

(vi) Further, most of the Prosecution Witnesses who had claimed to have seen the Accused with the Deceased, were all related to the Deceased’ father, PW-1.

(2) That in circumstantial evidence cases, all the circumstances and evidences taken cumulatively, should form such a link / chain so as to prove the guilt of the accused beyond reasonable doubt. The chain of evidence must be so complete that there is no reasonable ground left to believe that the accused may be innocent. The facts so established should be consistent only with the hypothesis of the guilt of the Accused. In this regard, the Bench observed as follows:

A basic principle of criminal jurisprudence is that in circumstantial evidence cases, the prosecution is obliged to prove each circumstance, beyond reasonable doubt, as well the as the links between all circumstances; such circumstances, taken cumulatively, should form a chain so complete that there is no escape from the conclusion that within all human probability, the crime was committed by the accused and none else; further, the facts so proved should unerringly point towards the guilt of the accused. The circumstantial evidence, in order to sustain conviction, must be complete and incapable of explanation of any other hypothesis than that of the guilt of the accused, and such evidence should not only be consistent with the guilt of the accused but should be inconsistent with his innocence.

Thus, based on the aforesaid observations and the glaring deficiencies in the Prosecution Witnesses’ testimonies, the Supreme Court held that the Prosecution had not proved the case beyond reasonable doubt. The Prosecution in fact based their case solely on the ‘last seen’ theory i.e. the Accused were last seen with the Deceased, therefore, they were charged with various offences under IPC. Thus, as there was no evidence to connect the Accused 1 to 3 with the death of the Deceased, the Apex Court held that the conviction cannot be based on the only circumstance of ‘last seen together’. Hence, the Supreme Court set aside the Trial Court Order and the High Court Judgment dated 05-10-2012 and held that the conviction and sentence of the Accused 1 – 3 were unsustainable. As a result, the Appeal filed by the Accused 1- 3 was allowed and they were released.