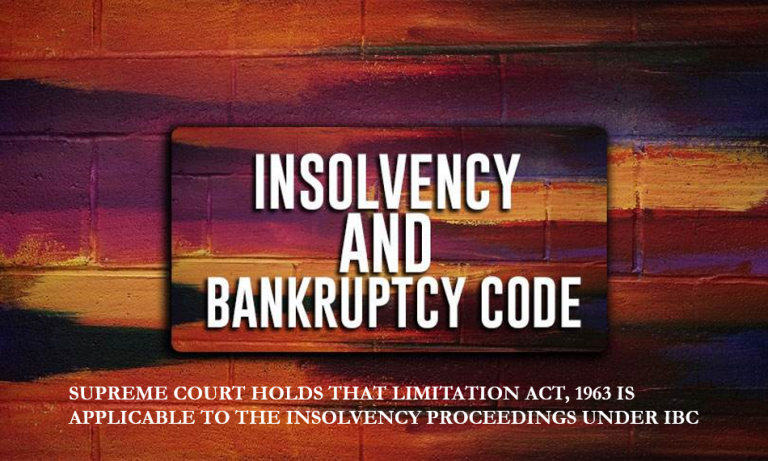 SUPREME COURT HOLDS THAT LIMITATION ACT, 1963 IS APPLICABLE TO THE INSOLVENCY PROCEEDINGS UNDER IBC

The #SupremeCourt of India in the case of Sesh Nath Singh & Anr. versus Baidyabati Sheoraphuli Co-Operative Bank Ltd and Anr. [Civil Appeal NO. 9198 OF 2019], vide its Judgment dated 22.03.2021 held that the #Limitation Act 1963 is applicable to proceedings under Insolvency and Bankruptcy Code, 2016 (‘#IBC’).

The Debi Fabtech Private Ltd. through Mr Sesh Nath Singh (‘Corporate Debtor’) took Cash Credit Facility of Rs.1, 00,00,000/- (Rupees One Crore) from the Baidyabati Sheoraphuli Co-Operative Bank Ltd (‘Financial Creditor’), which was sanctioned on 15.02.2012. In May, 2012, the Corporate Debtor defaulted in the payment of its debts. On 31.03.2013, the Financial Creditor declared the Corporate Debtor account as Non-Performing Assets (NPA). On 18.01.2014, a notice was issued to the Corporate Debtor under Section 13(2) of the Securitization and Reconstruction of Financial Assets and Enforcement of Security Interest Act, 2002 (‘SARFAESI Act’). Thereafter, several correspondences were exchanged between the Parties but to no avail.

On the other hand, in Writ Petition before the High Court an Interim Order dated 24.07.2017 was passed restraining the Financial Creditor from taking any steps against the Corporate Debtor under the SARFAESI Act.

As a result, the Financial Creditor filed an Application under Section 7 of the IBC for initiating the Corporate Insolvency Resolution Process (‘CIRP’) against the Corporate Debtor before the National Company Law Tribunal (‘NCLT’), Kolkata Bench. The NCLT, vide its Order dated 25.04.2019 admitted the said Application. Insolvency Resolution Professional (IRP) was appointed and moratorium was declared under Section 14 of the IBC

In this regard, the Supreme Court observed that the Limitation Act, 1963 has been enacted to consolidate and amend the law of limitation related to suits and other proceedings connected therewith. Thereafter, the Supreme Court referred to the Section 238A of the IBC, which reads that the provisions of the Limitation Act, 1963 shall as far as may be apply to proceedings or appeals before the Tribunals established under the IBC.

Therefore, there can be no dispute with the period of limitation for making an application under Section 7 or 9 of the IBC is 3 years from the date of default. It further referred to the Section 5 of the Limitation Act 1963, which provides that any appeal or any application, except an application under Order XXI of the Code of Civil Procedure, 1908, may be admitted after the prescribed period of limitation. However, there has to be a sufficient cause for not filing the appeal or application within the required period.

The Supreme Court also referred to the Sections 14 and 18 of the Limitation Act, which provides that an acknowledgement of present subsisting liability, has the effect of commencing of a fresh period of limitation, from the date on which the acknowledgment is signed. However, the acknowledgment must be made before the period of limitation expires. On the other hand, Section 14 excludes the time spent in proceeding in a wrong forum, which is unable to entertain the proceedings for want of jurisdiction, or other such cause. The Supreme Court said that where such proceedings have ended, the outer limit to claim exclusion under Section 14 would be the date on which the proceedings ended.

In view of the above, the Supreme Court held that since the proceedings in the High Court were still pending on the date of filing of the application under Section 7 of the IBC in the NCLT, the entire period after the initiation of proceedings under the SARFAESI Act could be excluded. Therefore, the Application before the NCLT is well within the limitation of 3 years.