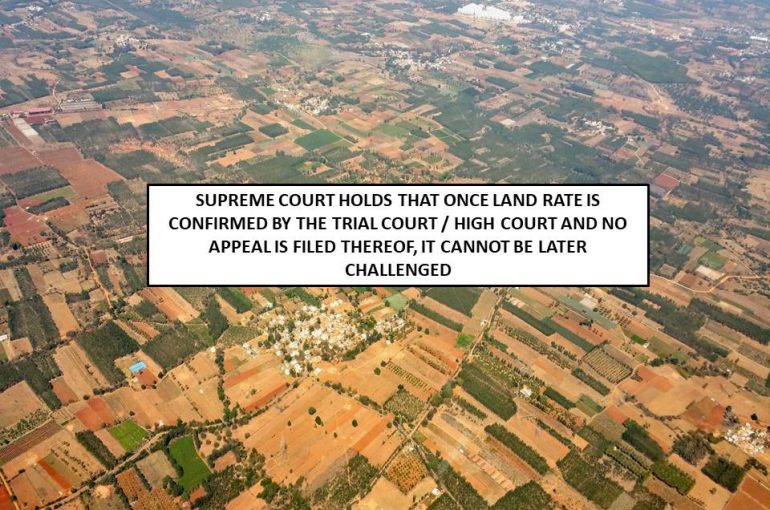 SUPREME COURT HOLDS THAT ONCE LAND RATE IS CONFIRMED BY THE TRIAL COURT / HIGH COURT AND NO APPEAL IS FILED THEREOF, IT CANNOT BE CHALLENGED LATER

A two Judge Bench of the Supreme Court comprising of Justice M.R. Shah and Justice C.T. Ravikumar, passed a Judgment dated 17.10.2022 in the case titled as Radhey Sham v. The State of Haryana and Others. in Civil Appeal No. 7391 Of 2022 and held that once the Judgment of Trial Court / High Court is accepted and no appeal is made thereof, then later it cannot be reversed or denied.

In this case, the State of Haryana (“State”) acquired the land situated at village Hansi and Dhana, District Hisar, Haryana for the development of residential and commercial buildings under Land Acquisition Act, 1894 (“Act”). On 29.08.2005, a Public Notice was issued by the State under Section 4 (Publication of preliminary notification and powers of officers there upon) of the Act. Thereafter, on 29.08.2006, for public purposes the Declaration was issued as per provision of Section 6 (Declaration that land is required for a public purpose) of the Act.

Accordingly, the Land Acquisition Collector (“Collector”) vide Order dated 03.08.2007 passed an Award as per Section 11 (Enquiry and award by Collector) of the Act.  The Collector fixed the market value of land ranging from Rs. 166/- per square yard to Rs. 200/- per square yard.

Dissatisfied by the amount fixed by Collector, one, Radhey Sham (“Landowner”) approached the Reference Court. The Reference Court vide Order dated 31.05.2014 assessed and enhanced market value of property to Rs.1,000/- per square yard. The Judgment was accepted by the State, however, Landowner preferred First Appeal at High Court of Chandigarh (“High Court”).

Consequently, the High Court further remitted the matter to the Reference Court for re-examining the Sale Deeds which was produced by the Landowner vide Order dated 28.08.2019. After taking into consideration the Sale Deeds, the Reference Court passed an Order dated 29.01.2020 and held that the market value of the land should be Rs. 750/- per square yard subject to confirmation by the High Court.

The Learned Senior Advocates on behalf of the Landowner contended that the Order dated 31.05.2014 passed by Reference Court determining the market value at Rs. 1,000/- per square yard was accepted by the State earlier. Thus, market rate at Rs. 1,000/- per square yard as compensation should be applicable. On behalf of the State, Learned Additional Advocate General submitted that it was the Supreme Court which remanded the matter to High Court and following the same, the High Court referred the matter for fresh consideration. Consequently, the Reference Court assessed the amount of compensation at Rs. 750/- per square yard vide Order dated 29.01.2020. Thus, merely on the ground that Appeal was not preferred at that stage by the State does not make Landowner entitled to compensation at Rs 750/- per square yard.

That whether the State has preferred Appeal against Order dated 31.05.2014 is not a point of concern but the fact that it is the landowner who preferred an Appeal in High Court for enhancement of compensation amount is important.  Also, landowners shall be entitled to the compensation considering the market value of the acquired land at least at Rs. 1,000/- per square yard as per the earlier Order dated 31.05.2014 passed by the Reference Court as it has attained the finality.  As a result, the Supreme Court allowed the Appeal and set aside the High Court Order dated 04.03.2022.