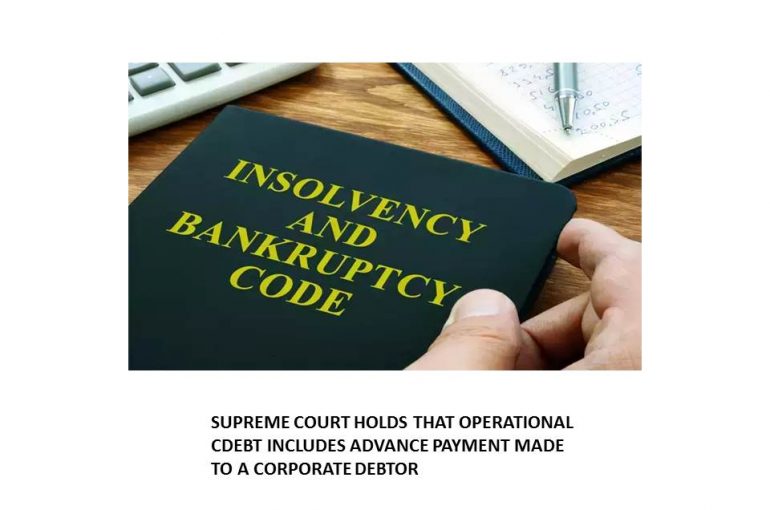 A Three Judge Bench of the Hon’ble Supreme Court of India comprising of Justices Dr Dhananjaya Y Chandrachud, Surya Kant and Vikram Nath passed a Judgment dated 04-02-2022 in the case of M/s Consolidated Construction Consortium Limited Vs M/s Hitro Energy Solutions Private Limited {Civil Appeal No 2839 of 2020} and held that Operational Debt includes advance payment made to a Corporate Debtor for the supply of Goods or Services.

In the present case, a Project was being executed by M/s Consolidated Construction Consortium Limited (Appellant) in which Chennai Metro Rail Ltd. (CMRL) had placed an order with the Appellant for the supply of light fittings. In pursuance to this, the Appellant vide three purchase orders dated 24-06-2013, placed orders with the Proprietary Concern, which was the supplier of Thorn Lighting India Private Limited (TLIPL). It was noted in these purchase orders that the delivery of the light fittings would strictly be in accordance with the schedule provided by the Appellant.

The Proprietary Concern requested the Appellant for an advance payment of Rs 50,00,000. The Appellant issued a cheque of Rs 50,00,000 in favor of Hitro Energy Solutions Private Limited (Respondent), with the condition that the delivery of the light fittings should be in compliance with the schedule provided by the Appellant.

On 02-01-2014 the Appellant was informed that the Project has been terminated. According to the Appellant, this information was communicated to the Proprietary Concern on the same day. However, the Respondent denied the same.

Vide Judgment dated 06-12-2018, the National Company Law Tribunal (NCLT) admitted the Application declared a moratorium under Section 14 of the IBC and appointed an IRP. However, the Order of the NCLT was set aside on 12-12-2019 by the National Company Law Appellate Tribunal (NCLAT) by way of an Appeal that was filed in the NCLAT. In Appeal, the NCLAT set aside the NCLT’s decision, dismissed the Application of the Appellant under Section 9 of the IBC and released the Respondent from the ongoing CIRP.

The NCLAT held that:

“(i) the Appellant was a ‘purchaser’, and thus did not come under the definition of ‘Operational Creditor’ under the IBC since it did not supply any goods or services to the Proprietary Concern/Respondent;

(ii) there is nothing on record to suggest that the Respondent has taken over the Proprietary Concern; and

(iii) in any case, the Appellant cannot move an Application under Sections 7 or 9 of the IBC since all purchase orders were issued on 24 June 2013 and advance cheques were issued subsequently.”

Aggrieved and dissatisfied, an Appeal was filed under Section 62 of the IBC. While issuing notice by its Order dated 18-11-2020, the Apex Court stayed the Judgment and Order dated 12-12-2019 passed by the NCLAT and framed the following issues:

“(i) Whether the Appellant is an operational creditor under the IBC even though it was a ‘purchaser’;

(ii) Whether the Respondent took over the debt from the Proprietary Concern; and

While taking into consideration, the facts of the case and arguments advanced by the Parties to the dispute, the Bench opined that “the phrase “in respect of” in Section 5(21) has to be interpreted in a broad and purposive manner in order to include all those who provide or receive operational services from the corporate debtor, which ultimately lead to an operational debt. In the present case, the Appellant clearly sought an operational service from the Proprietary Concern when it contracted with them for the supply of light fittings. Further, when the contract was terminated but the Proprietary Concern nonetheless encashed the cheque for advance payment, it gave rise to an operational debt in favor of the Appellant, which now remains unpaid. Hence, the Appellant is an Operational Creditor under Section 5(20) of the IBC.”

Thus, while allowing the Appeals and setting aside the Judgment of the NCLAT the Court held that the dispute in this case relates to repayment of the advance amount paid to them, and is not in relation to the quality of the services provided by the Proprietary Concern.