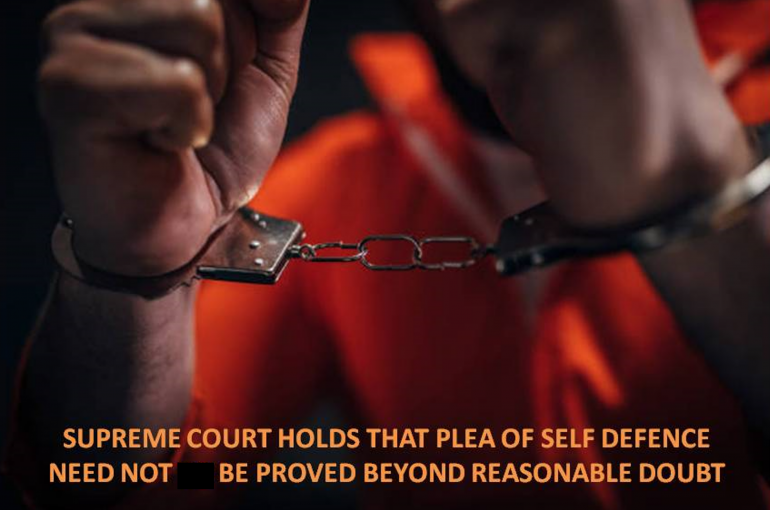 In a recent Civil Appeal, a two Judge Bench of the Supreme Court comprising of Justice B.R. Gavai and Justice Hima Kohli passed an Order and Judgement dated 14.06.2022 in ‘Ex. Ct. Mahadev Versus The Director General, Border Security Force & Ors.’ Civil Appeal No. 2606 of 2012 and partly modified the Order dated 03.03.2011 (Impugned Order) passed by the Division Bench of High Court of Delhi and held that the accused taking plea of self defense need not prove it beyond reasonable doubt.

In the present case, the Appellant-original Accused who was serving in Border Security Force (BSF) was tried by the General Security Force Court (GSFC) for committing an offence under Section 46 of the Border Security Force (BSF) Act, that is to say murder of a civilian, Nandan Deb (Deceased) punishable under Section 302 (Punishment for murder) of the Indian Penal Code, 1860 (IPC). The Appellant- original Accused pleaded not guilty of the charges framed against him. The Prosecution during the trial, examined 17 witnesses. But unfortunately, the Original Accused failed to produce any witness in his favour, instead he only made oral statement in his defense. The original Accused took the plea of self defense, but the same was rejected by GSFC vide Order dated 10.03.2007 and sentenced him with life imprisonment.

Being dissatisfied by the Impugned Order 03.03.2011 of the High Court, the Appellant approached the Hon’ble Apex Court by filing the present Appeal. The Counsel for the Appellant argued that, the High Court has erred in concurring the findings of GSFC and discarded the defense taken by the Appellant that he was compelled to exercise his right of private defense to save his life when suddenly confronted with intruders who were armed with weapons. The learned Counsel for the Appellant also referred to testimony of one, Sapan Das (PW-2) and other prosecution witnesses to submit that villagers in the area being close to the border of Bangladesh, used to regularly indulge in smuggling activities and even the Deceased used to do the same. The Counsel pointed out that this fact had not only been deposed by one, Vijay Kumar (PW-1), (the eye-witness who was patrolling in the area along with the Appellant) but also by Sub Inspector (M) Suresh Kumar Dagar (PW-17).

While the Counsel for the Respondent- Union of India, submitted that the High Court cannot be faulted for disbelieving the testimony of PW-1. The Counsel further contended that the findings of the GSFC are sound and reliance has rightly been placed on the testimonies of the local villagers, PW-2 etc. who had stated that the Appellant had summoned the Deceased and then shot at him twice without any provocation.

The Supreme Court after hearing the submissions of the respective parties, observed that a couple of months after the fencing had been fixed along the International Border with Bangladesh, there was an incident where smugglers had assaulted one of the members of the Battalion when he tried to prevent them from crossing the border. The Deceased also used to indulge in the smuggling activities and his name was mentioned in the list of smugglers maintained by the BSF, which is also a matter of record.

The Apex Court further added that testimony of PW-1, cannot be completely discarded, as done by the GSFC. He has deposed that when he and the Appellant were patrolling in the area on the relevant date, they had seen 3 persons crossing the International Border from Bangladesh side at 8.00 AM. On noticing the intruders, they had challenged them to stop at a distance of 50 meters. But the intruders ran away in the direction of Bangladesh. At this, PW-1 and the Appellant had turned back and while continuing with their patrolling duty, they saw 6-7 persons rushing towards them from the side of Bangladesh, carrying weapons. They managed to surround the Appellant. Apprehending a real threat to his life, the Appellant fired from his rifle at the intruders in self defense and the Deceased who was a part of the group, sustained bullet injuries and had fell on the ground.

The Supreme Court concluded by expressing that we are of the opinion that the right of private self defense would be available to the Appellant keeping in mind preponderance of probabilities that leans in favour of the Appellant. The Apex Court further added that the Appellant ought not to have been convicted for committing murder of the Deceased. Rather, the offence made out is of culpable homicide not amounting to murder under Exception 2 to Section 300 (Murder) IPC, thereby attracting the provisions of Section 304 IPC (Punishment for culpable homicide not amounting to murder).

The Appeal was partly allowed and the Impugned Order/Judgment dated 03.03.2011 was modified to the extent that the Appellant was held guilty for the offence of culpable homicide, not amounting to murder as contemplated under Exception 2 to Section 300 IPC.