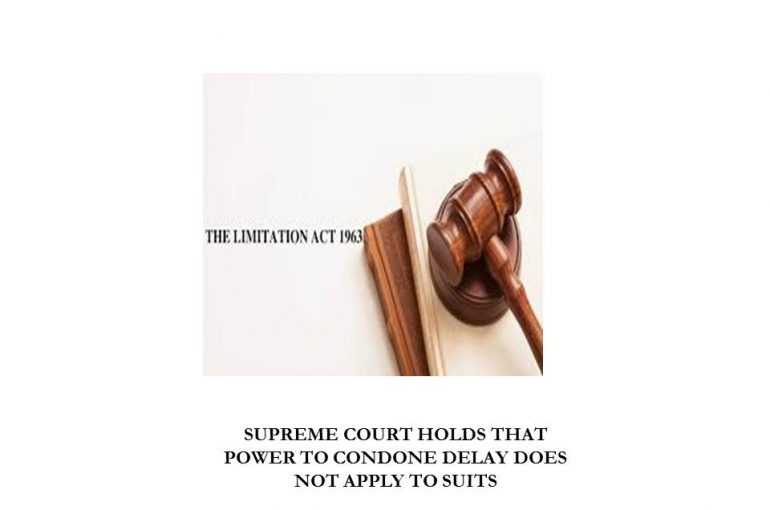 A Division Bench of the Hon’ble Supreme Court of India comprising of Justice Indira Banerjee and Justice J.K. Maheshwari passed a Judgment dated 02-03-2022 in the case of F. Liansanga & Anr. v. Union of India & Ors. Special Leave Petition (Civil) Nos. 32875-32876 of 2018 and held that power to condone the delay under Section 5 of the Limitation Act, 1963, (Act) does not apply to Suits.

According to the Petitioners, in the year 2002, the Chief Engineer of the Project Pushpak, Mizoram, made a request to the Petitioners to allow the Respondents to quarry stones from the land covered from the said passes, for the purpose of construction of the Hnahthial-Sangau-Saiha road. The said road was being constructed by the Union of India (Respondent No. 1), through its Ministry of Shipping and Surface Transport, New Delhi.

Consequently, the Petitioners made a verbal request to the Respondents for providing compensation for the stones removed from their land. On 20-04-2004, a letter was issued to the Petitioners by the Commanding Officer of the road construction stating that any Application for compensation had to be made to the Revenue Department, Government of Mizoram.

Thereafter, on 04-11-2009, the Petitioners served legal notice under Section 80 of the Civil Procedure Code, 1908 (CPC) calling upon the Respondents to compensate the Petitioners for the stones extracted. Subsequently, on 25-01-2011, the Petitioners filed a Civil Suit being Civil Suit No. 04/2010 in the Court of Senior Civil Judge-03, Aizawl District, Mizoram for compensation.

In response to this, the Respondents made an Application under Order VII Rule 11 of the CPC for rejection of the Plaint, on the ground of limitation. The said Application was allowed and the Civil Suit was rejected.

On 24-05-2011, the Petitioners filed Money Suit No. 60/2011 along with an Application being C.M. Application No. 104/2011 under Section 5 of the Act seeking condonation of delay of 325 days in filing the said suit. Vide Order dated 25-10-2011, the Senior Civil Judge allowed the said Application filed under Section 5 of the Act and made an observation that “the Respondents had extracted stones from the land of the Petitioners, and were making abortive attempts to avoid the payment of compensation to the poor and ignorant Petitioners.”

The Respondents also filed a Revisional Application being C.M. Application No. 104/2011 in the High Court of Gauhati (High Court). Vide Judgment and Order dated 14-05-2018, the High Court set aside the Order of the Senior Civil Judge. The main question for consideration before the High Court was whether the delay in filing the Money Suit for damages could be condoned by filing an Application for condonation of delay under Section 5 of the Act.

The High Court while placing reliance on the case of Popat Bahiru Govardhane & Others vs. Special Land Acquisition Officer & Anr. 2013) 10 SCC 765 reiterated the decision wherein the Apex Court had held that “it is settled law that limitation may harshly affect a particular party, but it has to be applied with all its rigour when the statute so prescribes. The Court has no power to extend the period of limitation on equitable grounds, even though the statutory provision may sometimes cause hardship or inconvenience to a particular party. The Court has no choice, but to enforce it giving full effect to the same.”

Therefore, the High Court set aside the Impugned Judgment dated 25-10-2011 passed by the Senior Civil Judge and vide Impugned Judgment and Order dated 14-05-2018 allowed the Civil Revisional Petition being CRP No.12 of 2011. It observed that “the Limitation Act was applicable in the State of Mizoram and that a perusal of Section 5 of the Limitation Act, 1963 clearly showed that Section 5 did not apply to suits, but only to appeals and to applications except for applications under Order XXI of the Civil Procedure Code.”

Assailing the Judgment and Order dated 14-05-2018, the Petitioners approached the Hon’ble Supreme Court of India by way of Special Leave Petition. The question that arose in the Special Leave Petition was, whether the Court can condone the delay in filing a money suit seeking compensation for stones extracted by the concerned Respondents, from the land of the Petitioners, for the construction of a public road.

While making a reference to the case of J. Thansiama vs. State of Mizoram & Others, being Civil Appeal No. 3536/2008 the Apex Court stated that Limitation Act applied in the State of Mizoram with effect from 21-01-1972.

The Supreme Court, thus, while dismissing the Special Leave Petition upheld the Judgment dated 14-05-2018 passed by the High Court.

The Limitation Act, 1963 lays down limitation for initiating any legal proceedings. The Schedule to the Act lays down periods of limitation for filing of a suit which is 3 years from when the Bill or demand was raised. Once time stars running it does not stop. Section 9 of the Act clearly states that where once time has begun to run, no subsequent disability or inability to institute a suit or make an application stops it. Hence, the Trial Court erred in allowing the Application that was filed by the Petitioners for extension of time under Section 5 of the Act, which allows extension if sufficient cause is shown.