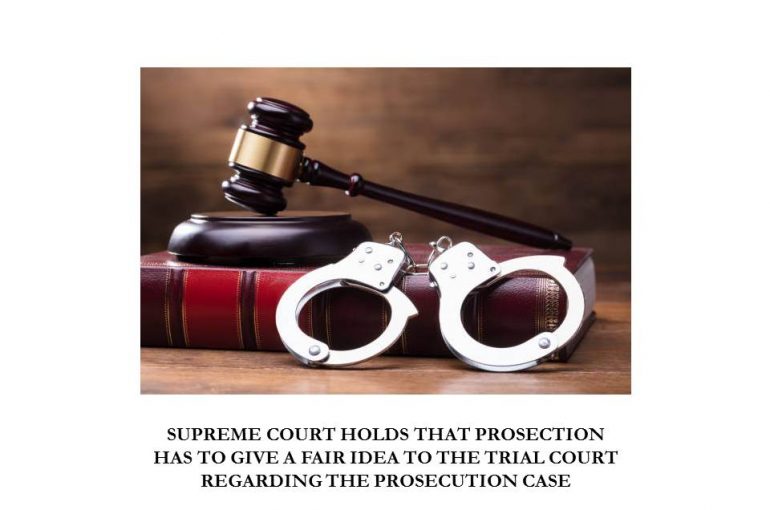 A two Judge Bench of the Hon’ble Supreme Court of India comprising of Justice A.M. Khanwilkar, Justice Abhay S. Oka and Justice J.B. Pardiwala passed a Judgment dated 26-07-2022 in the case of Gulam Hassan Beigh versus Mohammad Maqbool Magrey & Ors. (Arising out of S.L.P.(Criminal) Nos.4599 of 2021) and held that before the Court proceeds to frame the charge against the Accused, the Public Prosecutor owes a duty to give a fair idea to the Trial Court as regards the case of the prosecution.

Thereafter, the Appellant went to the Police Station at Dangiwacha and  an F.I.R. bearing No. 26/20 dated 22-03-2020 was registered for the offences punishable under Sections 147, 354, 323 and 451 respectively of the Indian Penal Code, 1860 (IPC). The Deceased had to be shifted to a hospital as she suffered injuries on her body; however she was declared dead by the doctor on duty. Therefore, the Police added Section 302 of the IPC to the F.I.R.

The post mortem of the Deceased was performed; statements of the various eye witnesses were recorded and various panchnamas were drawn. At the end of the investigation, the Police filed   charge sheet against the Accused persons for the offence of murder along with other offences. The cause of death of the Deceased in the post mortem was shown as “cardio respiratory failure” and no poison was detected in the viscera.

Aggrieved, the Appellant filed a Revision Application bearing No. CM (M) No. 99 of 2020 before the High Court of Jammu and Kashmir at Srinagar (High Court) and challenged the legality and validity of the Order passed by the Trial Court. The High Court upheld the Order dated 23-10-2020 passed by the Trial Court and discharged the Accused persons of the offence of murder vide Order dated 26-11-2020.

Aggrieved by the said Order, the Appellant approached the Hon’ble Supreme Court of India. The Apex Court upon considering the facts of the case framed the following issue:

“Whether the High Court was justified in affirming the Order passed by the Trial Court discharging the Accused persons of the offence of murder?”

The Bench in order to examine the correctness of the Order by virtue of which the Accused persons were discharged from the murder charges referred to Sections 226 of the Code of Criminal Procedure, 1973 (Cr.P.C.), that is reproduced below:

“226. Opening case for prosecution.─ When the accused appears or is brought before the Court in pursuance of a commitment of the case under section 209, the prosecutor shall open his case by describing the charge brought against the accused and stating by what evidence he proposes to prove the guilt of the accused.”

The Apex Court explained the scope of Section 226 of the Cr.P.C. as follows:

“Section 226 of the CrPC permits the prosecution to make the first impression regarding a case, one which might be difficult to dispel. In not insisting upon its right under Section 226 of the CrPC, the prosecution would be doing itself a disfavour. If the accused is to contend that the case against him has not been explained owing to the   non­compliance   with   Section   226   of   the   CrPC,   the   answer would be that the Section 173(2) of the CrPC report in the case would give a fair idea thereof, and that the stage of framing of charges under Section 228 of the CrPC is reached after crossing the stage of Section 227 of the CrPC, which affords both the prosecution and accused a fair opportunity to put forward their rival contentions.”

While deciding the issue, the Supreme Court held as follows:

“33. Once the trial court decides to discharge an accused person from the offence punishable under Section 302 of the IPC and proceeds   to   frame   the   lesser   charge   for   the   offence   punishable under Section 304 Part II of the IPC, the prosecution thereafter would not be in a position to lead any evidence beyond the charge as framed. To put it otherwise, the prosecution will be thereafter compelled to proceed as if it has now to establish only the case of culpable homicide and not murder. On the other hand, even if the trial   court   proceeds   to   frame   charge under   Section   302   IPC   in accordance with the case put up by the prosecution still it would be open for the accused to persuade the Court at the end of the trial that   the   case   falls   only   within   the   ambit of culpable homicide punishable under Section 304 of IPC. In such circumstances, in the facts of the present case, it would be more prudent to permit the prosecution to lead appropriate evidence whatever it is worth in accordance with its original case as put up in the charge sheet. Such approach of the trial court at times may prove to be more rationale and prudent.”

The Apex Court therefore concluded that the Orders dated 23-10-2020 and 26-11-2020 passed by the Trial Court and the High Court respectively is not legally valid and are liable to be set aside. The Supreme Court further observed that Section 226 of the CrPC over a period of time has gone, in oblivion and that before the Court proceeds to frame the charge against the Accused, the Public Prosecutor owes a duty to give a fair idea to the Court as regards the case of the prosecution.