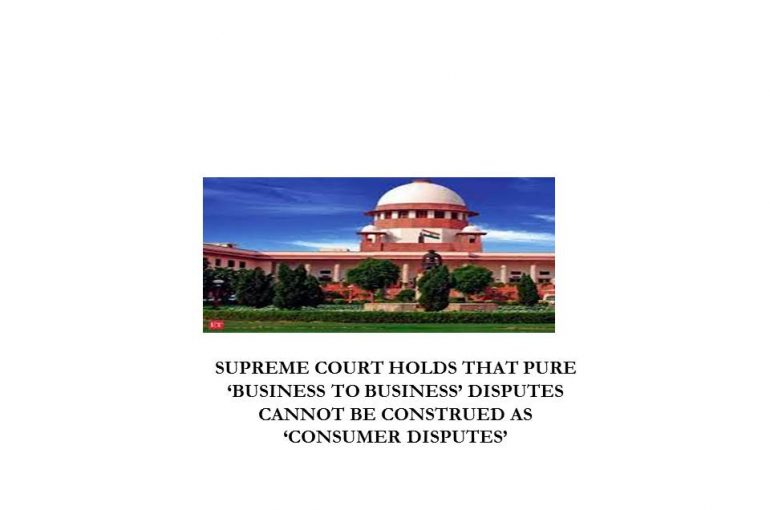 A Division Bench of the Hon’ble Supreme Court of India comprising of Justices L. Nageswara Rao and B.R. Gavai passed a Judgment dated 22-02-2022 in the case of Shrikant G. Mantri v. Punjab National Bank Civil Appeal No.11397 of 2016 and held that pure ‘business to business’ disputes cannot be construed as ‘Consumer Disputes’.

Again on 17-03-2001, the Bank on the request of the Appellant-Complainant enhanced the overdraft facility from Rs.5 Crore to Rs.6 Crore, for a period of one week. Subsequently, due to a steep fall in the share market, the Bank called   upon   the   Appellant­Complainant   to   pledge additional shares to regularize the overdraft account. Therefore, as an additional security the Appellant Complainant vide Letter dated 30-03-2021 pledged 37,50,000 equity shares (Shares) of face value of Rs.10/of unlisted Company Ansal Hotels Ltd. towards the dues of the Bank.

The main contention of the Appellant-Complainant is that he had advised the Bank to sell the pledged shares in December, 2001, so as to close overdraft account, however, there was a failure on part of the Bank as it sold the said shares in November, 2002, when the market value of the pledged shares was at the lowest, thereby causing a loss to the Appellant-Complainant.

After selling the pledged shares for a sum of Rs.2,69,66,215.79 the Respondent-Bank, the successor­in-interest of the Bank filed a Recovery Petition before the Debts Recovery Tribunal, Mumbai against the Appellant-Complainant for recovery of the balance amount due as on 26-12-2002. The said Petition was decreed vide Order dated 26-06-2004. However, thereafter the Parties agreed to settle the matter and a One Time Settlement (OTS) was reached between them on   payment of Rs. 2 Crore.

Since the Respondent-Bank did not return the said shares to the Appellant-Complainant, the later issued a Notice dated 14-06-2005 to the former, seeking release of the said shares and subsequently filed a Complaint before the Commission, alleging deficiency in services on the part of the Respondent­Bank and sought for a relief that the Respondent-Bank be directed to return 3,75,000 shares of ITC Ltd. (earlier 37,50,000 shares of Ansal Hotel Ltd.) along with dividend and all accretions thereon.

Subsequent to this, a Notice was served on the Respondent-Bank. However, the Respondent raised an objection as to the maintainability of the Complaint on the ground that the  Appellant­Complainant was not a consumer according to Section   2(1)(d)   of   the   Consumer Protection   Act, 1986 (Act).  The National   Consumer   Disputes Redressal Commission vide Impugned Order dated 01-06-2016 held that the Appellant-Complainant had   availed   the   services   of the Respondent­Bank   for ‘commercial purpose’ and as such, he was not a consumer as envisaged under Section 2(1)(d) of the said Act.

Aggrieved and dissatisfied, the Appellant-Complainant approached the Hon’ble Supreme Court of India. The Appellant-Complainant averred that since he was engaged in the business of stock-broker and since the services of the said overdraft facility was taken for his profession as a stockbroker, the services rendered by the Bank were exclusively for the purposes of earning his livelihood. After perusing the facts of the case and the averments put forth by the respective parties to the dispute, the Apex Court observed that “when a person avails a service for a commercial purpose, to come within the meaning of ‘consumer’ as defined in the said Act, he will have to establish that the services were availed exclusively for the purposes of earning his   livelihood by means of self-employment.  There cannot be any straitjacket formula and such a question will have to be decided in the facts of each case, depending upon the evidence placed on record.”

The Bench noted that in this case the relations between the Parties are purely “business to business” relationship.

Thus, while dismissing the Appeal, the Apex Court held that As such, the transactions   would clearly come within the ambit of ‘commercial purpose’. It cannot be said that the services were availed “exclusively for the purposes of earning his livelihood” “by means of self-employment”.   If the interpretation as sought to be placed by the   Appellant   is   to   be   accepted,   then   the   ‘business   to business’   disputes   would   also   have   to   be   construed   as consumer disputes, thereby defeating the very purpose  of providing speedy and simple redressal to consumer disputes.”

The Consumer Protection Act has been enacted solely for redressal of disputes pertaining to a consumer. The Act defines a consumer as any [person who buys any Goods or avails any service for a consideration but does not include a person who uses such Goods or Services for any commercial purpose. Hence, the Appeal was rejected by the Hon’ble Supreme Court.