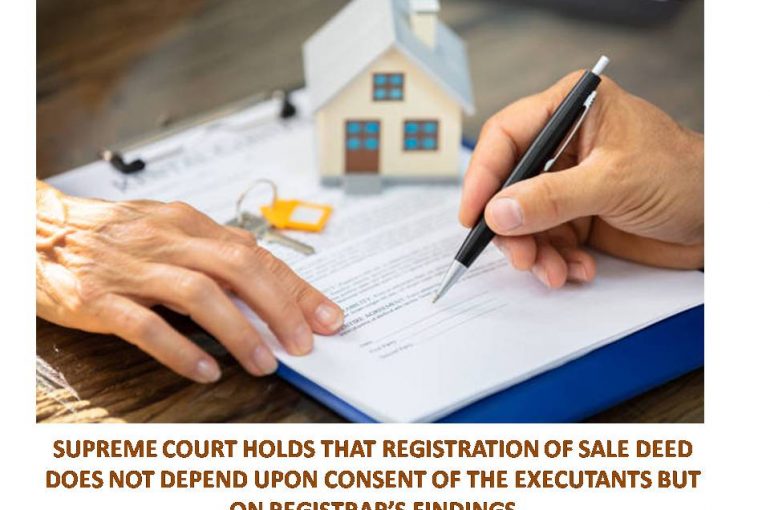 In a recent Civil Appeal , a three Judge Bench of the Supreme Court comprising of Justice Dr. Dhananjaya Y. Chandrachud , Justice A.S. Bopanna and Justice Bela M. Trivedi passed an Order and Judgement dated 10.05.2022 in Veena Singh (Dead) through LR vs. The District Registrar / Additional Collector (F/R) and Another (Civil Appeal No. 2929 of 2022) and  set aside the Order and Judgement  dated 31.05.2018 (Impugned Order) passed by the Hon’ble High Court of Judicature at Allahabad and held registration of sale deed does not depend upon the consent of the executants but on Registrar’s findings that the executants had actually signed the document.

In the present case, a land measuring 3,793 square yards (sq.yd) was owned by one Mr. C.P Singh in Bareilly. After his death, the Appellant-Mrs. Veena Singh ,wife of C.P Singh along with her 2 daughters and 1 son (Legal Representatives) became the joint owner of the said property. The Appellant entered into 2 agreements with a Developer (Respondent No.2- original Defendant) (i) The first was allegedly a Development Agreement in respect of an area admeasuring 1000 square meters in the front portion of the land and (ii) The second was an Agreement to Sell for an area admeasuring 839.4 square meters in the rear portion of the land for a sale consideration of Rs 1.6 Crores, which was executed on 22.10.2010. Between the period of October 2010 and January 2011, the Respondent No.2 paid a sum of Rs. 93,00,000/- to the Appellant and for remaining amount of Rs. 67,00,000/- cheques were issued in the favour of Appellant, which were handed over on 20.06.2011. Thereafter the Respondent No.2 on 15.12.2011, presented the Sale Deed for registration before the Sub-Registrar 1, Bareilly.

Feeling aggrieved by the Order dated 17.02.2012, the Respondent No.2 preferred an Appeal under Section 72 of Registration Act, 1908 (Appeal to Registrar from orders of Sub-Registrar refusing registration on ground other than denial of execution) on 02.03.2012 before the District Registrar, Bareilly. The District Registrar vide Order dated 31.03.2012, allowed the Appeal and set aside the Order of Sub-Registrar dated 17.02.2012 and directed to follow the procedure laid down in Section 74 of Registration Act, 1908 (Procedure of Registrar on such application) to determine whether the Sale Deed has been executed by Appellant or not. The District Registrar also noted that prior to the Sale Deed, an Agreement to Sell had been registered on 22.10.2010 in terms of which the Appellant had received a sum of Rs 93,00,000/- by cash and cheque, as token money towards the total sale consideration of Rs 1.6 Crores. The receipt of the consideration by cheque in pursuance of the Agreement to Sell was stated not to be in dispute by the Appellant. The District Registrar also observed that the signatures and thumb impressions/fingerprints of the Appellant on the Agreement to Sell and Sale Deed had been examined by a handwriting expert, and were found to be identical.

After the Order dated 31.03.2012 of the District Registrar, the Assistant Inspector General, Registration, Bareilly ordered a spot inspection by the Sub-Registrar of the land covered by the Sale Deed. In his Report dated 30.04.2012, the Sub-Registrar concluded that the actual area covered by the Deed was 1341.73 square meters, out of which 740.73 square meters was the area of the Appellant’s house. An F.I.R  was filed by the Appellant on 04.05.2012 at PS Kotwali Sub-District Sadar, Bareilly against the Proprietors of the Respondent No.2 for offences punishable under Sections 420 (Cheating and dishonestly inducing delivery of property), 467 (Forgery of valuable security, will, etc), 468 (Forgery for purpose of cheating), 471 (Using as genuine a forged document or electronic record) and 506 (Punishment for criminal intimidation) of the Indian Penal Code 1860.

Along with these developments, the Appellant challenged the Order dated 31.03.2012 of the District Registrar before the Hon’ble High Court of Judicature at Allahabad under Article 226 of the Constitution. The High Court of Judicature at Allahabad vide Impugned Order dated 31.05.2018 observed that the Appellant had pleaded before the High Court that her signatures and thumb impressions/fingerprints had not been placed on the Sale Deed, but had been forged by the Respondent No.2. However, the High Court noted that there was an improvement in Appellant’s story as in the F.I.R dated 04.05.2012 the Appellant stated that she willingly put her signatures and thumb impressions/fingerprints on the Sale Deed. The High Court observed that whether the signatures and thumb impressions/fingerprints of the Appellant had been forged by the Respondent No.2 raised a disputed question of fact which could only be resolved on the basis of evidence before a competent civil court. Thus the Writ Petition is dismissed while leaving it open for Appellant to approach the competent civil court for a declaration that the Sale Deed had been obtained by fraud and was a nullity.

Feeling dissatisfied by the Impugned Order dated 31.05.2018 of the High Court, the Appellant preferred the present Appeal before the Hon’ble Supreme Court. The Appellant’s contention was that even if a person’s signature on the document is admitted, they can still deny its execution. The main issue therefore considered by the Apex Court was whether the Appellant’s admission of her signatures and thumb impressions/fingerprints on the Sale Deed also amounts to an admission of its ‘execution’.

Yet another contention raised by the Appellant was that the execution of the Sale Deed had been denied by the Appellant and the Sub-Registrar refused to register the same under Section 35(3)(a) of Registration Act (If any person by whom the document purports to be executed denies its execution) and therefore no Appeal would be maintainable under Section 72 of Registration Act.

The Supreme Court held that the registration does not depend upon the consent of the executants but on Registrar’s findings that the executants had actually signed the document. In doing so, the High Court has conflated the mere signing of the Sale Deed with its execution. For the aforesaid reasons, such approach of the High Court is completely erroneous and cannot be upheld.

Thus the Impugned Order dated 31.05.2018 passed by the High Court of Judicature at Allahabad and Order dated 31.05.2021 passed by District Registrar, Bareilly are set aside. However, it is clarified that the present Judgement shall not affect any of the civil/criminal proceedings that are pending in respect of the subject matter of transaction.