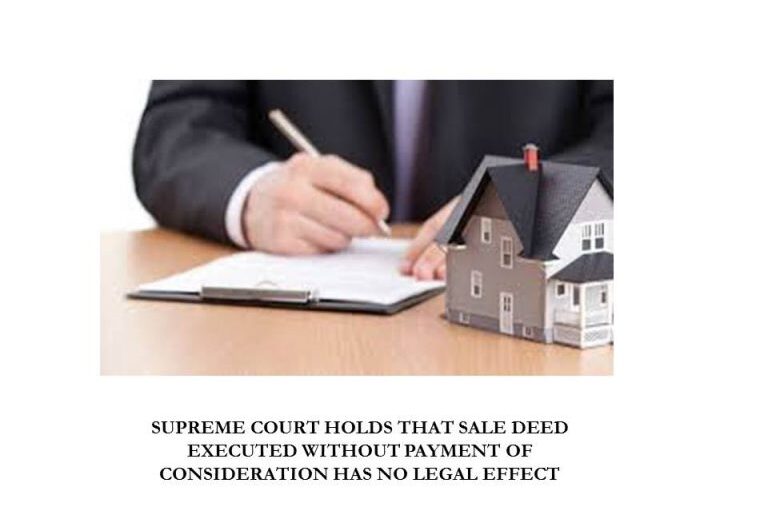 A Two Judge Bench of the Hon’ble #SupremeCourt of India comprising of Justices Ajay Rastogi and Abhay S. Oka passed a #Judgment dated 22-11-2021 in the case of Kewal Krishan v. Rajesh Kumar {Civil Appeal Nos. 6989-6992 Of 2021(Arising out of SLP (C) Nos. 2033-2036 of 2016)} and held that payment of #price is an essential part of a ##sale and that Sale Deed executed without payment of #consideration would not have any legal effect.

On 10-05-1983, two separate Suits were instituted by the Appellant before the Trial Court, Punjab. One Suit was filed against Mr. Sudarshan Kumar and his two Sons and the other Suit was against Mr. Sudarshan Kumar and his Wife. Both the Suits were filed for seeking injunction and for restraining the Defendants from interfering with the possession of the Appellant and from alienating the share of the Appellant in the Suit Properties. Also, a prayer was made for passing a Decree for possession. On 23-11-1985, the Plaints in both the Suits were amended to incorporate the relief sought for declaration that the Power of Attorney and the Sale Deeds that were executed by Mr. Sudarshan Kumar on 10-04-1981 in favour his two Sons and Wife, were null and void.

Before the Trial Court

The Suits filed by the Appellant herein were dismissed by the Trial Court. It was held that the lands were intended to be purchased only by Mr. Sudarshan Kumar and that is how the original Sale Deeds were in possession of Mr. Sudarshan Kumar. The Trial Court accepted the contention of the Respondent that he was the sole owner and the Appellant was the benamidar. Thus, the Sale Deeds and the Power of Attorney were held to be legal and valid. (The date of the Trial Court Orders is not known to us, as it is an old case)

Before the District Court

Before the High Court

While placing reliance on Section 54 of the Transfer of Property Act, 1882, (Act) the Bench observed as follows:

Section 54 of the Act is reproduced below for easy reference:

Contract for sale.—A contract for the sale of immoveable property is a contract that a sale of such property shall take place on terms settled between the parties. It does not, of itself, create any interest in or charge on such property.

The Apex Court further added that no evidence was produced by the Respondent about the payment of the price mentioned in the Sale Deeds as well as the earning capacity of his Wife and the Sons at the relevant time. Hence, the Sale Deeds dated 10-04-1981 were declared as void as they were executed without consideration and as a result, these Sale Deeds won’t confer any right, title and interest on the Respondent’s Wife and Children.

Therefore, while allowing the Appeals and restoring the District Court Order dated 21-05-1988, the Bench observed that as no title was transferred under the Sale Deeds dated 10-04-1981 to the Respondent’s Wife and Children, the Appellant continues to remain the owner of his undivided half share in the Suit Properties. Consequently, the Impugned Judgment and Order of the High Court have been set aside.