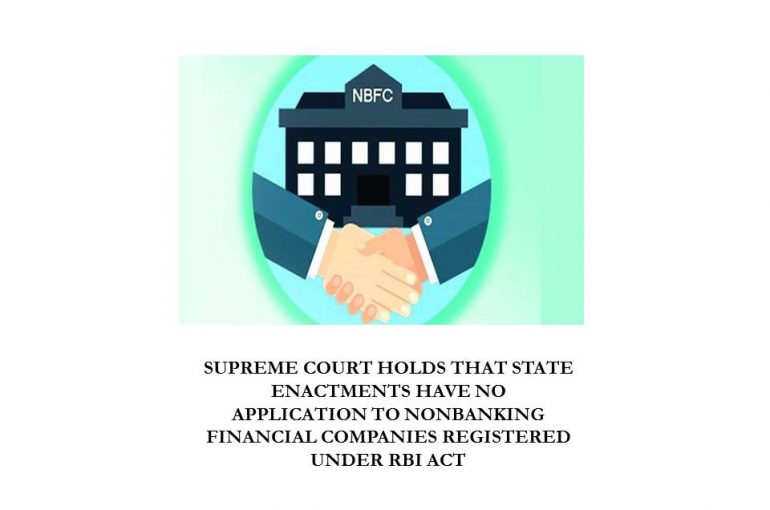 A Division Bench of the Hon’ble Supreme Court of India comprising of Justice Hemant Gupta and Justice V. Ramasubramanian passed a Judgment dated 10-05-2022 in the case of Nedumpilli Finance Company Limited versus State Of Kerala & Ors. (Civil Appeal No. 5233 of 2012) and held that legislative enactments such as Kerala Money Lenders Act, 1958 and  Gujarat Money Lenders Act, 2011 will have no application to Non-­banking Financial Companies (NBFCs) regulated by the Reserve Bank of India (RBI).

In the present case, the NBFCs had filed a batch of Writ Petitions before the High Court of Kerala seeking a declaration that NBFCs registered under the Reserve Bank of India Act, 1934 (RBI Act) will not come within the purview of the Kerala Money  Lenders Act, 1958 (Kerala Act). The NBFCs challenged the Government of Kerala suggestion for NBFCs to take a license under the Kerala Act, failing which penal consequences would be imposed. A Single Judge of the High Court of Kerala (High Court) dismissed the batch of Writ Petitions and the said Order was confirmed by the Division Bench of the High Court.

In Gujarat, the Bombay Money Lenders Act, 1946 (later repealed by Gujarat Money Lenders Act, 2011) that was applicable in the State of Gujarat, was invoked by the Registrar in the Office of the Prevention of Money Lenders, against NBFCs operating in the State. The Division Bench of the High Court of Gujarat disagreed with the view expressed by the High Court of Kerala and allowed the Special Leave Applications holding that Gujarat Act is ultra vires the Constitution for legislative incompetence, to the extent that it seeks to have control over NBFCs registered under the RBI Act. The Gujarat State Government was also restrained from applying the provisions of the Gujarat Act against NBFCs registered under the RBI Act.

Aggrieved, the State of Gujarat, State of Kerala and RBI preferred Appeals before the Hon’ble Supreme Court of India.

The question that arose before the Apex Court was whether NBFCs regulated by the RBI, in terms of the provisions of Chapter III­B of the RBI Act could also be regulated by State enactments such as Kerala Act and Gujarat Act.

The Bench while deciding upon the issue referred to the Scheme of Chapter III B (Provisions Relating to Non-Banking Institutions Receiving Deposits and Financial Institutions) of the RBI Act. The relevant portion is reproduced as follows:

The above scheme of Chapter III­B of the RBI Act shows that the power of intervention available for the RBI over NBFCs, is from the cradle to the grave. In other words, no NBFC can carry on business without being registered under the Act and a NBFC which takes birth with the registration under the Act is liable to be wound up at the instance of the RBI. The entire life of a NBFC from the womb to the tomb is also regulated and monitored by RBI.

Once   it   is   found   that   Chapter   III­B   of   the   RBI   Act provides   a   supervisory   role   for   the   RBI   to   oversee   the functioning of NBFCs, from the time of their birth (by way of registration) till the time of their commercial death (by way of winding up), all activities of NBFCs automatically come under the scanner of RBI. As a consequence, the single aspect of taking care of the interest of the borrowers which is sought to be achieved by the State   enactments gets subsumed in the provisions of Chapter III­B.

“NBFCs which play a very vital role in contributing   to   the   financial   health   of   the   country   and   whose operations are controlled by RBI with the avowed object of operating the currency and credit system of the country to its advantage, have as their life line, the income received by way of interest on the loans advanced. Therefore, to say that RBI has no say in such a matter of vital interest, will strike at the very root of the statutory control vested in RBI. It may be true that many times RBI may not be controlling the rate of interest charged by NBFCs on the loans advanced by them. It does not mean that they have no power to step in. The power to determine policy and issue directions, available under Section 45­ JA can always be invoked by RBI. The fact that RBI generally leaves it to the market forces to determine the rate of interest, without any direct intervention, is not something that could be taken advantage of by the State of Kerala to step in and prescribe the maximum rate of interest chargeable by NBFCs on the loans advanced by them.”

The Apex Court further held that even on an assumption that the Kerala Act was valid in its application to NBFCs when it was made, on the ground that the business of money lending is traceable to Entry 30 of List II (State List), it has to give way for the Parliamentary enactment.

regulation of NBFCs, by inserting certain provisions in Chapter III­B of the RBI Act, the same would cast  a shadow on the applicability (even assuming it is applicable) of the provisions of the Kerala Act to NBFCs  registered  under  the RBI Act  and regulated by RBI.

The Supreme Court thus concluded that the Kerala Act and the Gujarat Act will not have any application on the NBFCs registered and regulated under the RBI Act and therefore allowed all the Appeals filed by the NBFCs against the Judgment of the Kerala High Court and dismissed the Appeals filed by the State of Gujarat against the Judgment passed by the High Court of Gujarat.