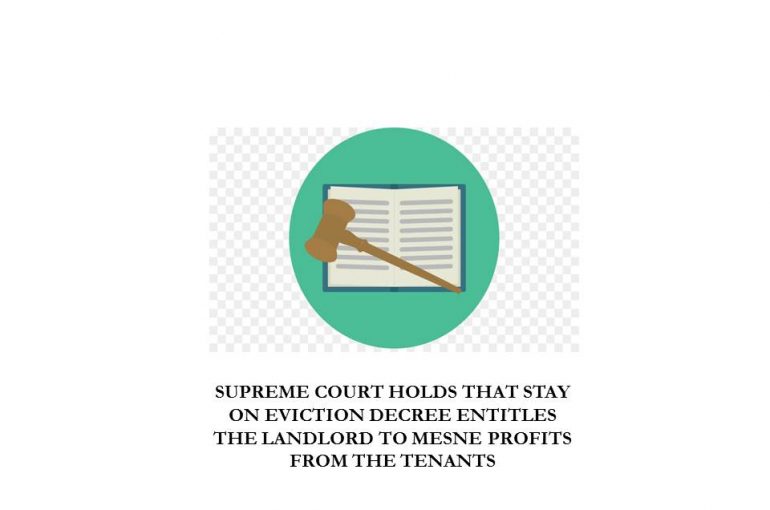 A two Judge Bench of the Hon’ble Supreme Court of India comprising of Justice Indira Banerjee and Justice J.K. Maheshwari passed a Judgment dated 06-07-2022 in the case of M/s Martin & Harris Private Ltd vs Rajendra Mehta (Civil Appeal Nos.  4646­47 of 2022 [Arising Out Of SLP(C) Nos.20243­44 of 2019) and reiterated that once a Decree for eviction is stayed, it is necessary for the Appellate Court to fix the mesne profits to be paid by the tenant to the landlord for continuing the possession of the premises.

In the present case, the Plaintiffs/Respondent who were the owners of the Suit Property at Plot No.1, Block No. D-1, Nagar Nigam No. 2844 (known as Khinduka Bhawan, New Colony, Jaipur) filed a Suit bearing No. 4/2016 (9/2002) (Suit) for eviction, possession, recovery of rent and permanent injunction. The Suit Property was purchased by them through six different registered sale deeds executed on 23-12-1985. By virtue of these sale deeds, Plaintiffs became the owner of the tenanted premises.  The Appellants   were   tenants   to   the erstwhile owner and after selling the premises they became tenant of Plaintiffs/Respondents by   attornment.[1]

The said Suit was filed in November,2002 wherein the Plaintiffs invoked the provisions of Section 13 of the Rajasthan Premises (Control of Rent and Eviction) Act, 1950 (Old Act). This Suit was decreed vide Judgment dated 03-06-2016 which was passed by Senior Civil Judge No.7, Jaipur.

Subsequently, an Appeal was filed bearing No.11/2016 before Additional District Judge No.10, Jaipur which was dismissed on 10-01-2017 and confirmed the Judgment passed by the Trial Court. Thereafter, a Second Appeal bearing No. 144/2017 was filed challenging both the Judgments before the High Court of Rajasthan (High Court) which was admitted vide Order dated 14-10-2017 granting stay on ejectment.

The order of stay was extended from time to time.  An Application was filed under Order XLI Rule 5 read with Section 151 of the Code of Civil Procedure (CPC) by the Plaintiffs/Respondents claiming mesne profit due to continuation of stay on Eviction Decree.

The Appellants vide Order dated 18-05-2018 of the High Court were directed:

This Order dated 18-05-2018 was challenged by   filing   the   Special   Leave   Petition   No.19863/2018 before the Hon’ble Supreme Court of India, which was dismissed as withdrawn with liberty to the Appellants to file Review Petition before the High Court.

The Apex Court relied upon the decisions passed in the case of Marshall Sons & Co. (I) Ltd. vs. Sahi Oretrans  (P) Ltd. and Another – (1999)  2 SCC 325 wherein it was held that “once a decree for possession has been   passed   and  the   execution   is   delayed   depriving   the   decree holder to reap the fruits, it is necessary for the Appellate Court to pass appropriate orders fixing reasonable mesne profits which may be equivalent to the market rent required to be paid by a person who is holding over the property.

In another case of Atma Ram Properties (P) Ltd. vs. Federal Motors (P)Ltd. (2005)  1  SCC 705, Court held that “Appellate Court does have jurisdiction to put   reasonable   terms   and   conditions   as   would   in   its   opinion reasonable to compensate the decree holder for loss occasioned by delay in execution of the decree while granting the stay.” This view has been reaffirmed by the Supreme Court in the case of State of Maharashtra   vs.   Super Max International Pvt. Ltd. and others (2009) 9 SCC 772.

The Bench noted that Rajasthan Rent Control Act, 2001 (New Act), relied upon by the Appellants had come into effect from 01-04-2003 and had no application to the proceedings initiated under the Old Act.

The Apex Court further observed that:

“12. The basis of determination of the amount of mesne profit, in our view, depends on the facts and circumstances of each case considering place where the property is situated i.e. village or city or metropolitan city, location, nature of premises i.e. commercial or residential are and the rate of rent precedent on which premises can be let out are the guiding factor in the facts of individual case.”

The Bench concluded that that the High Court did not commit an error and that there was no fault with the manner of determination of mesne profits adopted by the High Court and hence dismissed the Petitions as withdrawn.

In cases similar to the above, the law provides for compensation to the rightful owner in the event that the said owner is deprived of its right to enjoy his/her property. The concept of such compensation falls within the definition of mesne profits that finds mention in Section 2(12) of the Code of Civil Procedure, 1908. Mesne profits can only be awarded if the property in question is unlawfully occupied thereby depriving the original owner of its rights. In the present case, Interest is a part of mesne profits under Section 2(12). In the present case, the stay in the execution proceedings was depriving the original owner of its right to the Property and as such the Court balanced the equities by awarding mesne profits.

[1] Attornment is the act of granting authority or jurisdiction to a party even though no legal rights exist. It applies mainly to real estate transactions and may occur when a tenant acknowledges a new owner of the property as their new landlord. https://www.investopedia.com/terms/a/attornment.asp