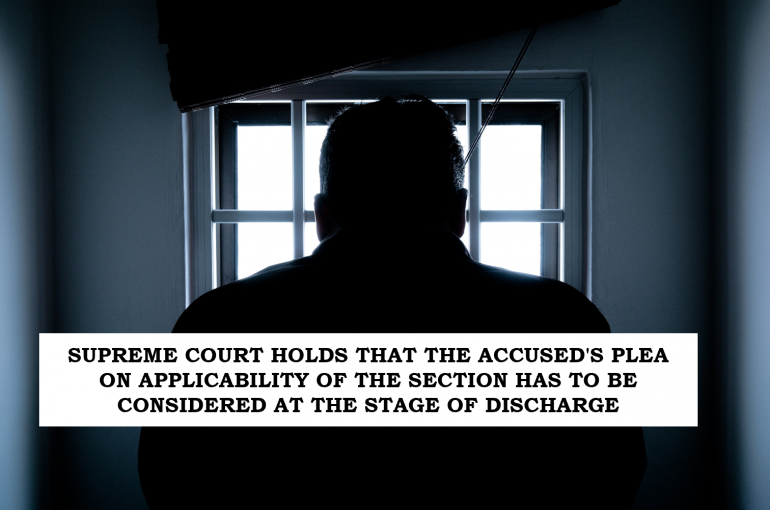 SUPREME COURT HOLDS THAT THE ACCUSED’S PLEA ON APPLICABILITY OF THE SECTION HAS TO BE CONSIDERED AT THE STAGE OF DISCHARGE.

A Two Judge Bench of the Supreme Court comprising Justice MR Shah and Justice CT Ravikumar passed a Judgment dated 12.12.2022 in the case of Chandi Puliya v. The State of West Bengal, SLP (Criminal) No. 9897/2022 and held that the Trial Court ought to consider the plea of the Accused on the applicability of Section 300 (1) of the Code of Criminal Procedure, 1973 (Person once convicted or acquitted not to be tried for the same offence), at the stage of discharge which is a stage before the framing of charge under Section 228 of the Code of Criminal Procedure, 1973 (Framing of charge).

The Complainant Shyamal Acharya, went to Anandapur Police Station to lodge a complaint on 06.06.2011, on the allegation that his father Sh. Ajay Acharya and some other persons being the followers of a particular political party were ousted from their village by the rival political party. On 22.09.2002, Sh. Ajay Acharya and some others went for a meeting with some others in the locality to maintain peace and law and order. When they were returning after the meeting to their house at village Raniorh, the accused persons belonging to the rival political party attacked them with deadly weapons including firearms and committed the murder of seven persons. The body of the father of the Complainant was buried on the ground at village of Piashala. The family members of the said Ajay Acharya did not get any trace of him or his body. On 26.09.2002, the complaint was registered at Kespur Police Station (Complaint). On the basis of the said Complaint the Kespur Police Station registered Case No.61 of 2002 against the Accused persons including the Petitioner under Sections 148 (Rioting, armed with deadly weapon), 149 (Every member of unlawful assembly guilty of offence committed in prosecution of common object), 364 (Kidnapping or abducting in Order to murder), 448 (Punishment for house-trespass) and 506 (Punishment for criminal intimidation) of the Indian Penal Code 1860 (IPC). After the investigation Police submitted a charge sheet on 15.02.2005. After trial, the Petitioner and six other Accused persons were acquitted under Section 235 (1) of the Code of Criminal Procedure by the learned Additional Sessions Judge, 6th Court, Paschim Medinipur by a Judgment dated 21.05.2010.

On 04.06.2011 the defacto Complainant came to know that some human skeletons were found after digging earth near Malikdanga under Police Station Garbeta. The Complainant rushed to the spot and identified one of the said skeletons as that of his father based on the apparel. He therefore lodged a Complaint against the Accused persons under Sections 147/148/149/341/367/449/326/307/302/201/109/114/115/117/120B of the Indian Penal Code 1860. After investigation the Police submitted a charge-sheet in Anandapur Police Station Case No.36 of 2011 against 46 Accused persons including the present Petitioner.

That thereafter on 06.06.2011, after a period of nine years from the date of registration of the first FIR and one year from the date of acquittal, a second FIR came to be lodged against the Appellant and others alleging inter alia that the Appellant and others co-accused had caused the death of Ajay Acharya, i.e., father of the first informant, the same person that they had alleged to have kidnapped and were acquitted of.

The Hon’ble High Court observed that the Accused was acquitted in respect of the offence under Sections 148/149/307/323/364/506 of the Indian Penal Code 1860. That the Accused along with other Accused persons formed an unlawful assembly with deadly weapons, committed criminal trespass caused hurt and admitted to committing murder and also abducted some persons including the father of the defacto Complainant for the purpose of murder. In the subsequent case of Anandapur Police Station Case No.36 of 2011, charge-sheet has been submitted against the Accused and others under Section 302 of the IPC on the allegation that he along with other Accused persons committed the murder of Ajay Acharya. The charge of murder and the charge of abduction for the purpose of murder are completely and distinctly different penal offences. The Accused cannot claim to be discharged from Special Case No.120 of 2018 on the ground that he was acquitted in Keshpur Police Station Case No.61 of 200.

In view of the above discussion, the Court did not find any merit in the instant criminal revision and accordingly, the revision was summarily dismissed.

The Appellant-Accused feeling aggrieved and dissatisfied with the impugned Judgment and Order dated 27.06.2022 passed by the High Court at Calcutta in Revision Application No. 1328/2022, by which the High Court has dismissed the said revision application preferred by the Appellant–Accused and has confirmed the Order passed by the learned Special Court, West Bengal (MP & MLA case), Bidharnagar dated 04.03.2022 passed in Special Case No. 120 of 2018, the Appellant-Accused appealed to the Supreme Court.

The Hon’ble Supreme Court while hearing the Appeal observed that the Accused’s plea on the applicability of Section 300 Cr.P.C., has to be considered at the stage of discharge under section 227 Cr.P.C.

The Hon’ble Court held that in the case of Ratilal Bhanji Mithani v. State of Maharashtra, (1979) 2 SCC 179, the Supreme Court had held that once a charge is framed, the Magistrate has no power under Section 227 of Cr.P.C or any other provision of the Code to cancel the charge, and reverse the proceedings to the stage of Section 353 and discharge the Accused.

The Hon’ble Supreme Court further discussed the case of State v. Nalini, (1999) 5 SCC 253, where the Apex Court while discussing the principle of autrefois convict (that the same person can’t be convicted again on the same case and for the same offences) and autrefois acquit held that Section 300 Cr.P.C.(Person once convicted or acquittal not to be tried for same offence) has widened the protective wings by debarring a second trial against the same Accused on the same facts even for a different offence.

The Apex Court further observed that in the present case, the Trial Court and the High Court have failed to appreciate that the present proceedings arise from the discharge proceedings. The Hon’ble Supreme Court remitted the matter to the Ld. Trial Court to consider the application under section 300(1) Cr.P.C., and the application for discharge under section 227 Cr.P.C. (Discharge) precedes the stage of charge under Section 228 Cr.P.C. (Framing of charge). The Appellant is now being sought to be prosecuted for the offences under Section 302 IPC (Punishment of murder), without invoking Section 346 IPC (Wrongful confinement in secret).

Thus, based on the aforesaid observations, the Hon’ble Supreme Court disposed off the Appeal and quashed and set aside the Impugned Judgment and Order passed by the Hon’ble High Court. The Hon’ble Apex Court remitted the matter to the Ld. Trial Court to consider the application under Section 300(1) Cr.P.C., and the Application for Discharge under Section 227 and the said proceedings have to be completed within a period of six weeks from the date of the receipt of the Judgment dated 12.12.2022 of the Supreme Court.