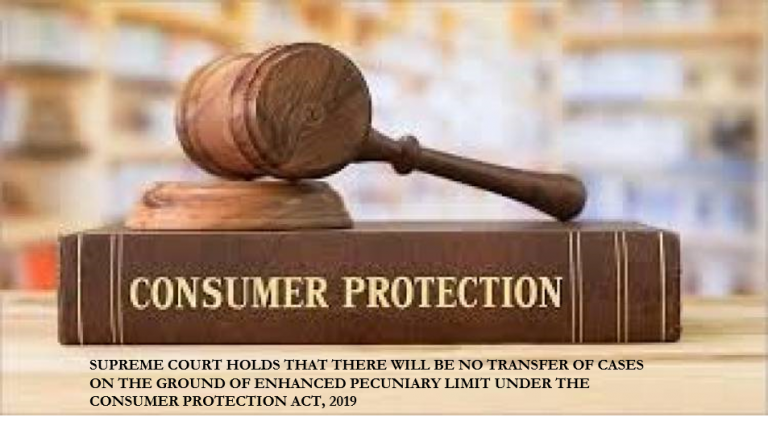 SUPREME COURT HOLDS THAT THERE WILL BE NO TRANSFER OF CASES ON THE GROUND OF ENHANCED PECUNIARY LIMIT UNDER THE CONSUMER PROTECTION ACT, 2019

Recently, the #SupremeCourt of India in the case of Neena Aneja and Others vs Jai Prakash Associates Ltd (Civil Appeal Nos. 3766-3767 of 2020), vide its Judgment dated 16.03.2021 held that #consumercomplaints instituted under the Consumer Protection Act of 1986 (the ‘Act of 1986’) will continue before the same forum and will not be transferred in terms of the modified pecuniary jurisdiction provided under the new #ConsumerProtectionAct, 2019 that came into force on 20.07.2020 (the ‘Act of 2019’).

In 2017 and 2020, the Appellants sought a refund of the paid consideration with interest due to delay in delivering the possession of the Flat. Thereafter, the Appellants-Complainants filed a consumer complaint before the National Consumer Disputes Redressal Commission (‘NCDRC’) on 18.06.2020 (Consumer Complaint). The consumer case was instituted under the provisions of the Act of 1986. During the pendency of the matter, the Act of 2019 was enacted, which repealed the Act of 1986. Hence, the NCDRC, vide its Order dated 30.07.2020, dismissed the Consumer Complaint on the ground that the Claim was of Rs. 2.19 Crores and after the enforcement of the Act of 2019, its pecuniary jurisdiction has been enhanced from Rupees 1 Crore to 10 Crores. Therefore, the Complaint is not maintainable, as the Claim is below the enhanced pecuniary jurisdiction of the NCDRC.

While dealing with the aforesaid issue, the Supreme Court referred to Section 21 of the Act of 1986, which provides for jurisdiction of the NCDRC and pointed out that under the said provision, the pecuniary limits of NCDRC was enhanced from Rs 20 Lacs to Rs 1 Crore. The Supreme Court also looked into other provisions related to the pecuniary jurisdictions of other forums established under the Act.

The Supreme Court considered a number of precedents that have interpreted the impact of change in forum on pending proceedings and principle of retrospectivity and made the following observations:

The Supreme Court observed that it would be incorrect to object the continuation of the proceedings before the NCDRC on the ground that under the Act of 2019, the pecuniary limits of the jurisdiction exercisable by the NCDRC have been enhanced and the Complaint filed by the Appellants which was validly instituted under the Act of 1986 should be transferred to the State Consumer Dispute Redressal Commission (‘SCDRC’). And this course of action will result in thousands of cases being transferred across the country from NCDRC to the SCDRCs and from SCDRCs to the District Commissions.

The Supreme Court finally observed that this will seriously dislocate the interests of the consumers in a manner which defeats the object of the Act of 2019, which is to protect the welfare of the consumers. Thus, the Supreme Court held that there is no explicit provision for transfer of pending cases according to the new pecuniary limits set up for the Forums under the Act of 2019, as this was not the intention of the Legislature. Therefore, all proceedings instituted before 20.07.2020 under the Act of 1986 shall continue to be heard by the same forum and that the cases would not be transferred as per the new pecuniary limits under the Act of 2019.