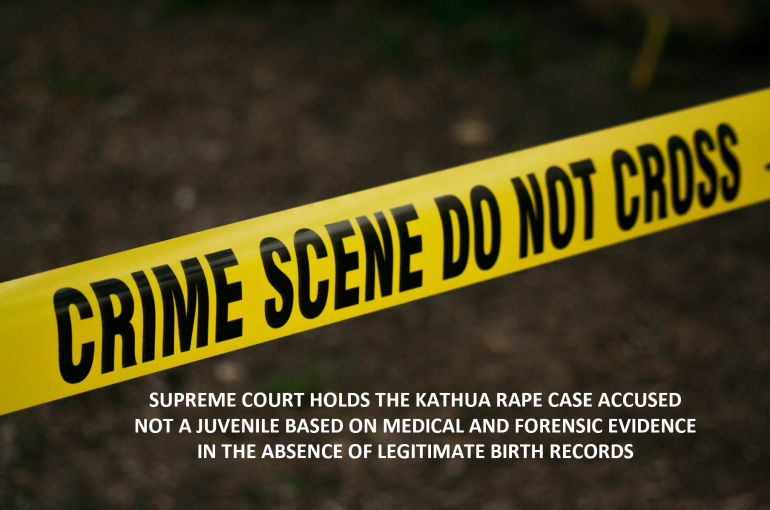 In a recent case of The State of Jammu & Kashmir (Now U.T. of Jammu & Kashmir) & Ors. Vs Shubam Sangra Criminal Appeal No. 1928 of 2022, a two Judge Bench of the Supreme Court comprising of Justice Ajay Rastogi and Justice J.B. Pardiwala passed a Judgment dated 16-11-2022 and held that the alleged Juvenile-Respondent-Accused in the unfortunate Kathua rape case, was indeed not a juvenile at the time of commission of the offence and should be tried the way the other co-Accused were tried in accordance with the law.

The Trial Court’s Order of Conviction was based on the investigation done by a Special Investigation Team (SIT) and the forensic examination which revealed that the minor girl was raped multiple times by the Accused persons including a priest of a temple where the said offence occurred and his nephew, who is the Respondent herein and later she was strangulated to death and was also hit hard on her head by a heavy stone by the Accused persons.

But the adjudication in the present case was only in respect of the 8th Accused / Respondent herein i.e. whether the Respondent was a juvenile on the date of commission of the offence and whether he should be tried the same manner as the other co-Accused had been tried by the Trial Court.

i) That the High Court of Jammu & Kashmir in OWP No. 259 of 2018 had directed a SIT to take steps for determination of age of the Respondent by constituting a Medical Board by Principal, Government Medical College, Jammu and to submit a fresh status report, vide Order dated 21-02-2018. Accordingly, the Special Medical Board undertook the medical examination of the Respondent and submitted an Age Estimation Report dated 03-03-2018 to the District Medical Board. The said Report included his dental age estimation and radiological examination and thereby, concluded that the dental age of the Respondent was between 19 years and 23 years as on 03-03-2018.

ii) That the High Court in OWP No. 259 of 2018 passed an Order dated 14-03-2018 and further directed the Chief Judicial Magistrate, Kathua (CJM) under Section 8 of the J and K Juvenile Justice (Care and Protection of Children) Act, 2013 (JJ Act) as well as Rule 74 of the Rules framed thereunder, to ascertain the age of the Respondent, without being influenced by the aforesaid Age Estimation Report dated 03-03-2018 submitted to the District Medical Board:

iv) But the Respondent relied upon his father’s statement and the records produced by the Executive Officer, Municipal Committee Hiranagar, which depicted that the date of birth of the Respondent was 23-10-2002.

v) Thus, the Ld. CJM vide Order dated 27-03-2018 held that as the birth certificate records issued by the Municipal Committee, Hiranagar in favor of the Petitioner was found to be legitimate, hence, recourse to other modes of age determination such as Medical Report was not permitted, in view of Rule 74 framed under the JJ Act. Thus, it was held by Ld. CJM that, as per the birth certificate records, the age of the Respondent, as on the date of the said Order i.e. 27-03-2018, was 16 years.

vi) That, thereafter, the Appellate-State filed a Criminal Revision Application No. 27 of 2018 before the High Court against the Ld. CJM’s Order dated 27-03-2018, which was rejected vide Order dated 11-10-2019, thereby holding that the Respondent was a juvenile at the time of commission of offence in January 2018.

Aggrieved, the Appellate-State filed an Appeal before the Supreme Court against the High Court Order dated 11-10-2019. The Apex Court vide Judgment dated 16-11-2022 made the following observations:

Thus, the Apex Court held that as the documents evidencing date of birth of the Respondent were not legitimate, hence, the credibility of the final opinion given by the team of five doctors vide the Age Estimation Report dated 03-03-2018 could not have been overlooked in the interest of justice. As a result, the Bench held that the Respondent was not a juvenile at the time of commission of the offence and should be tried the way the other co-Accused were tried in accordance with the law. Therefore, the Supreme Court allowed the Appeal and thereby, set aside the Ld. CJM’s Order dated 27-03-2018 and the High Court Order dated 11-10-2019.

In the recent past, heinous crimes such as rape of minor girls has become a trend. It is really sad to see that humans can come down to this level of depravity which is not even there in the animal kingdom. The above judgement of the Apex Court comes as relief to the parents of such minor girls who have not only been raped but also murdered. The Supreme Court’s observation regarding the determination of the person who claims to be a minor is so succinct and concise and leaves no room for doubt that such offenders cannot hide or take protection of being juvenile if medical evidence shows that the birth certificate is incorrect and the biological age of the offender is much more than what he claims. The punishment meted out to this offender brings relief not only to the unfortunate parents of the minor girl but also to society.