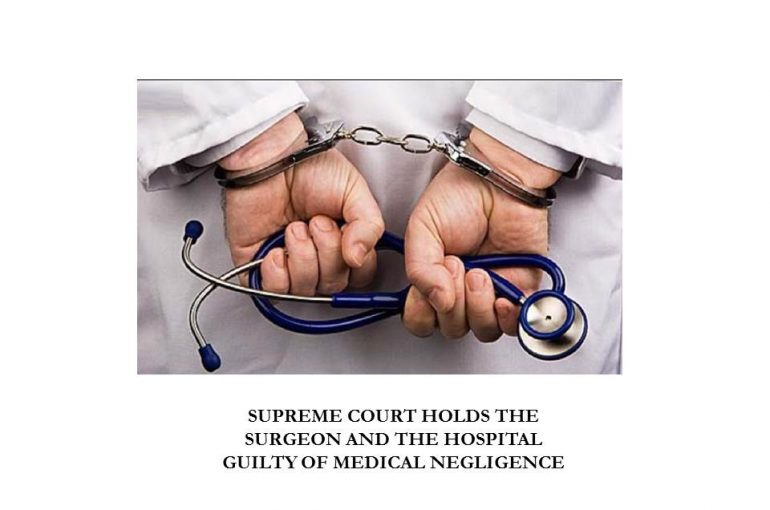 A Three Judge Bench of the Hon’ble Supreme Court of India comprising of Justice Uday Umesh Lalit, Justice S. Ravindra Bhat and Justice Pamidighantam Sri Narasimha passed a Judgment dated 18-05-2022 in the case of Harnek Singh & Ors. versus Gurmit Singh & Ors. [Civil Appeal Nos. 4126-4127/2022 Arising out of SLP (C) Nos. 10782-10783/2020] and held that the Respondents who treated the Patient for removal of gall bladder stones were negligent in their conduct and were thereby guilty of medical negligence and deficiency of services.

In the present case, the Complainant/Appellant was a retired semi-government employee and his wife Late Mrs. Manjit Kaur (hereinafter referred to as Patient) had been working as teacher in a Government School. The Patient developed an abdominal pain for which an ultrasound examination was done and it was revealed that there were stones in the gall bladder. The Patient approached a laparoscopic surgeon (Respondent No. 1) at Preet Surgical Centre & Maternity Hospital, (Respondent No. 2) on 13-07-2004. After due examinations and medical tests, Respondent No. 1 recommended surgery for removing the gall bladder stones and prescribed certain tests to be carried out in advance.

The Respondent No.1 performed a laparoscopic cholecystectomy and placed a drain in the Patient’s abdomen through a surgery on 28-07-2004. Subsequently, the Patient complained of abdominal pain and distension on 29-07-2004. The drainage tube was showing a discharge of fluid which was slightly green in colour, which later on turned greenish-brown. When the Complainant informed the Respondent No.1 about the same, he was told that such fluid was expected and that is why the tube had been inserted. Respondent No. 1 also informed the Complainant that he had reviewed the operative CD and assured that there was no indication of any injury, even in the operative video.

The Doctor advised an urgent abdomen CT scan as he suspected an iatrogenic injury to the bile duct and possibly also to the intestine, during the previous surgery. The Report of the CT scan revealed moderate intra-abdominal and sub-phrenic collection. Respondent No. 3 examined the Patient and the CT scan Report but since the Patient was suffering from multiple ailments like pneumonia, high blood pressure and coagulopathy, immediate surgical intervention was not advised. On 02-08-2004, the Patient’s condition became critical and she showed signs of colonic perforation. On 03-08-2004, an emergency laparotomy was performed. Respondent No.3 informed the Complainant that there was a large collection of intestinal contents in the abdomen due to an injury to the colon and in addition to that there was also a bile duct injury, which would be repaired in a subsequent surgery. The Patient’s condition kept deteriorating and she went into multi-organ failure including failure of the respiratory system, cardiovascular system and renal failure. Unfortunately, the Patient died on 11-08-2004.

While the proceedings were pending before the SCDRC, the Complainant also made a Complaint to the Punjab State Medical Council against the professional misconduct of the Respondents. This Complaint was disposed of on 13-06-2006. Thereafter, the Complainant filed an Appeal before the Medical Council of India (MCI). The MCI considered the Appeal of the Complainant and asked Respondent No. 1 and 3 to appear before the Ethics Committee. The Ethics Committee held Respondent No. 1 medically negligent and issued a “strict warning to be more careful during the procedure and to be more diligent in treating and monitoring his patients during and after the operation.” Respondent 3 was exonerated as no medical negligence was proved against him.

Subsequently, the Complainant filed an Appeal before the National Consumer Disputes Redressal Commission (NCDRC). The NCDRC vide Impugned Judgment dated 05-06-2020 allowed the Appeal of Respondents 1 and 2 and set aside the Order of the SCDRC holding that the Complainants could not prove the negligence on part of the Respondent Nos. 1 and 2.

Aggrieved and dissatisfied, the Complainants approached the Hon’ble Supreme Court of India. The Bench after perusing the facts held as follows:

“Instead of examining the material that was placed on record, NCDRC seemed satisfied with raising and rejecting the plea of res ipsa loquitur and holding that it is impermissible to assume that any sensible professional would intentionally commit an act which would result in an injury to the patient. In these proceedings for damages due to professional negligence, the question of intention does not arise. Unfortunately, the NCDRC did not even refer to the report of the MCI. In fact, a reference to the MCI report would have been sufficient to come to the right conclusion.”

Relying upon the following findings of the MCI, the Apex Court held that it a case of medical negligence leading to deficiency in his services. “NCDRC except referring to the general principles of law as laid down in the judgments of this Court has not attempted to draw its conclusion from the oral and documentary evidence available on record.”

1) “Existence of Generalized peritonitis as a result of bowel perforation. (per the opinion of Professor & HOD, Department of Surgery, AIIMS).

2) There was a significant delay in its diagnosis and operative intervention, first at the local hospital and subsequently at DMC, Ludhiana. (per the opinion of Professor & HOD, Department of Surgery, AIIMS).

3) This has led to the unfavourable outcome. (per the opinion of Professor & HOD, Department of Surgery, AIIMS).

4) Shifting of the patient by Respondent 1 was done in a distant hospital where better GI and ventilatory facilities are claimed. However, the availability of these facilities in the local city is a matter of survey, which should be sought for. (per the opinion of Professor & HOD, Department of Surgery, KGMC, Lucknow).

5) Minor bile leak during surgery is accepted by Dr. Gurmit Singh. This kept on increasing in the post-operative period. Bowel perforation and bile duct injuries were noted in surgery done by Dr. Atul Mishra at Ludhiana. (per the opinion of Professor & HOD, Department of Surgery, KGMC, Lucknow).

6) Gurmit Singh has failed to exercise adequate medical competence in treating the patient as is apparent from the facts. (Experts Common Opinion).

7) There was a large bowel perforation after the laparoscopic operation. (Experts Common Opinion).

8) The complication which though not known in the normal course of time, had occurred in this particular case. This complication could have been prevented if care had been exercised during the procedure by Dr. Gurmit Singh. (Experts Common Opinion).

9) Gurmit Singh failed to suspect the occurrence of the complication despite warning signs/symptoms. (Experts Common Opinion).

a) the patient was not recovering after the operation,

b) the patient’s condition was increasingly deteriorating, and

c) there was a strong indication of a complication occurring after the procedure. (Experts Common Opinion)

11) Failure of Dr. Gurmit Singh to detect the warning signs/symptom led to a delay in diagnosis of bowel perforation and this has, in turn, led to a situation of avoidable delay which eventually cause increased deterioration of the patient. (Experts Common Opinion).”

The Supreme Court while holding that NCDRC has committed an error in reversing the findings of the SCDRC and not adverting to the evidence on record including the report of the MCI allowed the Appeal filed by the Complainant/Appellant on the ground that Complainant/Appellant has made out a case of medical negligence against Respondent Nos. 1 and 2. The Apex Court directed as follows:

a) The Respondents to pay to the Complainant/Appellant a total amount of Rs. 25,00,000 (Rupees Twenty Five Lakhs only) with interest @ 6% per annum from the date of SCDRC Order as compensation. This amount shall be deposited within a period of 6 months from today, failing which it shall carry an interest of 9% per annum.

In today’s world of medical commercialization, this Judgment is most welcome as doctors and hospitals are reminded that they cannot go to any extent to appease their greed. Additionally, it further sends signals and warnings that medical negligence cannot be condoned and though justice takes time, it is finally given to the near and dear ones of the deceased patient.