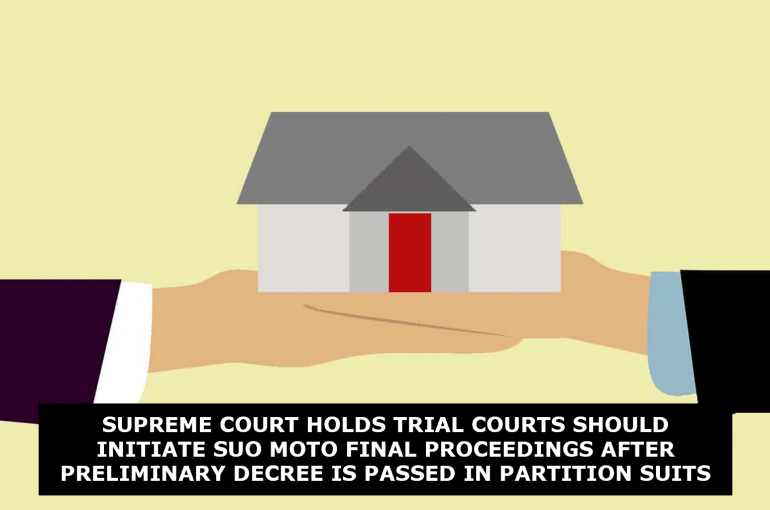 In a recent Civil Appeal, a two Judge Bench of the Supreme Court comprising of Justice S Abdul Nazeer and Justice Vikram Nath passed an Order and Judgement dated 13.06.2022 in ‘Kattukandi Edathil Krishnan and Anr vs Kattukandi Edathil Valsan and ors, Civil Appeal No(S). 6406-6407 OF 2010’ and set aside the Order and Judgement passed by the High Court of Kerala at Ernakulam in A.S. No.102 of 1996(A) and A.S. No.107 of 1996, and held that trial courts should initiate suo-moto final proceedings after preliminary decree is passed in partition suits.

In this case, the Appellants were the original Plaintiffs in the Suit filed in the Trial Court. The property in dispute (Suit Property) belongs to one, Kattukandi Edathil Kanaran Vaidyar, who had four sons, Damodaran, Achuthan, Sekharan and Narayanan. The first Plaintiff was the son of Damodaran, born out of the wedlock with one, Chiruthakutty, and the second Plaintiff was the son of the first Plaintiff. Achuthan had one son, Karunakaran. Sekharan was a bachelor and died without any issue. Narayanan married one Lakshmi and they had a daughter by the name of Janaki, who had died as a spinster. The Plaintiffs filed a Suit for Partition in the Trial Court claiming half share in the Suit Property. One, Karunakaran, the son of Achuthan was the Defendant who died during the pendency of the Suit. Therefore, his legal representatives were brought on record as Defendants No. 2 to 5.

The Defendants contested the Suit by contending that all the children of Kattukandi Edathil Kanaran Vaidyar except Achuthan died as bachelors and Karunakaran is the only son of Achuthan. They denied the contention of
the Plaintiffs that Damodaran had married Chiruthakutty and that the first Plaintiff was the son born to them out of the said wedlock. Their further contention was that Chiruthakutty was not the wife of Damodaran. Thus, it was pleaded by the Defendants that the Plaintiffs were not entitled for any share in the suit property.

The Trial Court on examination of the evidence on record held that Damodaran had a long co-habitation with Chiruthakutty and that due to such co-habitation, it could be concluded that Damodaran had married Chiruthakutty and that the first Plaintiff was the son born out of the said wedlock. The Trial Court accordingly passed a Preliminary Decree for Partition of the Suit Property into two shares and one such share was allotted to the Plaintiffs.

The Defendants, aggrieved by the Judgement of the Trial Court filed an Appeal, A.S. No.107 of 1996 before the High Court of Kerala at Ernakulam. The High Court after appreciation of the evidence on record, remitted the matter back to the Trial Court for fresh consideration. The Plaintiffs challenged this Order of Remand made by the High Court before the Supreme Court and the Apex Court allowed the Appeal by setting aside the Order of Remand with a direction to the High Court to decide the Appeal on the basis of the evidence on record. The High Court, thereafter, heard the Appeal and allowed the same by holding that there was no evidence to establish the long cohabitation between the father and the mother of the first Plaintiff and the documents only proved that the first Plaintiff is the son of Damodaran, but not a legitimate son, and thereby the High Court denied partition of the Suit Property vide Judgement and Order dated 05.02.2009.

The Appellants-Plaintiffs aggrieved by the Judgement and Order dated 05.02.2009 of the High Court, filed an Appeal before the Supreme Court. The Apex Court after considering the documents and evidence on record, observed that it is well settled that if a man and a woman live together for long years as husband and wife, there would be a presumption in favour of wedlock. Such a presumption could be drawn under Section 114 (Court may presume existence of certain facts) of the Evidence Act 1872.

The Supreme Court, further addressed the issue of delay in drawing up the final decrees under Rule 18 of Order XX of the Code of Civil Procedure, 1908 (‘CPC’). This provision deals with decrees in suits for partition or separate
possession of share. The Apex Court held that “Once the shares have been declared and a further inquiry still remains to be done for actually partitioning the property and placing the parties in separate possession of the divided property, then such inquiry shall be held and pursuant
to the result of further inquiry, a final decree shall be passed. Thus, fundamentally, the distinction between preliminary and final decree is that:- a preliminary decree merely declares the rights and shares of the parties and leaves room for some further inquiry to be held and conducted pursuant to the directions made in preliminary decree and after the inquiry having been conducted and rights of the parties being finally determined, a final decree incorporating such determination needs to be drawn up. There is no point in declaring the rights of the parties in one proceedingsand requiring initiation of separate proceedings for quantification and ascertainment of the relief. This will only delay the realization of the fruits of the decree.”

Thus, the Apex Court held that once a preliminary decree is passed by the Trial Court, Courts should proceed with the case for drawing up the final decree suo motu. After passing of the preliminary decree, the Trial Court has to list the matter for taking steps under Order XX Rule 18 of the CPC. The Supreme Court, therefore, after considering all the facts and evidence set aside the Order of the High Court dated 05.02.2009 and allowed the Appeal.