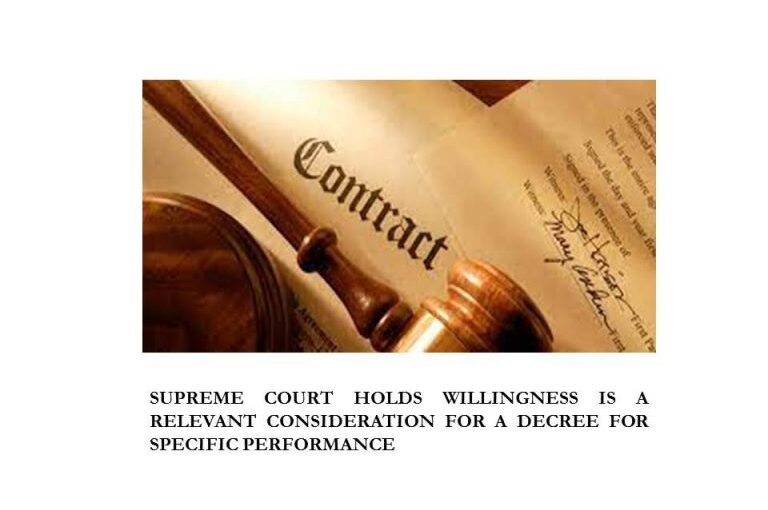 A Two Judge Bench of the Hon’ble #SupremeCourt of India comprising of Justices M.R. Shah, and A.S. Bopanna passed a #Judgment dated 04-10-2021 in the case of K. Karuppuraj v. M. Ganesan, 2021 SCC OnLine SC 857 and held that for the purpose of passing a #decree for #specificperformance, readiness and willingness is a relevant #consideration and the same has to be established and proved.

In the present case, the Plaintiff and the Defendant entered into an agreement for sale (Agreement) of the property situated in Kaspa Coimbatore (Property). The Defendant agreed to sell the same for a sale consideration of Rs. 16.20 lakhs to the Plaintiff. At the time of execution of the Agreement, a part sale consideration of Rs.3,60,001/- was paid. There were certain conditions stipulated in the Agreement. One of the conditions was that the Defendant as the original owner was required to evict the tenants from the Property in question and thereafter to execute the Sale Deed on receipt of the full sale consideration.

Before the Trial Court

The Trial Court on appreciation of the evidence observed that the Plaintiff was not at all willing to purchase the Property with the tenants. Accordingly, the Suit was dismissed and directed the Defendant to refund the advance amount of Rs.3,60,001/- with interest @ 18% p.a. from the date of Agreement till the date of realization, to be paid within a period of two months.

Before the High Court

Aggrieved, with the Judgment and Decree passed by the learned Trial Court dismissing the Suit for Specific Performance, an Appeal was filed by the Plaintiff before the High Court of Judicature at Madras (High Court). Vide Order dated 27-11-2017, the High Court without even considering the evidence on record and without even framing the points for determination, set aside the Judgment and Decree passed by the Trial Court and allowed the Appeal. Consequently, the High Court decreed the Suit for specific performance of the contract.

Before the Hon’ble Supreme Court

Aggrieved and dissatisfied with the impugned Order dated 27-11-2017 passed by the High Court, the original Defendant preferred the present Appeal being Civil Appeal No.6014 of 2021.

After taking into consideration, the facts of the case and the arguments advanced by the Parties to the dispute, the Apex Court observed the following:

1) “While disposing of the appeal, the High Court has not raised the points for determination as required under Order XLI Rule 31 CPC.

3) It also appears that the High Court has disposed of the Appeal preferred under Order XLI CPC read with Section 96 in a most casual and perfunctory manner.

“7. Applying the law laid down by this Court in the aforesaid decisions, if the impugned judgment and order passed by the High Court is considered, in that case, there is a total non-compliance of the provisions of the Order XLI Rule 31 CPC. The High Court has failed to exercise the jurisdiction vested in it as a First Appellate Court; the High Court has not at all re-appreciated the entire evidence on record; and not even considered the reasoning given by the learned Trial Court, in particular, on findings recorded by the learned Trial Court on the issue of willingness.”

The Supreme Court further held that the High Court had incorrectly accepted the Plaintiff’s Affidavit in which the Plaintiff had submitted that he is now ready and willing to execute the Sale Deed. The Apex Court held that reliance upon an Affidavit filed in the First Appeal without submitting any application for amendment of the plaint under Order VI Rule 17 CPC (Amendment of Pleading), go against the provisions of law and cannot be accepted at the appellate stage. Such a procedure is untenable and unknown to law. First appeals can be decided after following the procedure to be followed under the CPC.

The Court further observed that the proper procedure would have been for the Plaintiff to move a proper application for amendment of the plaint in exercise of the power under Order VI Rule 17 CPC, if at all it would have been permissible in a First Appeal under Section 96 read with Order XLI CPC. However, the High Court straightaway relied upon the Affidavit which was incorrect.

The Hon’ble Supreme Court while setting aside the impugned Order dated 27-11-2017 passed by the High Court observed that since there was an absence of willingness on the part of the Plaintiff, the Plaintiff was not entitled to the Decree for specific performance and directed original defendant is directed to refund the amount of Rs.3,60,001/- with 18% interest from the date of Agreement till realization within a period of eight weeks.