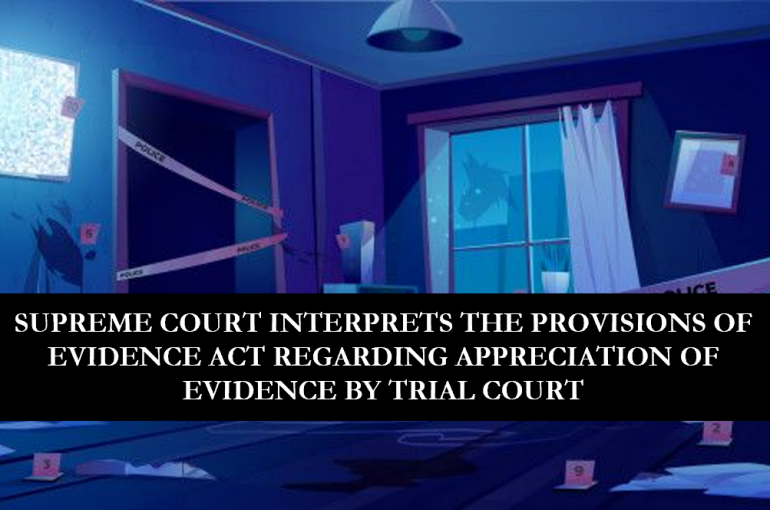 A two Judge Bench of the Hon’ble Supreme Court of India comprising of Justice Surya Kant and Justice J.B. Pardiwala passed a Judgment dated 14-07-2022 in the case of Shahaja @ Shahajan Ismail Mohd. Shaikh vs State of Maharashtra (Criminal Appeal No. 739 of 2017) and interpreted the provisions of Evidence Act 1872 regarding appreciation of evidence by a Trial Court.

In the present case, one, Mahankal Jaiswal (Deceased) and Shahajan Ismail Mohd. Shaikh, the Appellant herein, were working as labourers at various places in the Vile Parle area, Mumbai and knew each other. The Deceased along with the other labourers used to sleep underneath or on the bridge situated near the Vile Parle Railway Station. A quarrel ensued between the Appellant and the Deceased on 10-12-2006 at 10:30 P.M., which was witnessed by the priest (original first informant) Nandlal Ramnihor Mishra (PW-1) of one Hanuman Temple located near the bridge of the Vile Parle Railway Station.

When the Deceased, the PW-8 Udaysingh and others were sleeping on the bridge near the temple, at about 12:00 to 12:15 A.M., the PW-1 Nandlal heard a noise “Dhappa”. The PW-1 and PW-8 saw the Appellant assaulting the Deceased with a hammer on his head.

The PW-1 lodged the First Information Report (Exh. 13) on 11-12-2006 at the Andheri Police Station which came to be registered as FIR No. 91/06 for the offence punishable under Section 302 of the Indian Penal Code, 1860 (IPC). Upon the registration of FIR, the police started with the investigation and statements of various witnesses were recorded. The panchnama of the weapon used in committing the offence i.e. the hammer (Exh.23) was also drawn on 16-12-2006 under the provisions of Section 27 of the Evidence Act, 1872 (Act) (How much of information received from accused, may be proved).

At the end of the investigation, a charge sheet was filed against the Appellant in the Court of the 22nd Metropolitan Magistrate, Andheri for the offence of murder who, in turn, committed the case to the Sessions Court for trial (Trial Court) under the provisions of Section 209 of the Code of Criminal Procedure, 1973 (Cr.P.C.) (Commitment of case to Court of Session when offence is triable exclusively by it). The Trial Court vide Order dated 06-08-2007 framed the charge (Exh.2) against the Appellant for the offence punishable under Section 302 of the IPC.

In the course of the trial, the prosecution examined ten witnesses. The Trial Court while relying upon the oral testimony of both the eye witnesses (PW-1 and PW-8) held that the Appellant is guilty of the offence of murder. The Trial Court also relied upon the evidence of discovery of weapon i.e. the hammer at the instance of the Appellant as one of the incriminating circumstances pointing towards the guilt of the Accused. The Trial Court passed the Judgment and Order of Conviction dated 08-09-2008 and sentenced the Appellant to undergo life imprisonment with fine of Rs. 1,000/- and in default to suffer further rigorous imprisonment of one month.

Impugning the Judgment and Order of Conviction dated 08-09-2008 passed by the Trial Court, the Appellant filed an Appeal being Criminal Appeal No. 449 of 2014 in the High Court of Judicature at Bombay (High Court).

The High Court upon, reappreciation of the entire evidence on record, concurred with the findings recorded by the Trial Court and dismissed the Appeal, vide Judgment and Order dated 10-07-2015.

Aggrieved by the Judgment and Order dated 10-07-2015 passed by the High Court, the Appellant approached the Hon’ble Supreme Court of India.

The Apex Court after perusing the facts of the case and the submissions made by the Parties, observed that both the Courts rightly believed the two eye witnesses. However, the Bench expressed a disagreement and noticed a serious infirmity in the reasonings given by the Trial Court as affirmed by the High Court with regards the discovery of weapon used in committing the offence under Section 27 of the Act.

The Supreme Court placed reliance on Section 27 of the Act which is reproduced below:

The Apex Court observed that the conditions necessary for the applicability of Section 27 of the Act are broadly as under:

(1) Discovery of fact in consequence of an information received from accused;

(2) Discovery of such fact to be deposed to;

Further referring to facts and the Judgment in Dudh Nath Pandey v. State of U. P AIR (1981) SC 911, the Supreme Court observed:

“What emerges from the evidence of the PW-4 & PW-10’s reply is that the appellant stated before the panch witnesses to the effect that “I will show you the weapon concealed adjacent the shoe shop at Parle”. This statement does not suggest that the appellant indicated anything about his involvement in the concealment of the weapon. Mere discovery cannot be interpreted as sufficient to infer authorship of concealment by the person who discovered the weapon. He could have derived knowledge of the existence of that weapon at the place through some other source also. He might have even seen somebody concealing the weapon, and, therefore, it cannot be presumed or inferred that because a person discovered the weapon, he was the person who had concealed it, least it can be presumed that he used it. Therefore, even if discovery by the appellant is accepted, what emerges from the substantive evidence as regards the discovery of weapon is that the appellant disclosed that he would show the weapon used in the commission of offence.”

The Apex Court also observed that in the examination-in-chief of the Panch it does not show that he was read over the panchnama before it was exhibited. The Bench, referring to Murli and another v. State of Rajasthan reported in (2009) 9 SCC 417: (2010) 1 SCC (Cri) 12, observed:

The Supreme Court went ahead to clarify how to interpret Section 27 of the Act for appreciating the evidence of discovery of weapon used in committing the offence, so that the Trial Court does not repeat the same mistake in the future. For appreciating such evidence, reliance may be placed on panchnama, i.e. the statement of the panch witness. The Trial Court has to see whether the police officer has read out the contents of the panchnama to the panch witness, so as to make sure that the witness was aware of such contents and that nothing has been left out in the panchnama, failing which the panchnama cannot be used as a piece of corroborative evidence. In this case, the Trial Court failed to see that the panchnama was not read over to the panch before it was exhibited.

But in this case, based on medical evidence coupled with the testimony of eye-witnesses, the Apex Court held the Accused guilty of committing murder of the Deceased and upheld the High Court and Trial Court Judgments and thereby, dismissed the Appeal.