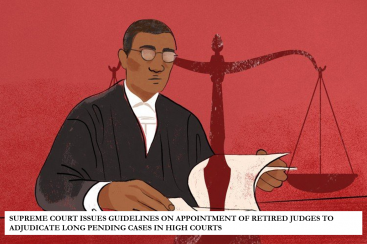 The #SupremeCourt has in a recent case of <strong><em>Lok Prahari through its General Secretary S.N. Shukla IAS (Retd.) vs Union of India and others</em> </strong>has passed a Judgment dated 20-04-2021 and activated a dormant provision of #Article224A of the Constitution of India 1950 (#<strong>Constitution</strong>) for appointment of #adhocjudges to deal with the steep rise in backlog of over 57 Lakh pending cases in various #HighCourts across the country.

The Petitioner herein, Lok Prahari through its General Secretary S.N. Shukla IAS (Retd.), has filed a Public Interest Litigation (<strong>PIL</strong>) and submitted that as there are large number of vacancies of High Court judges and mounting pending cases that require urgent attention, the said issue can be resolved by resorting to Article 224A of the Constitution. Article 224A of the Constitution is reproduced below:

<em>Notwithstanding anything in this Chapter, the National Judicial Appointments Commission on a reference made to it by the Chief Justice of a High Court for any State, may with the previous consent of the President, request any person who has held the office of a Judge of that Court or of any other High Court to sit and act as a Judge of the High Court for that State, and every such person so requested shall, while so sitting and acting, be entitled to such allowances as the President may by order determine and have all the jurisdiction, powers and privileges of, but shall not otherwise be deemed to be, a Judge of that High Court:</em>

<em>Provided that nothing in this article shall be deemed to require any such person as aforesaid to sit and act as a Judge of that High Court unless he consents so to do.</em>

The Apex Court made the following observations and issued certain guidelines for appointment of retired judges as ad-hoc judges of High Courts to deal with the long pending cases (<strong>Guidelines</strong>) in this case:

<strong>1)</strong> That there are over 57,51,312 cases pending for adjudication in courts and around 40% vacancies, which makes it difficult for available/sitting judges to adjudicate pending cases within a reasonable period of time. As per the Data of the National Judicial Data Grid, the High Courts of Allahabad, Punjab &amp; Haryana, Madras, Bombay and Rajasthan are alone responsible for 54% of the total pendency of cases.

<strong>2)</strong> The said issue can be resolved by appointment of retired judges under Article 224A of the Constitution in the following cases:

<strong>d)</strong> The past performance of a retired judge, in terms of quality and quantum of disposal of cases, have to be considered, etc.

<strong>3)</strong> Generally, the Collegium of three senior-most judges presided by the Chief Justice of High Court makes recommendations for the appointment of a High Court judge. However, prior consent of the judge has to be obtained before making his recommendation. The said recommendations are processed by the State Government and thereafter, submitted to the Supreme Court Collegium. Once the names are approved by the Supreme Court Collegium, it is submitted to the Government of India, which either proceeds to appoint the judges or return the same with their reservations over such appointment.

<strong>4)</strong> However, in the case of appointment of retired judge as an ad-hoc judge of the High Court, the following process has to be followed under Article 224A:

<strong>i)</strong> The Chief Justice of a High Court would obtain prior consent of the President of India for appointment of ad-hoc judges.

<strong>ii)</strong> Then, the Chief Justice would request the concerned person who has held the office of a judge of that Court or any other High Court to sit and act as a judge of the High Court for that State.

<strong>iii)</strong> Thereafter, a notification regarding such appointment would be issued in the Gazette of India.

<strong>iv)</strong> The Chief Justice would then decide upon the name of the judge, time period of his appointment, the type of pending cases to be allotted to the particular judge, etc. Further, the monetary benefits and privileges including salary, rent-free accommodation, and other allowances, that a sitting judge is entitled to, the same should be payable to the ad-hoc judge except pension. The said emoluments would be paid from the Consolidated Fund of India.

<strong>v)</strong> The said process should be commenced by the Chief Justice at least three months prior to the appointment of ad-hoc judges.

<strong>vi)</strong> The appointment should be for a period of 2-3 years.

<strong>vii)</strong> Around 2-5 ad-hoc judges may be appointed in a High Court, depending on the strength of the High Court and the problems being faced by them.

<strong>viii)</strong> Long pending cases of over 5 years should be assigned to the ad-hoc judges, but the discretion in this regard is left with the Chief Justice of the High Court.

The Supreme Court further held that the aforesaid Guidelines would be modified from time to time under the Principle of Continuous Mandamus, which is a practice of issuing continuing directions to ensure effective discharge of duties. This is to ensure that the administration of justice translates into tangible benefits. Hence, the matter has been posted for hearing after four months, when the Ministry of Justice has to file a report regarding the progress in terms of implementation of the aforesaid Guidelines.