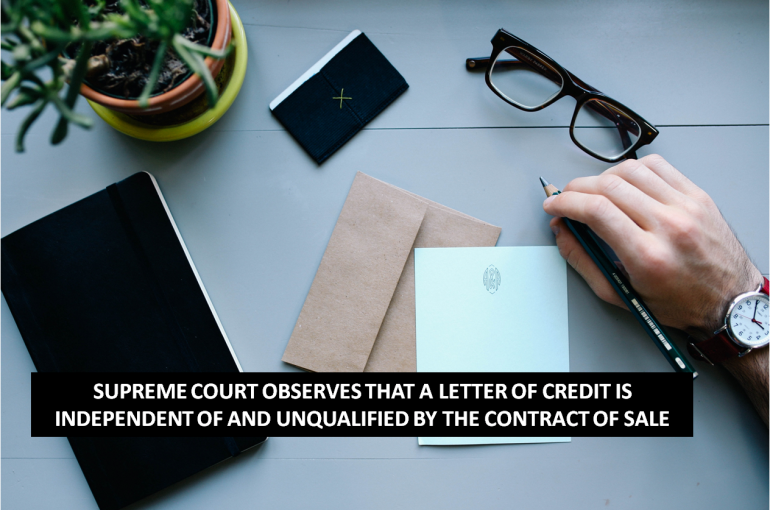 A Two Judge Bench of the Supreme Court presided by Justice B.R. GAVAI and Justice B.V. NAGARATHNA passed a Judgment dated 10.11.2022 in M/s Bawa Paulins Pvt. Ltd. Vs. UPS Freight Services (India) Pvt. Ltd. and Another in a civil appeal arising out of SLP (Civil) No. 16722 of 2015 and observed that a Letter of Credit (LC) is independent of and unqualified by the contract of sale or underlying transactions.

The Appellant, M/s Bawa Paulins Pvt. Ltd entered into a contract with Respondent No.5, County Seat Stores, New York for export of 234 packages of MN’s 100% CTN T messenger bags for a total invoice value of US$ 31,920 (equivalent to Rs.13,79,901/- approximately). The mode of payment was agreed to be through Letter of Credit (“LC”) against the Forwarder Cargo Receipt (“FCR”). For the said purpose, the consignee appointed Respondent No.4, Bank of Boston as the purchaser’s bank through which the LC was opened in favor of the Appellant. Respondent No. 1-3, were appointed as forwarding agents to collect the goods from the Appellant and forward the same.

Immediately after shipping the goods, the Appellant presented the documents including the FCR to its bank, namely, Canara Bank for negotiating with Respondent No.4, Bank of Baroda to release the payment against the LC which was opened in favor of the Appellant. The Bank of Baroda informed Canara Bank that the LC could not be honored on account of discrepancies in the FCR. Further Respondent No.4 Bank informed Appellant’s bank that they had approached Respondent No.5 for approval to pay the sale consideration but they were not willing to honor such request.

The Appellant herein neither got the goods back nor did they get any payment in respect of the said goods and therefore approached the concerned State Commission by way of a Complaint claiming Rs.13,79,901/- as value of goods consigned; Rs.4,53,666/- as interest at the rate of 24% p.a., and Rs.1,50,000/- in lieu of loss of profit.

The State Commission allowed the Complaint filed by the Appellant and directed the Respondents to pay a sum of Rs.13,79,901/- towards loss suffered by the Appellant, Rs.50,000/- towards compensation for mental agony and harassment and Rs.10,000/- towards cost of litigation. In appeal, the National Consumer Dispute Redressal Commission (NCDRC) reduced the compensation to Rs.10, 000/- only along with an interest at the rate of 9% per annum from the date of filing the complaint till the date of payment. Aggrieved by the reduction in the amount of compensation, the Appellant- Original Complainant approached the Supreme Court by way of an appeal.

Whether the compensation ought to have been paid to the Appellant and as to what should be the quantum of the said compensation, if at all the same is to be allowed.

The Hon’ble Supreme Court observed that, in the instant case, the sale of goods was through a ‘FOB’ contract. ‘FOB’ contract means a contract “Free on Board”. By such a contract the seller is to put on board at his own expenses which mean this is a contract for sale of goods to be delivered free on board a ship. The buyer must name the ship upon which they are to be delivered and the seller must put the goods safely on board, meet the cost of doing so and for the buyer’s protection, give possession of those goods to the ship only upon the terms of a reasonable and ordinary bill of lading or other contract of carriage; there the contractual liability of the seller as seller ceases and delivery to the buyer is complete as far as he is concerned. The goods are then at the risk of the buyer, who is responsible for the freight, and subject to the seller reserving its right of disposal, the property passes to the buyer. The price being payable against the bill of lading, goods are at the risk of the buyer and he must pay the price on presentation of the bill of lading even if the goods have been lost.

The Hon’ble Supreme Court further relied on the Judgment in case of Hindustan Steel Workers Construction Ltd. V G.S. Atwal & Co. (Engineers) (P) Ltd. (1995) 6 SCC 76, where the Court held that a letter of credit is independent of and unqualified by the contract of sale or underlying transactions. The autonomy of an irrevocable LOC is entitled to protection and as a rule, courts refrain from interfering with that autonomy. If courts interfere in such transactions, it would be prone to misuse by the applicant party to gain undue advantage leaving the issuing bank at peril in the international financial market.