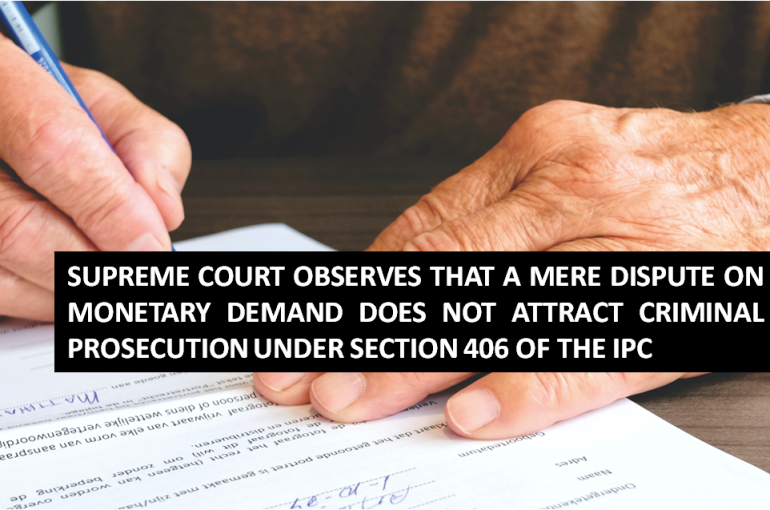 A Two Judge Bench of the Supreme Court presided by Justice Sanjiv Khanna and Justice J.K. Maheshwari passed a Judgment dated 02.01.2023 in Deepak Gaba and Ors.Vs State of Uttar Pradesh and Anr. in Criminal Appeal No. 2328 of 2022 and observed that a dispute relating to demand of money does not attract the offence under Section 405 (Criminal Breach of Trust) of Indian Penal Code.

Jotun India Private Limited (JIPL), is a company incorporated under the laws of India dealing in decorative paints and performance coatings (marine, protective and powder coatings). JIPL through Deepak Gaba – Regional Sales Manager and Shubhankar P. Tomar, the proprietor of Respondent no. 2- Complainant, entered into dealership agreements, for supply and purchase of decorative paints in the State of Uttar Pradesh and Delhi region respectively.

JIPL filed two separate Criminal Complaints on 27.09.2016 under Section 138 (Dishonour of cheque for insufficiency, etc., of funds in the account) of the Negotiable Instruments Act, 1881 against Shubhankar P. Tomar, on account of dishonour of Cheque No. 463151 drawn for Rs. 4,99,610/-, and Cheque No. 003252 for Rs. 1,93,776/-.Both the cheques were dishonoured due to ‘insufficient funds’ upon presentation and subsequently, Legal Notice of demand was issued on behalf of JIPL. After receiving the aforesaid legal notice, a complaint was filed by Respondent no. 2 alleging that a forged demand bill of Rs. 6,37,252.16/- had been raised by the Appellants without ordering of any kind of goods by the Respondent No.2. Though Respondent No.2 had invoked Sections 405, 420 (Cheating and dishonestly inducing delivery of property), 471 (Using as genuine a forged document or electronic record), and 120B (Punishment of criminal conspiracy) of the IPC, the Magistrate issued summons dated 19.07.2018 only under Section 406 (Punishment for criminal breach of trust) of the IPC. The aforesaid Summoning Order was challenged before the Allahabad High Court by the Appellant and the same was dismissed. Aggrieved by the same, the Appellant approached the Supreme Court exercising its Criminal Appellate Jurisdiction.

The Apex Court first noted that, for Section 405 of the IPC to be attracted, the following have to be established: (a) the accused was entrusted with dominion over property; (b) the accused had dishonestly misappropriated or converted to their own use that property, or (c) dishonestly used or disposal should be in violation of any direction of law prescribing the mode in which such trust is to be discharged, or (d) of any legal contract which the person has made, touching the discharge of such trust.

The Apex Court also observed that in the present case, the ingredients to constitute an offence under Section 420 read with Section 415 of the IPC are absent. The pre-summoning evidence does not disclose and establish the essential ingredients of Section 415 of the IPC. There is no assertion, much less legal evidence, to submit that JIPL had engaged in dishonesty, fraud, or intentional inducement to deliver a property. It is not the case of Respondent no. 2, Complainant that JIPL had tried to deceive them, either by making a false or misleading representation, or by any other action or omission; nor is it their case that JIPL had offered any fraudulent or dishonest inducement to deliver a property. As such, given that the ingredients of Section 415 of the IPC are not satisfied, the offence under Section 420 of the IPC is not made out.

The Hon’ble Supreme Court further observed that, the material on record does not reflect and indicate that JIPL indeed had the dishonest/culpable intention for the commission of the alleged offences under the IPC. Unless the ingredients of aforesaid Sections of the IPC are fulfilled, the offence under Section 120-B of the IPC, for criminal conspiracy, would not be made. In fact, a combined reading of the complaint and the pre-summoning evidence does not disclose any element of criminal conspiracy as per Section 120-A of the IPC. The complaint discloses a civil dispute and grievance relating to the claim made by JIPL. What is challenged by respondent no. 2 – complainant is the demand of Rs. 6,37,252.16/- raised by JIPL as the amount payable till the year ending 2016. The demand, even if assumed to be wrong, would not satisfy the ingredients of Section 405, or Sections 420 or 471 of the IPC, so as to justify the summoning order.

Thus, based on the aforesaid reasons, the Supreme Court allowed the appeal and directed to set aside and quash the Summoning Order dated 19.07.2018 as well as the Order issuing non-bailable warrant dated 03.06.2019 passed by the Magistrate, Ghaziabad, Uttar Pradesh.