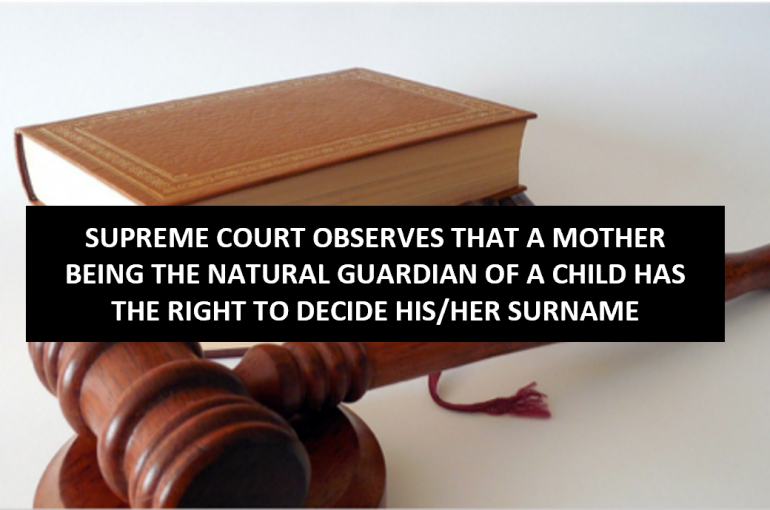 A Two Judge Bench of the Hon’ble Supreme Court of India comprising of Justice Dinesh Maheshwari and Justice Krishna Murari in the matter of Mrs. Akella Lalitha vs. Sri Konda Hanumantha Rao & Anr. Civil Appeal Nos. 6325-6326 of 2015 passed a Judgment dated 28-07-2022 and while allowing the Appeal held that the mother being the natural guardian of the child has the right to change the surname of the child.

On 18-12-2003, Mrs. Akella Lalitha (Appellant) married one, Sri Konda Balaji, son of Sri Konda Hanumantha Rao (Respondent). A child was born out of the said wedlock on 27-03-2006. However, the Appellant’s husband died on 14-06-2006. Thereafter the Appellant married Sri Akella Ravi Narasimha Sarma on 26-08-2007. Presently the child, Master Ahlad Achintya is about 16 years old. On 09-04-2008, the grandparents of the Child, i.e. the Respondents filed a Petition under Section 10 of the Guardian and Wards Act, 1890 (Form of application) to appoint them as Guardians of Master Ahlad Achintha and prayed that the Court may appoint the Petitioners as Guardians of the minor Child and also to grant visiting rights of the Child to them.

The Trial Court vide Order dated 20-09-2011 dismissed the Petition and held that it would not be correct to separate the minor Child from his Mother and further, granted visiting rights to the Respondents. An Appeal was filed before the High Court of Andhra Pradesh by both the Parties and during the proceedings it was informed that the Child’s name had been changed from ‘Konda’ to ‘Akella’. The High Court disposed the Petition vide Order dated 24-01-2014 and directed that the Appellant would be the natural guardian of the Child but would be required to bring the Child to the Respondent’s residence for vacation. The High Court also directed the Appellant to restore the surname of the father of the Child. Aggrieved by the High Court Order, the Appellant filed an Appeal before the Supreme Court.

The issues that were raised by the Appellant before the Supreme Court are:

2) Whether the High Court has the power to direct the Appellant to change the surname of the Child especially when such relief was never sought by the Respondents in their Petition before the Trial Court?

The Supreme Court observed that the Mother is the natural guardian of the Child after the death of the biological father and she cannot be restrained from meeting her Child or changing his surname. The Apex Court also observed that it is settled law that relief not found on pleadings should not be granted. In the present case, the Respondents did not plead to change the surname of the Child before the Trial Court. Thus, the High Court did not have power to grant such relief.

18. In this case while directing for change of surname of the child, the High Court has traversed beyond pleadings and such directions are liable to be set aside on this ground.

19. Before parting with this subject, to obviate any uncertainty it is reiterated that the mother being the only natural guardian of the child has the right to decide the surname of the child. She also has the right to give the child in adoption. The Court may have the power to intervene but only when a prayer specific to that effect is made and such prayer must be centered on the premise that child’s interest is the primary consideration and it outweighs all other considerations. With the above observations the directions of the High Court so far as the surname of the child is concerned are set aside.

Thus, based on the aforesaid observations, the Apex Court allowed the present Appeal and held that the Mother being the natural guardian of the Child has the right to change the surname of the Child and that she also has the right to give the Child for adoption under Section 9 of the Hindu Adoption and Maintenance Act, 1956 (Persons capable of giving in adoption).