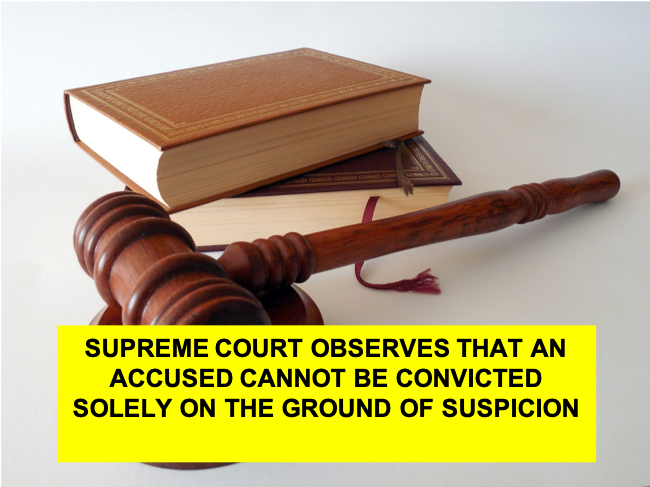 A Two Judge Bench of the Hon’ble Supreme Court of India comprising of Justice B.R Gavai and Justice Pamidighantam Sri Narasimha in the matter of Ram Niwas vs. State of Haryana Criminal Appeal No. 25 of 2012 passed a Judgment dated 11-08-2022 and while allowing the Appeal held that the Accused cannot be convicted solely on the ground of suspicion.

The Complainant and Bhim Singh went back to their village and returned with other family members to the crime scene in the evening. The Complainant lodged a report at the Police Station at 4:45pm and on the basis of the statement, an FIR was lodged with the charges for offences punishable under Sections 302 of the Indian Penal Code (IPC) (Punishment for Murder) and Section 201 IPC (Causing disappearance of evidence of offence, or giving false information to screen offender). The Accused-Appellant pleaded not guilty before the Trial Court. On 12-01-2005, the learned Sessions Judge convicted the Accused-Appellant. The Accused filed an Appeal before the High Court of Punjab and Haryana and the High Court vide Order dated 16-03-2009, dismissed the Appeal. Hence the present Appeal has been filed before the Supreme Court.

The Apex Court observed that it was evident that even though the Complainant and Bhim Singh saw the Deceased’s body in paddy fodder, they did not inform anyone in their village. They also acknowledged that they arrived in their village at around 9.00 a.m but they did not alert the police until 2:30 or 3:00 pm. The only other circumstance on which the Prosecution relies is the seizure of ‘ash’ kept in the plastic bag on the memorandum of the Accused-Appellant­ under Section 27 of the Evidence Act 1872 (How much of information received from accused may be proved). The Prosecution case purely rests on circumstantial evidence.

Thus, the Supreme Court held that the Prosecution has failed to establish the chain of events which can prove the guilt of the Accused. The Appeal was thus allowed and the Orders of the Trial Court and the High Court were quashed and set aside. Hence, the Accused was acquitted of all the charges.