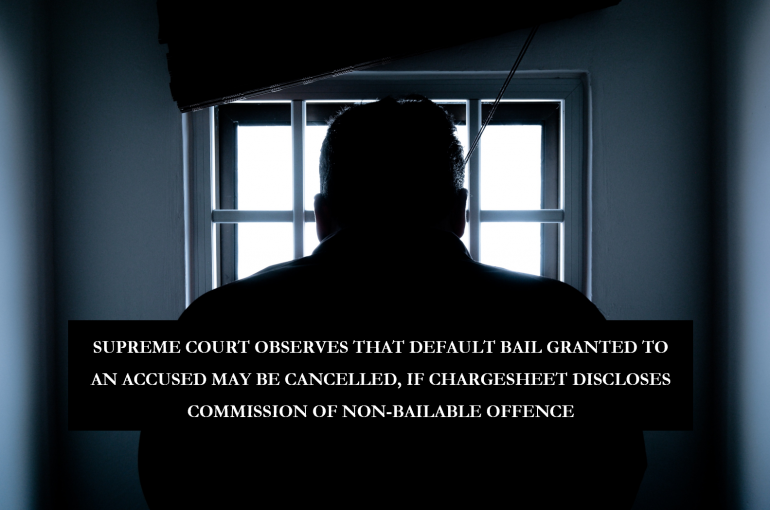 SUPREME COURT OBSERVES THAT DEFAULT BAIL GRANTED TO AN ACCUSED MAY BE CANCELLED, IF CHARGESHEET DISCLOSES COMMISSION OF NON-BAILABLE OFFENCE

A Two Judge Bench of the Supreme Court presided by Justice MR Shah and Justice C.T. Ravikumar passed a Judgment dated 16.01.2023 in The State Through Central Bureau of Investigation Versus T. Gangi Reddy @ Yerra Gangi Reddy in Criminal Appeal No. 37 of 2023 and observed that that when special reasons are made out in a charge sheet which reveal commission of non-bailable offence, in such a case, default bail earlier granted to an accused under Proviso to Section 167(2) of Code of Criminal Procedure 1973 (CrPC) (Procedure when investigation cannot be completed in twenty-four hours) may be cancelled.

One, S. Vivekananda Reddy, an Indian National Congress Leader, was brutally murdered and found dead at his residence in Kadapa District, Andhra Pradesh on 15.03.2019. A case under Section 302 of the Indian Penal Code 1860 (IPC) (Punishment for murder) read with Section 120B IPC (Punishment of criminal conspiracy) was registered for the purpose of investigation. The State constituted a Special Investigation Team (SIT), which took over the investigation. During the investigation, one, T.Gangi Reddy, the Respondent – Accused No.1 was arrested and remanded to judicial custody.

After 90 days in judicial custody, the Respondent filed for default bail under Section 167 CrPC (Procedure when investigation cannot be completed in twenty-four hours) and the same was allowed by the Ld. Judicial Magistrate First Class, Pulivendula vide Order dated 27.06.2019.

Later, as per the Orders of the Hon’ble Andhra Pradesh High Court, CBI was entrusted with the investigation. The final Charge Sheet was filed by CBI on 26.10.2021 which named four people including T. Gangi Reddy.

In view of the same, the CBI moved the Special Court seeking cancellation of bail of the Respondent- T. Gangi Reddy, which was dismissed.

Thereafter, the C.B.I. filed a Criminal Petition No. 788 of 2022 before the High Court seeking cancellation of bail of the Respondent- T. Gangi Reddy, which was dismissed vide Order dated 16.03.2022 on the ground that once T. Gangi Reddy was released on default bail under Section 167(2) CrPC, the bail cannot be cancelled on merits.

Aggrieved by the High Court Order dated 16.03.2022, the CBI filed a Special Leave Petition before the Apex Court.

1) That at the outset, the Hon’ble Supreme Court noted that it cannot be disputed that when an accused is released on default bail under Proviso to sub-Section (2) of Section 167 Cr.P.C., (i) he is released on furnishing the bail bond by him, (ii) as the investigating agency failed to complete the investigation and to file the charge sheet within the stipulated time mentioned therein.

2) That the Proviso to sub-Section (2) of Section 167 fixes the outer limit within which the investigation must be completed and if the same is not completed within the period prescribed therein, the accused has a right to be released on bail, if he is prepared and furnishes the bail.

3) That considering Proviso to Section 167(2) Cr.P.C., it cannot be disputed that a person released on bail under the said provision (default bail) is deemed to be released under provisions of Chapter 33 Cr.P.C., which includes Section 437 Cr.P.C. (When bail may be taken in case of non-bailable offence) and Section 439 Cr.P.C. (Special powers of High Court or Court of Session regarding bail).

5) That the Hon’ble Supreme Court while considering the issue involved, referred to the observations of the Apex Court in the case of Aslam Babalal Desai (1992) 4 SCC 272 and Abdul Basit Alias Raju and Ors. (2014) 10 SCC 754, where it has been held that merits which come out in the ‘charge sheet and attending circumstances’ are relevant and on the basis of the same, bail can be cancelled, but only when strong grounds are made out by the prosecution thereby demonstrating commission of non-bailable offence as mentioned in the charge sheet, but mere filing of chargesheet would not be a ground to seek cancellation of bail. Thus, as per the law laid down by this Court in the case of Aslam Babalal Desai (supra), it is reiterated as follows:

i) That release of accused on default bail under Section 167(2) Cr.P.C. Proviso is not on merits, but on the failure of the investigating agency in completing the investigation and in filing the chargesheet within the time prescribed therein;

6) That the Supreme Court further referred to its earlier judgment of Mohamed Iqbal Madar Sheikh and Ors. (1996) 1 SCC 722, wherein the Apex Court has not taken a contrary view than the view taken in the case of Aslam Babalal Desai (supra). The former was a case of refusing to release the accused on default bail. While releasing the accused on default bail, the Supreme Court observed that if the accused is released on bail because of the default in completion of the investigation, then, no sooner the charge sheet is filed, the order granting bail to such accused cannot be cancelled. It was further observed that for cancelling the bail, the well-settled principles in respect of cancellation of bail have to be made out as observed by this Court in the case of Aslam Babalal Desai (supra). Therefore, as such the observations made by the Apex Court in the case of Mohamed Iqbal Madar Sheikh and Ors. (supra) even supports the case on behalf of the C.B.I. Thus, when special reasons/grounds are being made out from the charge sheet and the charge sheet reveals the commission of a non bailable crime, the default bail granted in favour of a person under Section 167(2) Cr.P.C. Proviso, can be cancelled.

7) That the Supreme Court also observed that the submission on behalf of the Respondent and the view taken by the High Court in the Impugned Order dated 16.03.2022 that once an accused is released on default bail under Section 167(2) Cr.P.C. Proviso, his bail cannot be cancelled on merits, is accepted, on the ground that in that case, it will be giving a premium to the lethargic and/or negligence, may be in a given case of deliberate attempt on the part of the investigating agency not to file the charge sheet within the prescribed time period.

8) That in a given case, if an accused is alleged to have committed a very serious offence like murder, but he manages to get released on default bail, in such case, the aforesaid interpretation may lead to giving a premium to illegality and/or dishonesty. Subsequently, if the investigating officer files a charge sheet and makes out a strong case against the accused that he has committed a very serious offence and a non-bailable offence, the Court would have the power to cancel the bail and to examine the merits of the case.

Thus, based on the aforesaid observations, the Impugned High Court Order dated 16.03.2022 dismissing the CBI’s Application seeking Cancellation of Bail was quashed and set aside and the matter was remitted to the High Court for considering the said Application afresh in accordance with law and on merits and in light of the observations made hereinabove. Hence, to the said extent, the Appeal was allowed.