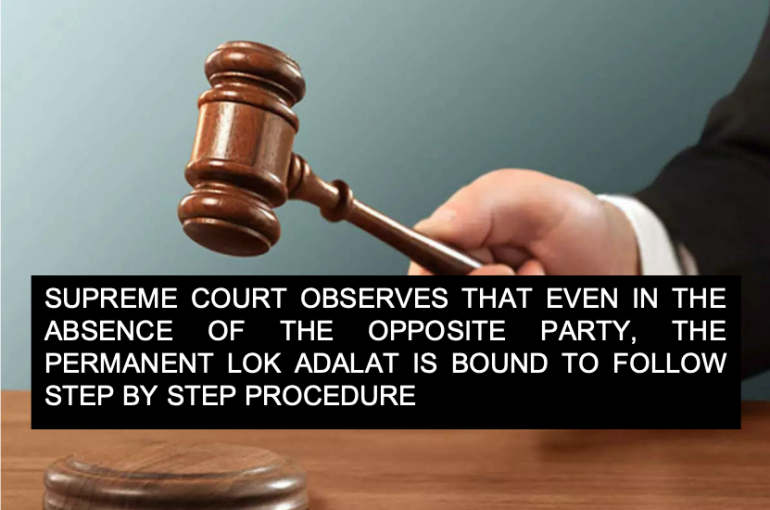 SUPREME COURT OBSERVES THAT EVEN IN THE ABSENCE OF THE OPPOSITE PARTY, THE PERMANENT LOK ADALAT IS BOUND TO FOLLOW STEP BY STEP PROCEDURE

A Two Judge Bench of the Hon’ble Supreme Court of India comprising of Justice Dr. Dhananjaya Y Chandrachud and Justice Pamidighantam Sri Narasimha in the matter of Canara Bank vs. G.S Jayarama Civil Appeal No. 3872 of 2022 passed a Judgment dated 19th May, 2022 and held that even if the opposite party does not appear for the conciliation proceedings, the Permanent Lok Adalat is bound to follow step by step procedure laid down in Section 22-C (Cognizance of cases by Permanent Lok Adalat) of the Legal Services Authorities Act, 1987 (LSA Act)

The Present dispute arose from an application (PLD No. 69 of 2013) filed by the Syndicate Bank (Originally the case was Syndicate Bank vs. G S Jayarama but on 1st April,2020, Syndicate bank merged with Canara Bank. The case is now addressed as Canara bank vs. G S Jayarama) on 31st December, 2012 before the Permanent Lok Adalat at Mangalore under Section 22C (1) of the Legal Services Authorities Act, 1987 (LSA Act). The application was filed against the Respondent and his guarantor in relation to credit facilities obtained by the Respondent from the Appellant in the amount of Rs 2,40,583. The Appellant claimed that the amount of Rs. 2,40,583 plus interest became due on October 1, 2012, but the Respondent failed to repay it despite multiple notices. As a result, the Appellant prayed that the Respondent and his guarantor ought to repay Rs. 2,40,583 plus 15.75 percent interest and costs.

The Appellant filed a Writ Petition before the Karnataka High Court and by the Judgment dated 6th March, 2021, the Division Bench of the Karnataka High Court dismissed the Appeal on two grounds – first, that the procedure for conciliation under Section 22-C of the LSA Act was not followed, and hence, the award was null; and second, that the Permanent Lok Adalat could not have acted as a regular civil court in adjudicating the proceedings.

The two issues that arise in the present Appeal are :

The Supreme Court while addressing the first and second issue, observed that:

27. Section 22-C(8) is amply clear that it only comes into effect once an agreement under Section 22-C(7) has failed. The corollary of this is that the proposed terms of settlement under Section 22-C(7), and the conciliation proceedings preceding it, are mandatory. If Permanent Lok Adalats are allowed to bypass this step just because a party is absent, it would be tantamount to deciding disputes on their merit ex parte and issuing awards which will be final, binding and will be deemed to be decrees of civil courts. This was simply not the intention of the Parliament when it introduced the LSA Amendment Act. Its main goal was still the conciliation and settlement of disputes in relation to public utilities, with a decision on merits always being the last resort. Therefore, we hold that conciliation proceedings under Section 22-C of the LSA Act are mandatory in nature.

34. Consequently, we hold that the observations of the Division Bench in the impugned judgment in respect of the adjudicatory powers of the Permanent Lok Adalats were incorrect, while upholding its ultimate conclusion since the Permanent Lok Adalat failed to follow the mandatory conciliation proceedings in the present case. We make it clear that we have not made any observations on the merits of the dispute between the parties, and all rights and contentions of the parties are kept open.

Hence, based on the aforesaid observations, the Supreme Court upheld the final Judgment of the Division Bench setting aside the Award dated 19th November, 2014 and held that even if the opposite party does not appear for the conciliation proceedings, the Permanent Lok Adalat is bound to follow step by step procedure laid down in Section 22-C.