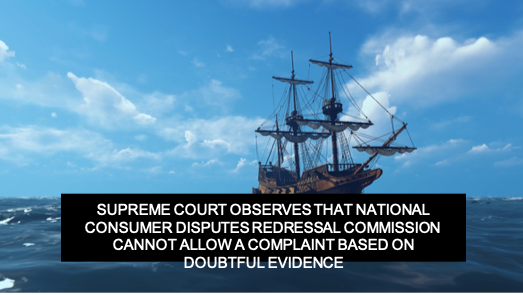 A Two Judge Bench of the Hon’ble Supreme Court of India comprising of Justice Hemant Gupta and Justice V. Ramasubramanian in the matter of M/s The New India Assurance Co. Ltd. Vs. Shashikala J. Ayachi Civil Appeal No. 7573 of 2021 passed a Judgment dated 13-07-2022 and allowed the Appeal of the Insurance Company (Appellant) and observed that there was no deficiency in service on part of the Insurance Company.

The Respondent obtained an insurance policy from the Appellant No.2 herein for Rs.1,62,70,000/­, which covered risks to the Mechanical Sailing Vessel MSV Sea Queen. The policy was valid from 4-10-2010 to 3-10-2011. According to the Respondent, on 30-05-2011, the vessel MSV Sea Queen, which was the subject matter of insurance, sank in the high sea between Oman and Pakistan due to bad weather and rough tides, which damaged the lower portion of the vessel. According to the Respondent-Complainant, when the crew of vessel made a distress call, another vessel named MSV Chetak came to the rescue of the crew. The crew after reaching Mandvi on 03.06.2011, gave statements to the Superintendent of Customs and also gave statement to the Immigration Officer on 04.06.2011. The Respondent-Complainant lodged a claim with the Appellant-Insurer. As the claim was neither admitted nor rejected, the Respondent filed a Consumer Complaint with the National Consumer Disputes Redressal Commission.

Thereafter, the Appellant-Insurer rejected the claim on the grounds that the Respondent’s vessel was engaged in illegal activities and was hijacked by Somali pirates and according to the Meteorological Reports of India and Oman, the weather conditions were fair and there was no bad weather on 30-05-2011.

The National Consumer Disputes Redressal Commission allowed the Claim of the Respondent and recorded the following:

(i)  that though the incident took place on 30.05.2011, the surveyor was appointed on 3.06.2011 and a Final Survey Report was sent on 25.03.2013, the claim was repudiated by the appellant only on 4.09.2013, which was after more than two years of the incident and that therefore the inordinate delay violating Regulation 9 of the Insurance Regulatory and Development Authority (Protection of Policyholders’ Interests) Regulations, 2000, constituted deficiency in service;

(ii)  that though the insurer raised a dispute with regard to the place and nature of the incident, the claim of the respondent­ complainant in this regard was supported by the statement of the crew members of the subject vessel which was recorded by the Superintendent of Customs and the Immigration Officer, while the plea of the insurer was not supported by any evidence;

(iii) that the Report of the Meteorological Departments relied upon by the insurer had nothing to do with the place of the accident;

(iv) the plea of the respondent­ complainant that SOS/ distress calls were made from the sinking vessel, was corroborated by the statement of the crew members; and

(v) that it was too late for the insurer to raise a dispute with regard to the value of the vessel.

On the basis of the above findings, the National Consumer Dispute Redressal Commission directed the Appellant-Insurer to pay a sum of Rs. 1,62,70,000/- with interest @ 9% per annum to the Respondent.

The Supreme Court of India observed that the National Consumer Dispute Redressal Commission failed to notice a lot of questions remained unanswered and there were missing links in the version of the Respondent’s claims. Firstly, the Respondent-Complainant failed to mention the exact location where the incident took place. Secondly, the Marine Casualty Report dated 16-07-2012 reported that there was a rough weather on the day of the incident but did not mention anything about bad weather. Thirdly, the time of the SOS call by the crew and the arrival of the rescue team was same which did not add up. Fourthly, the enquiry by the Surveyors with Muscat Radio revealed that there were no SOS calls made from the Nakhuda of MSV Sea queen.

Thus, the Supreme Court observed that:

24. Therefore, we are of the view that the Consumer Forum which has a limited jurisdiction to find out if there was any deficiency in service, could not have allowed the complaint on the basis of sketchy pleadings supported by doubtful evidence. The delay on the part of the Insurance Company in securing the Final Survey Report and the further delay in issuing the letter of repudiation, cannot per se lead to the complaint being allowed. The delay in processing the claim and delay in repudiation could be one of the several factors for holding an insurer guilty of deficiency in service. But it cannot be the only factor.

25. Therefore, we are of the considered view that the National Consumer Disputes Redressal Commission was in error in allowing the complaint. There was no categorical evidence of any deficiency in service on the part of the appellant­-Insurance Company. Hence the appeal is allowed and the impugned order of the National Commission is set aside. However, there will be no order as to costs.

Hence based on the aforesaid observations, the Supreme Court allowed the present Appeal and held that there was no deficiency in service on the part of the Appellant-Insurer and the delay on the part of the Insurance Company in securing the Final Survey Report and the further delay in issuing the letter of repudiation, cannot lead to the complaint being allowed.