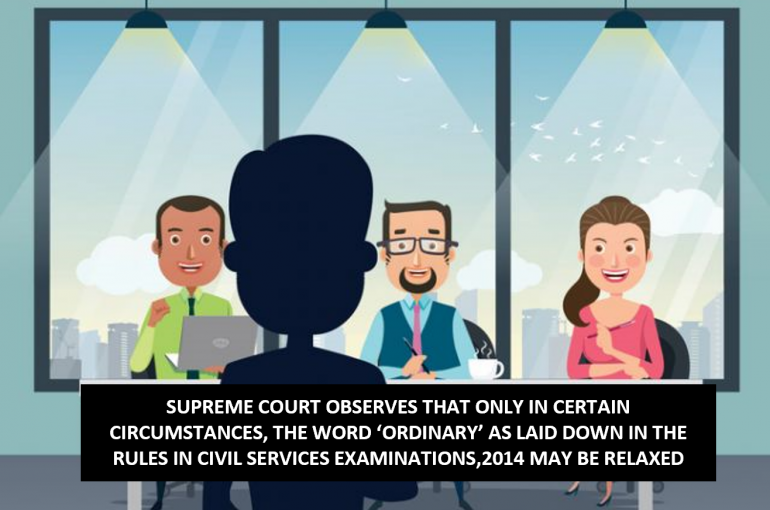 SUPREME COURT OBSERVES THAT ONLY IN CERTAIN CIRCUMSTANCES, THE WORD ‘ORDINARY’ AS LAID DOWN IN THE RULES IN CIVIL SERVICES EXAMINATIONS,2014 MAY BE RELAXED

A Two Judge Bench of the Hon’ble Supreme Court of India comprising of Justice Ajay Rastogi and Justice Vikram Nath in the matter of Union of India vs. K. Rajashekhara Reddy and Another Civil Appeal No. 4569 of 2022 passed a Judgment dated 14-06-2022 and while allowing the Appeal directed that the Appellant may consider the case of the Respondent for appointment of the post under the Civil Services Examination (CSE, 2014) based on the re-medical examination which is subject to police verification, pay scale etc.

The Union Public Service Commission (UPSC) announced the Civil Services Examination, 2014 on 31-05-2014, with 24 participants being recruited for Group A and Group B positions. The Respondent also participated in the selection process and, after passing the preliminary examination, appeared in the main examination held in December 2014 and was called for an interview on 02-06-2015. The Respondent attended the medical examination on 03-06-2015, and the medical examination reports were uploaded to the website on 17-06-2022. However, the result of the said medical report indicated that the Respondent’s Body Mass Index (BMI) was 32, and the required BMI should not be greater than 30. As a result, the Respondent was declared ‘temporarily unfit’.

The Tribunal dismissed the Application by Order dated 05-09-2017 and held that no efforts were made by the Respondent in making an application for re-medical examination within the stipulated time of six months. The Respondent challenged the Order of the Tribunal in the High Court of Judicature at Hyderabad for the State of Telangana and Andhra Pradesh by filing a writ petition under Articles 226 and 227 of the Constitution of India.

The High Court held that the word ‘ordinarily’ as referred to under Rule 7(a)(vii) of Appendix-III of the CSE Rules, 2014 can be exercised for relaxation upon the discretion of the Court in special cases. Thus, by Judgment dated 06-04-2021, the High Court directed the Respondent to take a re-medical examination and also take further consequential steps within a period of four weeks. Thus, an Appeal was filed by the Appellant before the Supreme Court of India.

The Supreme Court of India referred to the Rule 7(a)(vii) of Appendix-III of the CSE Rules, 2014 which states as under:

“In case of candidate who is to be declared “Temporary Unfit”, the period specified for re-examination should not ordinarily exceed six months at the maximum. On re-examination after the specified period these candidates should not be declared temporarily unfit for a further period but a final decision in regard to their fitness for appointment or otherwise should be given.”

The Supreme Court observed that in special cases where a person may not be able to complete his/her medical examination within a period of six months, the word ‘ordinarily’ may be considered for relaxation to a limited extent but the excuse that is presented by the Respondent that as the consolidated reserve list was published on 19-01-2016 and that the Respondent filed an application on 10-03-2016 which was within the stipulated time of six months was neither valid justification nor it adheres to the Rules laid down in CSE Rules, 2014.

Thus, the Supreme Court observed that:

Hence based on the aforesaid observations, the Supreme Court allowed the present Appeal and quashed and set aside the Judgment passed by the High Court.