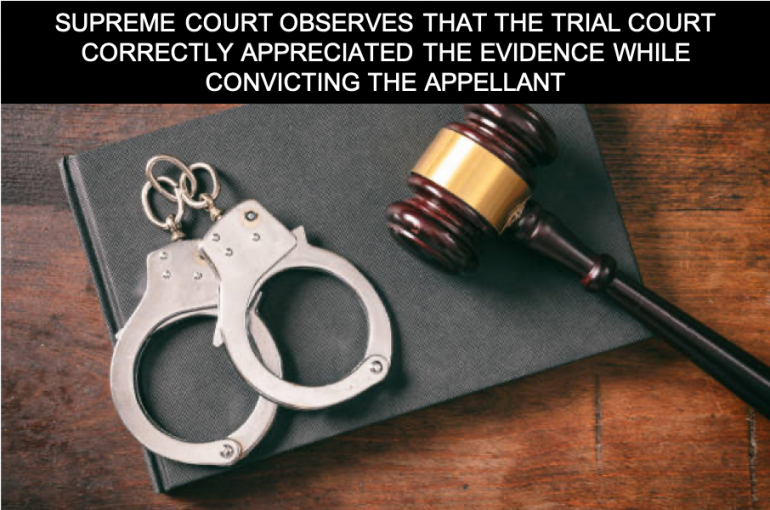 A Two Judge Bench of the Hon’ble Supreme Court of India comprising of Justice Indira Banerjee and Justice J.K. Maheshwari in the matter of Harpal Singh vs. State of Punjab Criminal Appeal No. 914 of 2022 passed a Judgment dated 05-07-2022 and held while dismissing the Appeal that the findings of fact recorded against the Appellant and the other co-accused, who have not come forward in the Appeal before the Court, are neither perverse nor illegal so as to warrant interference by this Court.

On 03.04.2000, Inspector Atma Singh (hereinafter referred to as ‘the Investigating Officer/IO) received information regarding murder of deceased Banarasi Dass while on a patrol duty. When the IO arrived at the deceased’s home, the complainant Leela Wati, deceased’s wife made a complaint, claiming that the deceased worked in the store Sunder Shoes with his son. On the night of the incident, the complainant woke up suddenly and discovered that a Sikh youth, aged about 35–36 years old who was holding a dagger, as well as a clean shaved man, aged about 30–32 years old, had entered the home. They first strangled the deceased, who was lying on the bed and then stabbed him with a dagger above the stomach. The Sikh youth then demanded the Godrej Almirah keys from the complainant and then trapped her in the restroom. Both of the attackers stole money, gold jewelry, and other items before fleeing.

On the initial search, the Complainant discovered that the attackers had stolen six gold bangles, Rs. 7000 cash and other gold items. A formal FIR No. 51 dated 03.04.2000 was recorded at the Police Station Kotwali, Amritsar, for the offences under Sections 460 (All persons jointly concerned in lurking house-trespass or house-breaking by night punishable where death or grievous hurt caused by one of them), Section 342 (Punishment for wrongful confinement), Section 120B (Punishment of criminal conspiracy) and Section 34 (Acts done by several persons in furtherance of common intention) of the Indian Penal Code (IPC).

The IO conducted the inquest proceedings and evidences were kept in sealed parcels. On 03.05.2000, Accused Bikramjit Singh, Ashwani Kumar and Gulzar Singh were arrested. On 10.05.2000, Accused Harpal Singh (Appellant) and Pavitar Singh were arrested. From all the accused, total 48 gold biscuits, gold jewellery, cash and a dagger was recovered. All the recovered items were identified by Vinod Kumar Gambhir, son of the deceased.

In the Judgment dated 04.02.2003, the Learned Sessions Judge in Amritsar found all of the Accused persons guilty of the charge brought against them under Section 302/120B of the Indian Penal Code and sentenced them for imprisonment of life and to pay a fine of Rs. 1000/- and in default further rigorous imprisonment for six months. All the Accused filed an Appeal before the High Court of Punjab and Haryana. In the Impugned Order dated 17.10.2019, the High Court, while dismissing the Appeal, held that the conviction of the Appellant for the charges were proved beyond reasonable doubt. Thus the present Appeal.

The Supreme Court thus observed that :

Hence based on the aforesaid observations, the Supreme Court while affirming the view taken by the High Court and the Trial Court, dismissed the present Appeal and held that the Trial Court and High Court have rightly appreciated the evidence that proved the charges and that convicted the Appellant and the co-accused.