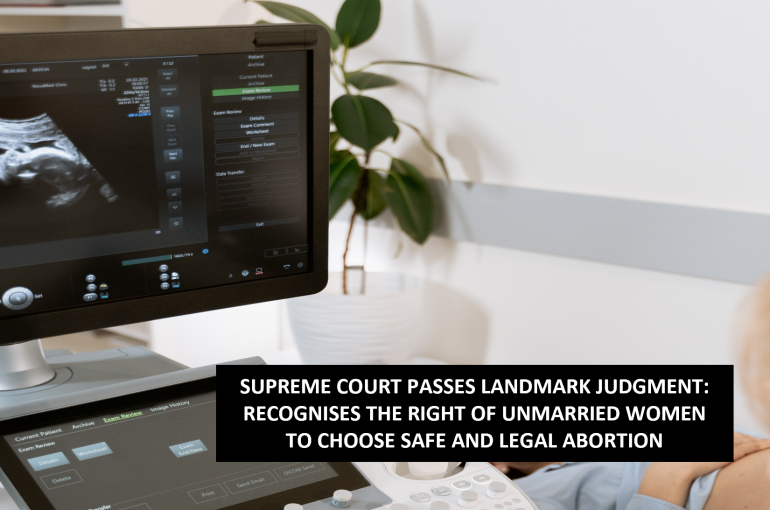 The World Health Organisation (WHO) says “Abortion care is health care, and health is a human right”.

In one of the historic Judgments passed by a three Judge Bench of the Supreme Court comprising of Justice Dr Dhananjaya Y Chandrachud, Justice A S Bopanna and Justice J B Pardiwala in the matter of X vs The Principal Secretary, Health and Family Welfare Department, Govt. of NCT of Delhi & Anr. Civil Appeal No 5802 of 2022 on 29-09-2022, the Apex Court made observations about the reproductive autonomy of every pregnant woman, married or unmarried, to choose medical intervention to terminate her pregnancy. Incidentally, the said Judgment dated 29-09-2022 was passed a day after the world marks the International Safe Abortion Day on 28-09-2022.

In the present case, the Appellant, an Indian Citizen, permanent resident of Manipur but currently residing in New Delhi, is an unmarried woman aged about 25 years, who had become pregnant as a result of a consensual relationship. At the time of filing the Writ Petition before the Hon’ble Delhi High Court i.e. around June 2022, she was carrying a pregnancy with gestation age of 22 weeks. The term ‘gestation’ generally refers the time during which a woman carries a foetus in her womb, from conception to birth. The Appellant wanted to terminate her pregnancy, as (i) her partner refused to marry her at the last stage, (ii) due to the social stigma pertaining to unmarried parents, (iii) in the absence of source of livelihood, she was not mentally prepared to raise and nurture the child as an unmarried mother and (iv) continuation of unwanted pregnancy would involve a risk of grave and immense injury to her mental health.

Hence, the Appellant filed a Writ Petition before the Hon’ble Delhi High Court seeking (a) termination of her ongoing pregnancy, as per Section 3 (2) (b) of the Medical Termination of Pregnancy Act, 1971 (MTP Act) which allows a registered medical practitioner to terminate the pregnancy that has exceeded 22 weeks but not more than 24 weeks, in good faith to save the life of a pregnant woman or the unborn child from risk of abnormalities. Hence, she sought for such medical termination before 15-07-2022, as after such date, the pregnancy would be around 24 weeks and then her relief would become infructuous. (b) She also sought to restrain the Respondent-Authority from taking any coercive action or criminal proceedings against the Appellant or any registered medical practitioner terminating her pregnancy. (c) She further sought directions to be issued to the Respondent-Authority to include unmarried woman within the ambit of Rule 3B of the MTP Rules 2003, as amended in 2021 (Women eligible for termination of pregnancy up to twenty-four weeks). (d) The Appellant also filed a Criminal Miscellaneous Application 30708/2022 seeking grant of interim relief to terminate her pregnancy during the pendency of the Writ Petition.

The relevant provisions of MTP Act and Rules are reproduced below for quick reference:

MTP Act: Section 3: When pregnancies may be terminated by registered medical practitioners

(1) Notwithstanding anything contained in the Indian Penal Code (45 of 1860), a registered medical practitioner shall not be guilty of any offence under that Code or under any other law for the time being in force, if any pregnancy is terminated by him in accordance with the provisions of this Act.

(2) Subject to the provisions of sub-section (4), a pregnancy may be terminated by a registered medical practitioner,—

(a) where the length of the pregnancy does not exceed twenty weeks, if such medical practitioner is, or

(b) where the length of the pregnancy exceeds twenty weeks but does not exceed twenty-four weeks in case of such category of woman as may be prescribed by rules made under this Act, if not less than two registered medical practitioners are,

of the opinion, formed in good faith, that—

(ii) there is a substantial risk that if the child were born, it would suffer from any serious physical or mental abnormality. …

MTP Rules 2003, as amended in 2021: 3B. Women eligible for termination of pregnancy up to twenty-four weeks

The following categories of women shall be considered eligible for termination of pregnancy under clause (b) of subsection (2) Section 3 of the Act, for a period of up to twenty-four weeks, namely:-

(a) survivors of sexual assault or rape or incest;

(c) change of marital status during the ongoing pregnancy (widowhood and divorce);

(d) women with physical disabilities [major disability as per criteria laid down under the Rights of Persons with Disabilities Act, 2016 (49 of 2016)];

(f) the foetal malformation that has substantial risk of being incompatible with life or if the child is born it may suffer from such physical or mental abnormalities to be seriously handicapped; and

(g) women with pregnancy in humanitarian settings or disaster or emergency situations as may be declared by the Government.”

Aggrieved by High Court Order dated 15-07-2022, the Supreme Court vide Order dated 21-07-2022 permitted the Appellant to terminate her pregnancy and further, requested the Director of the All India Institute of Medical Sciences, Delhi to constitute a Medical Board to conclude if the foetus can be aborted without danger to the life of the Appellant. As per the Report of the said Board, the Appellant consented to termination of her pregnancy and as such, the procedure could be undertaken without any danger to her life. Hence, the termination of pregnancy was safely carried out.

Further, as the case involved a substantial question of law, the Apex Court transferred the Writ Petition filed before High Court to Supreme Court and decided to further consider the case.

The Apex Court passed the Judgment dated 29-09-2022 and made the following observations pertaining to the reliefs prayed before the High Court and interpretation of Rule 3B of the MTP Rules:

1) That most unmarried women face barriers of (a) insufficient infrastructural facilities, (b) lack of awareness, (c) social stigma, and (d) failure to ensure confidential care, etc in case of pregnancies out of marriage. These barriers deter single women from seeking safe and legal abortions and as a consequence, it negates the woman’s right to reproductive autonomy.

2) Further, there is also a fear of prosecution that is a major barrier to safe abortion process: (a) Sections 312 to 318 of the Indian Penal Code 1860 (IPC) criminalises abortion, but (b) MTP Act provides exceptions to such IPC provisions and provides that if termination of pregnancy is done as per the provisions of the MTP Act and Rules, the registered medical practitioner and the woman would not be punished. (c) Failing which, under IPC, fine may be imposed along with imprisonment which may range from 2 years to 10 years and in some case, life imprisonment. (d) However, unmarried women whose pregnancy arose out of consensual relationship are not covered by MTP Rules, hence, their abortion process is as such not allowed by MTP Act. Hence, in such cases, both women and registered medical practitioners have a fear of prosecution under IPC, which deters such women from seeking safe and legal abortion.

3) That over a period of time, law has evolved to give unmarried women same rights as that of married women in terms of adoption, succession, maternity benefits, etc. It signifies that married and unmarried women, both have equal autonomy to take decisions regarding their own welfare:

(a) Section 6 of the Hindu Succession Act 1956 as amended in 2005 (Devolution of interest in coparcenary property) states that a daughter, irrespective of her marital status, is a coparcener in her own right in the same manner as the son.

(b) Section 8 of the Hindu Adoptions and Maintenance Act 1956 (Capacity of a female Hindu to take in adoption) stipulates that any female Hindu regardless of her marital status has the capacity to take a son or daughter in adoption.

(c) Sections 7 and 8 of the Guardian and Wards Act 1890 allows for persons to apply for an order of guardianship without making any distinction between men or women, married or unmarried.

4) Thus, it is necessary that MTP Act and Rules also take into consideration the present-day social realities and not be restricted by societal norms of an age which has passed into the archives of history.

5) That the object of MTP Act, a beneficial legislation, is to enable women to access services of medical termination of pregnancies provided by a registered medical practitioner.

6) That the 2021 Amendment to MTP Act intended to extend benefit of medical termination of pregnancy to both married and unmarried women. There is a legal presumption that as MTP Act does not specify the term “married woman or her husband”, the Legislature intended to clarify the scope of Section 3 of MTP Act and bring pregnancies occurring outside the institution of marriage also within the protective umbrella of the law, as all women are entitled to the benefit of safe and legal abortions.

7) Hence, in terms of Section 3(2)(b) of MTP Act, at least two registered medical practitioners’ opinion, in good faith, is required that the continuation of the pregnancy of any woman who falls within the ambit of Rule 3B of MTP Rules would involve (i) a risk to her life; (ii) grave injury to her physical / mental health; or (iii) there is a substantial risk of the unborn child suffering from a serious abnormality, if born. Further, for interpreting “grave injury to her physical or mental health”, the pregnant woman’s actual or reasonably foreseeable environment have to be considered.

8) That although MTP Act brings into its purview ‘any woman’, but MTP Rules have not brought under its purview unmarried women whose pregnancy has occurred outside marriage. Thus, there is a need to give purposive interpretation to Rule 3B of MTP Rules.

9) That apart from the categories of woman enlisted under Rule 3B of MTP Rules such as minors, survivors of sexual assault, women with disabilities, etc, there are other categories of women as well. For instance, a woman who has suddenly been diagnosed with an acute or chronic or life-threatening disease, a woman who has lost her job and is no longer financially secure, etc. However, Rule 3B does not enumerate all the potential changes that a woman’s material circumstances may undergo.

10) That a right to reproductive autonomy is linked with the right to bodily autonomy, i.e. to take decisions about one’s own body and requires that every pregnant woman has the right to choose to undergo or not to undergo abortion without any consent or authorization from a third party.

11) That In K S Puttaswamy v. Union of India (2017) 10 SCC 1, a nine-Judge Bench of the Supreme Court (i) recognized the “right to privacy as a constitutionally protected right under Article 21 of the Constitution”. (ii) Further, a “woman’s freedom of choice whether to bear a child or abort her pregnancy are areas which fall in the realm of privacy.” (iii) Furthermore, “personal aspects of life such as family, marriage, procreation, and sexual orientation are all intrinsic to the dignity of the individual”

12) Thus, decisional autonomy is an integral part of right to privacy which safeguards and respects the intimate personal choices exercised by an individual over vital aspects of their body and life.

14) Therefore, the rights of reproductive autonomy, dignity, and privacy under Article 21 give an unmarried woman the right of choice on whether or not to bear a child, on a similar footing of a married woman.

Thus, the Supreme Court held that the decision to carry the pregnancy to its full term or terminate it, is firmly rooted in the right to decisional autonomy of the pregnant woman under Article 21 of the Constitution. Further, in view of the aforesaid purposive interpretation of Rule 3B, the Apex Court did not adjudicate upon its constitutional validity. The Supreme Court further directed the State to undertake active steps to help increase access to healthcare including reproductive healthcare and abortion.