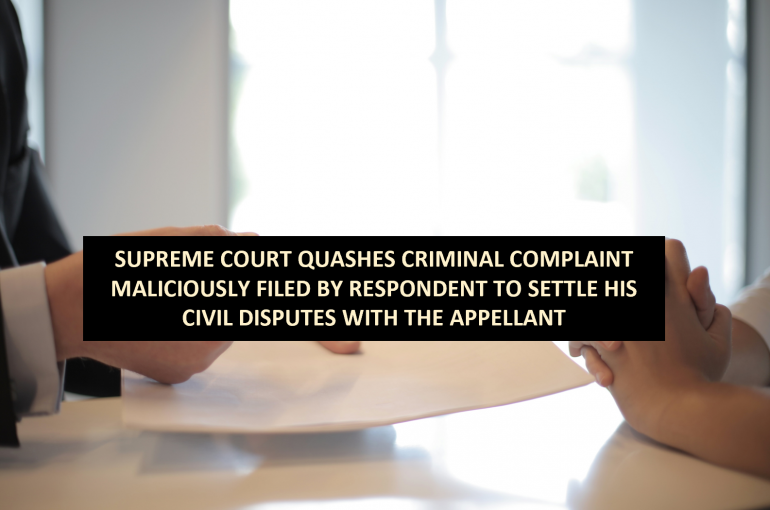 In a recent case of Ramesh Chandra Gupta vs State of U.P. SLP(Crl.) No(s).39 of 2022 and other connected matters, a two Judge Bench of the Supreme Court comprising of J. Ajay Rastogi and J. C.T. Ravikumar passed a Judgment dated 28-11-2022 and quashed a criminal case maliciously filed by the Respondent against the Appellants to settle his civil disputes with the Appellants.

In the present case, the dispute pertains to a property bearing House No. 189, Mohalla Madia, Kanpur Road, Jhansi (Property), which was purchased in the name of a minor named Shravan Kumar Gupta, vide Registered Sale Deed dated 04-05-1977.

Thereafter, it was purchased by the Appellant-Ramesh Chandra Gupta, who was the brother of Shravan Kumar Gupta, vide Registered Sale Deed dated 22-12-2018.

However, a settlement had already taken place in the Appellant’s family and as per the said settlement / Memorandum of Understanding (MOU) dated 19-08-2006, the aforesaid Property came in the share of the Appellant’s other brother named Vinod Kumar Gupta.

Based on such MOU, an Original Suit No. 91 of 2015 was filed by Vinod Kumar Gupta, seeking partition of the entire property of his brother, Shravan Kumar Gupta including a shop, but the other brothers were not made party to the said Suit.

Further, during the pendency of the said proceedings, the Registered Sale Deed dated 22-12-2018 was executed in favor of the Appellant-Ramesh Chandra Gupta and possession was handed over to him.

Thus, in the present case, the ownership of the aforesaid Property was being claimed by two persons, (i) the Appellant-Ramesh Chandra Gupta, on the strength of the Registered Sale Deed dated 22-12-2018 and (ii) the Appellant’s brother, Vinod Kumar Gupta, on the strength of the MOU dated 19-08-2006, which was executed much before the Sale Deed was registered in favor of the Complainant.

Hence, Atul Shukla filed a Criminal Complaint against Vinod Kumar Gupta and his family members including the Appellant-Ramesh Chandra Gupta and one, Rinky Sarna, under Section 156 (3) of the Code of Criminal Procedure 1973 (CrPC) (Police officer’s power to investigate cognizable case) alleging that he was forcibly thrown out of his house by the Appellants.

As a consequence of the aforesaid, a First Information Report (FIR) dated 02-04-2019 was registered before P.S. Navabad, District Jhansi as Case Crime No. 183 of 2019 (Criminal Complaint) under Sections 420 of the Indian Penal Code 1860 (IPC) (Cheating and dishonestly inducing delivery of property), 467 IPC (Forgery of valuable security, will, etc), 468 IPC (Forgery for purpose of cheating), 471 IPC (Using as genuine a forged document or electronic record), 504 IPC (Intentional insult with intent to provoke breach of the peace), 506 IPC (Punishment for criminal intimidation), 447 IPC (Punishment for criminal trespass) and 386 IPC (Extortion by putting a person in fear of death on grievous hurt).

Being aggrieved, the Accused filed a Special Leave Petition before the Hon’ble Supreme Court.

The Apex Court passed a Judgment dated 28-11-2022 and made the following observations:

1) That under Section 482 CrPC, the High Court has inherent powers to make such orders including quashing of proceedings, (i) to prevent abuse of the process of any court (ii) to secure the ends of justice, (iii) to ensure that a court proceeding does not become a weapon of harassment or persecution, (iv) to ensure that a proceeding is not maliciously instituted with an ulterior motive, i.e. to take vengeance on the accused, etc.

2) Thus, in the following types of cases, the High Court may exercise its inherent powers to pass an order under Section 482 CrPC:

i) If the allegations made in the complaint or FIR do not make out a prima facie case against the accused,

ii) If the allegations made in the complaint or FIR do not disclose commission of a cognizable offence justifying investigation by police officer, except if investigation happened in pursuance of Ld. Magistrate’s order under Section 155 (2) CrPC,

iii) If the evidence collected in support of the FIR or complaint do not disclose commission of any offence or do not make out a case against the accused,

iv) If the allegations made in the complaint or FIR disclose commission of only non-cognizable offence,

v) If the allegations made in the complaint or FIR are so absurd that no prudent person can ever reach a conclusion that there is sufficient ground for proceeding against the accused,

vi) If there is any specific provision given under CrPC or the concerned law thereby providing efficacious redress for the grievance of the aggrieved party,

vii) If a criminal proceeding or any proceeding has been instituted maliciously with a view to spite the accused due to private and personal grudges.

3) That in the present case, the complaint or the FIR did not disclose any act of the Appellants or their participation in the commission of the crime. The Complainant and his brothers were not in possession of Atul Shukla’s house and not in anyway involved in the alleged crime of forgery of documents, etc.

Thus, based on the aforesaid observations, the Supreme Court held that the High Court ought to have exercised its inherent powers under Section 482 CrPC for quashing the Criminal Complaint that was maliciously filed by Atul Shukla as a weapon to settle his civil disputes with the Appellants. As a result, the FIR and the Criminal Complaint filed against the Appellants were quashed.