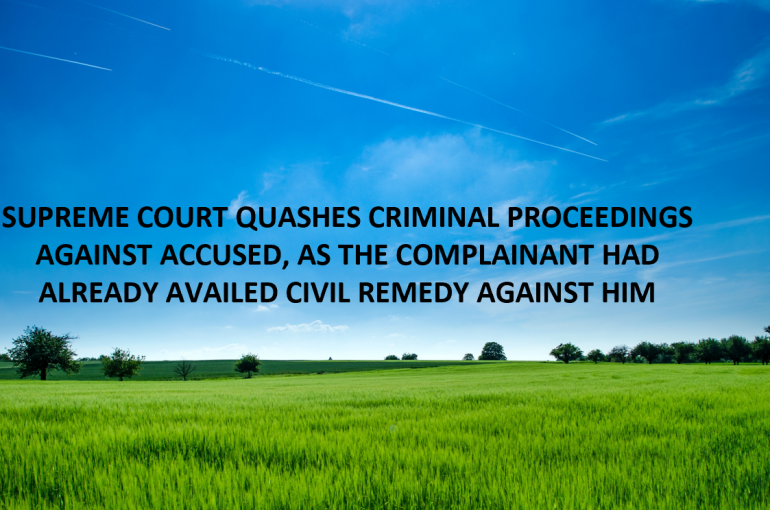 SUPREME COURT QUASHES CRIMINAL PROCEEDINGS AGAINST ACCUSED, AS THE COMPLAINANT HAD ALREADY AVAILED CIVIL REMEDY AGAINST HIM

A two-Judge Bench of the Supreme Court comprising Justice S. Abdul Nazeer and J B Pardiwala passed a Judgment dated 15.12.2022 in the case of R Nagender Yadav vs the State of Telangana, CRA 2290 of 2022 and quashed the criminal proceedings against the Accused in a cheating case after noticing that the Complainant had availed civil remedy against the Accused.

The Petitioner/Accused No.3 who had in his possession the originals, approached the Accused No.2 and offered to sell the Plot to him on the pretext that  that the same belonged to his close friend. The Accused No.2 interacted with the Accused No.1 who was in the USA. Allegedly, the Accused No. 3 forged the signature of the Respondent No.2 and executed a Sale Deed dated 29.12.2010 in favor of the co-Accused-1.

Aggrieved, the Respondent No. 2 filed a Complaint against the Appellant-Accused No.3 alleging commission of offences under Section 420 of the Indian Penal Code, 1860 (IPC) (Cheating and dishonestly inducing delivery of property), 120-B IPC (Punishment of criminal conspiracy), 468 (Forgery for purpose of cheating) and 471 (Using as a genuine a forged document or electronic record), in collusion with other co-Accused.

Later, the Respondent No. 2 also filed Original Suit No. 1343 of 2016 seeking cancellation of the Sale Deed dated 29.12.2010, before the Court of the District Judge, Ranga Reddy District at Kukatpally.

Aggrieved, the Appellant-Accused No. 3 filed a Petition under Section 482 of the Code of Criminal Procedure, 1973 (CrPC) in Criminal Petition No. 4687 of 2020  before the Telangana High Court, which refused to quash the Complaint, vide Order dated 01-06-2021, on the ground that the Accused No.3 failed to establish any ground for quashing the proceedings.

Aggrieved, the Appellant-Accused No. 3 filed an Appeal before the Supreme Court. The Apex Court passed a Judgment dated 15.12.2022 and made the following observations in this case:

Thus, based on the aforesaid grounds, the Supreme Court allowed the Appeal and set aside the High Court Order dated 01-06-2021 and further, quashed the Criminal Proceedings against the Accused.