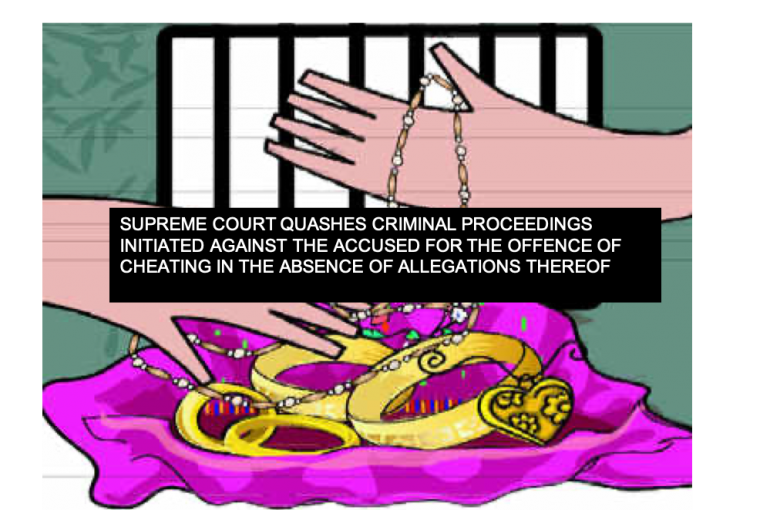 A Two Judge Bench of the Hon’ble Supreme Court of India comprising of Justice M.R. Shah and Justice B.V. Nagarathna in the matter of Rekha Jain v. The State of Karnataka and Anr. Criminal Appeal No. 749 of 2022 passed a Judgment dated May 10th, 2022 and allowed the present Appeal by quashing the Criminal Proceedings initiated against the Appellant-Accused- Rekha Jain for offence of Cheating under Section 420 of the Indian Penal Code (IPC).

One Mr. Pinku Maiti (Complainant), a gold smith running a jewellery making shop in Bengaluru had given 500 gms of gold jewellery on January 22nd, 2020 and 1.527 kgs of gold jewellery on February 2nd, 2020 for certain purpose to Kamalesh Mulchand Jain (Accused no. 1), another gold smith. However, the Accused no. 1 did not return the said jewellery to the Complainant. Hence the Complainant filed a Complaint before Halasur Gate Police Station, Bengaluru against the Accused no. 1 and his wife, Mrs. Rekha Jain (Accused no. 2). The said Complaint was registered as Crime No. 75/2020 for the offence of cheating under Section 420 IPC before I Additional C.M.M, Bengaluru.

Aggrieved by the High Court Judgment dated September 15th, 2020, the Accused filed an Appeal before the Supreme Court. The Apex Court vide Order dated January 8th ,2021 dismissed the Special Leave Petition in respect of the Accused No. 1 (reasons not mentioned thereof in the said Order). The Supreme Court has heard the Appeal in respect of the Accused No. 2 and made the following observations vide Judgment dated May 10th, 2022:

That the Counsel for the Appellant- Accused – Rekha Jain argued that there are no allegations stating that the Accused Rekha Jain induced the Complainant to deliver the gold jewellery. Further, the Complaint was made against Kamalesh Mulchand Jain for the alleged crime and there were no allegations against Rekha Jain, hence, it was argued that Accused No. 2 has not committed any offence under Section 420 IPC.

The Supreme Court observed as follows:

Hence, based on the aforesaid observations, the Supreme Court acquitted the Accused No. 2 and also observed that the High Court had committed a grave error in not quashing the Criminal Proceedings against Rekha Jain for the offence committed under Section 420 IPC.