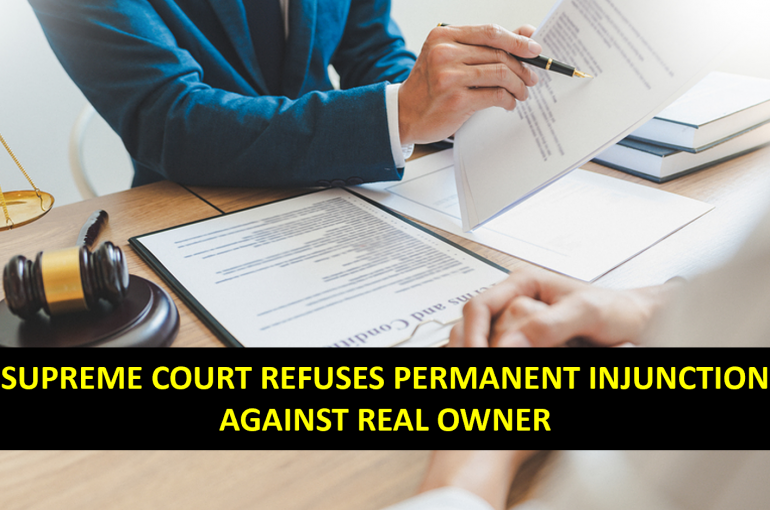 In a recent judgement given by the Supreme Court by the Division Bench of JUSTICE MR SHAH and JUSTICE BV NAGARATHNA on 03-03-2022 in the matter of PADHIYAR PRAHLADJI CHENAJI (DECEASED) VS MANIBEN JAGMALBHAI (DECEASED) CIVIL Appeal no 1382 of 2022, the Court held that an injunction cannot be issued against the real owner. The dispute in this case was with regard to Land measuring 6 acres 15 gunthas in village Mahadeviya, District Deesa. A sale deed was executed on 17_06-1975. In 1999, after 22yrs, the original Plaintiff went for the relief of cancellation of the registered sale deed, permanent injunction and declaratory relief. The Plaintiff claimed that the Defendant played fraud on her husband who was a drunkard to get the sale deed of entire 6 acres 15 gunthas while her husband had agreed to only sell 1 acre out of it.

Defendant then moved to the High Court. The Court held that relief of permanent injunction can be said to be substantive not consequential. Trail Court was justified in granting injunction as Plaintiff was found to be in possession of 5 acres 15 gunthas.

As far the appeal of the title of the land in question is concerned, the Plaintiff lost, as the Lower Court already declined the relief for the cancellation of the registered sales deed and the Plaintiff never appealed. Execution of the sales deed and payment of full scale consideration has been believed and accepted by all courts of law. So the crux question is whether the Plaintiff is entitled to a relief of permanent injunction against the true owner (i.e. the Defendant)?

Revenue records show Defendant’s name was mutated as the owner and the cultivation of the land in question right since the sale deed, and the Plaintiff who claims to be in possession of the land and cultivating the same, is deemed to have the knowledge of the said deed. It is to be noted that even in the registered sale deed, it was mentioned that the possession of the entire land in question has been handed over to the Defendant- purchaser. However in the case of a consequential relief, when the substantive relief of declaration is held to be barred by limitation, the said principle shall not be applicable.

It is further observed and held that, however, when the Defendant raises a genuine dispute with regard to title and when he raises a cloud over the title of the Plaintiff, then necessarily in those circumstances, Plaintiff cannot maintain a suit for injunction.

In view of the above the present Appeal succeeds. The judgement and decree passed by the Trial Court confirmed by the First Appellate Court and the High Court by the impugned judgement and order are hereby quashed and set aside. Consequently, the suit filed by the Plaintiff for permanent injunction against the Defendant stands dismissed.

The Court held that the Plaintiff cannot be said to be in the lawful possession of the suit land and the Plaintiff shall not be the entitled to any permanent injunction. The Supreme Court found all the Courts of Law erred in granting the perpetual injunction to Plaintiff and against the Defendant who is the true owner and reversed the findings of all three courts:- the Trial court-Decree, First Appellate Court and the High Court.

The Court held that applying the law laid down by this Court once the rights of the parties are adjudicated and the Defendant is held to be the true owner on the basis of the registered sale deed and on payment of full sale consideration, it can be said that due process of law has been followed and thereafter the Plaintiff is not entitled to any permanent injunction against the true owner.