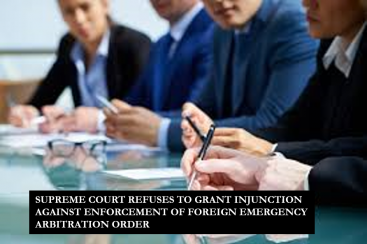 A Two Judge Bench of the #SupremeCourt comprising of J. RF Nariman and BR Gavai has in a matter of Amazon.com NV Investment Holdings LLC vs Future Retail Ltd and Others passed a #Judgment dated 06-08-2021 and decided upon the issue of #enforcement of #award of an #emergencyarbitrator.

In this case, the following three agreements were executed between the Parties herein:

i) Shareholders’ Agreement dated 12-08-2019 amongst the Biyani Group / Future Retail Ltd (FRL), i.e. Respondents No. 1 to 13 (FRL Agreement), whereby, Future Coupons Pvt. Ltd. (FCPL), a company that holds 9.82% shareholding in FRL, was given special rights with regard to FRL.

ii) Shareholders’ Agreement dated 22-08-2019 between Amazon.com NV Investment Holdings LLC (Amazon), FCPL, and Respondents No. 3 to 13, whereby, rights granted to FCPL under FRL Agreement were to be exercised for Amazon’s benefit (Amazon-Future Agreement).

The basic essence of all three Agreements was that Amazon’s investment in the retail assets of FRL would continue to vest in FRL and that without the consent of Amazon and FCPL, the said retail assets of FRL cannot be encumbered / transferred / sold / divested / disposed to prohibited entities with whom FRL, FCPL and the Biyanis could not deal, as listed out in the FRL Agreement and Amazon-Future Agreement. One of the prohibited entities was the Reliance Industries Group.

Aggrieved by the Disputed Transaction, Amazon initiated arbitration proceedings before the Singapore International Arbitration Centre (SIAC) on 05-10-2020 seeking emergency interim relief under SIAC Rules in the form of injunction against the Disputed Transaction. Mr. V.K. Rajah was appointed as the Emergency Arbitrator, who passed an Interim Award dated 25-10-2020, thereby passing an injunction and restraining the Respondents from taking any steps with regard to the Disputed Transaction and from alienating / transferring / disposing / encumbering FRL’s retail assets or shares, without the prior written consent of Amazon.

However, the Biyani Group went ahead with the Disputed Transaction claiming that the Interim Award dated 25-10-2020 passed by the Emergency Arbitrator is a nullity. Further, FRL filed a civil suit in the Delhi High Court and sought to interdict the arbitration proceedings and asked for interim relief restraining Amazon from taking any action in pursuance of the Interim Award dated 25-10-2020.

The Delhi High Court refused to grant interim injunction, as otherwise Amazon would suffer great irreparable loss. Aggrieved, the Biyani Group filed an Appeal against certain observations of the Delhi High Court Order, which is pending before the Division Bench of the High Court.

Meanwhile, Amazon filed an Application under Section 17 (2) of the Arbitration and Conciliation Act 1996 as amended thereof (Act) before the Delhi High Court seeking interim measure of protection and order of enforcement of the Interim Order of the Emergency Arbitrator.

The High Court passed an Order dated 02-02-2021 and passed a status-quo order thereby restraining the Biyani Group from going ahead with the Disputed Transaction. Later the High Court passed a detailed Judgment dated 18-03-2020 and held that the Emergency Arbitrator’s Interim Award dated 25-10-2020 is an order under Section 17(1) of the Arbitration Act and that the Respondents had raised a vague plea of nullity. Thus, the Interim Award is held as enforceable under the Act and the Respondents are held to be liable to pay penalty of Rs. 20 Lakhs for wilfully violating the terms of the Award.

The Supreme Court made the following observations in this case while passing the Final Judgment dated 06-08-2021:

1) That the following provisions clarify the position of arbitrator, arbitration proceedings and arbitral award under the Act:

Section 2 (a) “arbitration” means any arbitration whether or not administered by permanent arbitral institution;

Section 19 (2): Determination of rules of procedure – Subject to this Part, the parties are free to agree on the procedure to be followed by the arbitral tribunal in conducting its proceedings.

2) Hence, based on the aforesaid provisions, it is established that the parties are free to choose the arbitral institution, place of arbitration, and the rules governing the arbitration agreement and the proceedings, etc.

4) As per SIAC Rules, an emergency arbitrator has all the powers vested in the arbitral tribunal pursuant to SIAC Rules including the power to order interim relief, decide upon jurisdictional issues, etc. Hence, the Emergency Arbitrator is competent to pass the Interim Order dated 25-10-2020 and provide interim relief to the Claimant-Amazon.

6) As per Section 17 (2) of the Act- Subject to any orders passed in an appeal under section 37, any order issued by the arbitral tribunal under this section shall be deemed to be an order of the Court for all purposes and shall be enforceable under the Code of Civil Procedure,1908 (5 of 1908), in the same manner as if it were an order of the Court.

The intention behind enacting this provision was to provide for enforceability of such interim orders passed by an arbitral tribunal. Further, if a party has to challenge the interim order passed by the arbitral tribunal, an appeal has to be filed under Section 37 of the Act. But the Respondents had not filed any appeal against the Interim Order dated 25-10-2020 of the Emergency Arbitrator or the Delhi High Court Single Bench Judgment dated 18-03-2020 allowing enforcement of Interim Order of the Emergency Arbitrator.

Therefore, based on the aforesaid observations, the Apex Court held that the Emergency Arbitrator’s Interim Order dated 25-10-2020 is referable to orders made under Section 17(1) of the Act. Further, no appeal has been filed by the Respondents against the Delhi High Court Single Bench Judgment dated 18-03-2020 allowing enforcement of Interim Order of the Emergency Arbitrator. Thus, the Supreme Court vacated all its interim orders and also, set aside the Division Bench Order Judgment dated 08-02-2021. Hence, the stay on operation of the Single Bench of the High Court that refused to grant injunction against the enforcement of the Interim Arbitral Order was thereby lifted.