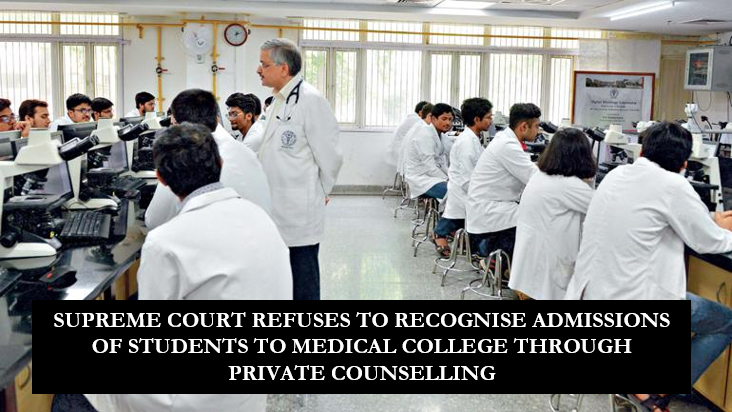 A Two Judge Bench of the Hon’ble #SupremeCourt of India comprising of Justices L. Nageswara Rao, B.R. Gavai and Krishna Murari passed an Order dated 17-08-2021 in the case of Abdul Ahad And Ors. v. Union Of India And Ors. Special Leave Petition (Civil) Nos. 31037­31038 of 2016 held that no relief to be given to #students who have been admitted to #PrivateCollege in contravention of the Centralized Admission Process.

In the present case, the Review Petitioners appeared in the National Eligibility­cum­Entrance Test (NEET), 2016 and qualified the same. they were admitted in 1st year Professional MBBS course for the Academic Session 2016­2017 in Glocal Medical College (College), which was affiliated to the Glocal University, a deemed University in Saharanpur, Uttar Pradesh. The Review Petitioners were not a party to the said Petitions. Vide Notification dated 31-08-2016 the State of Uttar Pradesh issued a direction for conducting counselling for admission to MBBS/BDS Course in all colleges/universities in the State of Uttar Pradesh, including private colleges and minority institutions and further prescribed the schedule and procedure for counselling, reservation, eligibility criteria for admission etc.

Vide another Notification dated 2-09-2016 the State of Uttar Pradesh directed that 50% of the sanctioned intake of private institutions shall be reserved for students who had domicile in the State of Uttar Pradesh. The said direction was issued in respect of all the private institutions (excluding minority institutions) after deducting the pool of 15% for All India Quota. The said Notification was challenged in the High Court of Allahabad (High Court) by way of Writ Petition No. 20575 of 2016 and heard with other connected writ petitions. The Division Bench of the High Court passed an Order dated 15-09-2016 which was challenged by the original writ petitioners before the Apex Court by way of Special Leave Petition (Civil) Nos. 31037­31038 of 2016.

On a perusal of the facts of the case, the Court observed that the original Writ Petitioners had conducted their private counselling despite Notifications issued by the State of Uttar Pradesh regarding common counselling. Also, the Medical Council of India (MCI) had issued a Discharge Letter/ Order dated 27-01-2017 to the College and directed to discharge 67 students admitted by it, whose names did not figure in the list supplied by the Director General of Medical Education & Training (DGME). The said Order dated 27-01-2017 was challenged in the Apex Court by way of Writ Petition (Civil) No. 411 of 2017. The same was disposed of vide Order dated 18-09-2017 and the Court observed as follows:

“The students who have been admitted in pursuance of the letter of permission granted for the year 2016­2017 shall be permitted to continue their studies.”

Liberty was given to approach the Hon’ble Supreme Court of India and the Review Petitioners therefore filed Writ Petition (Civil) No.1287 of 2019 challenging the Discharge Letter/Order but the same was dismissed. The Review Petitioners thereafter filed Intervening Application and Special Leave Petition (Civil) Nos. 31037­31038 of 2016 and vide Order dated 20-07-2020 the same was also dismissed.

Seeking review of the Order dated 20-07-2020, the Review Petitioners filed Review Petitions in the Apex Court. After taking into consideration the arguments advanced by the Parties to the dispute and after placing reliance on the case of Modern Dental College and Research Centre and others v. State of Madhya Pradesh and others 1 (2016) 7 SCC 353 the Bench observed that the private counselling by the College was conducted contrary to the Notification issued by the State of Uttar Pradesh. In this regard the Court made the following observation:

“28. Though we have all the sympathies with the students, we will not be in a position to do anything to protect the admissions, which were done in a patently illegal manner.”

The Supreme Court while dismissing the Review Petitions held that the Notification issued by the State of Uttar Pradesh clearly provided that the admissions were to be done only through the centralized admission process and that no sympathies can be shown to such students who have entered through backdoor.