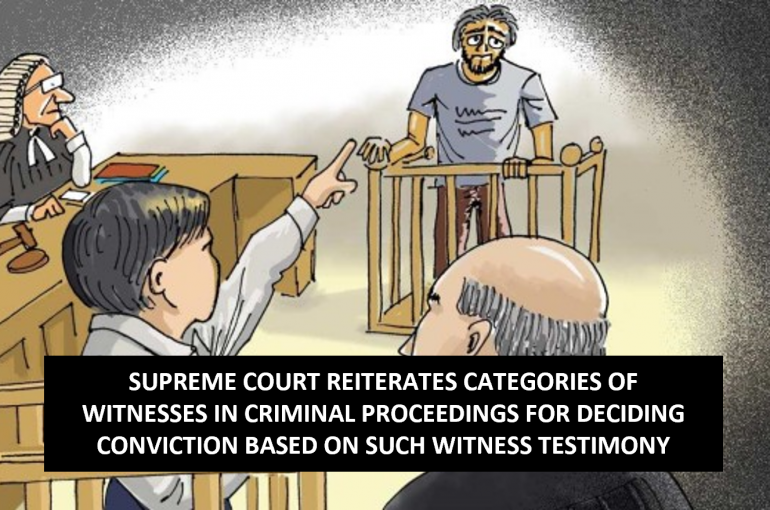 A two-Judge Bench of the Supreme Court comprising of Justice BR Gavai and Justice Hima Kohli has in a recent case of Mahendra Singh and Others vs State of Madhya Pradesh Criminal Appeal No. 764 of 2021 passed a Judgment dated 03-06-2022 and reiterated various categories of witnesses in criminal proceedings based on which the courts may decide whether to convict the accused or to acquit them based on the witness testimonies / evidence.

In this case, a First Information Report (FIR) was registered by one, Amol Singh at Nateran Police Station, Madhya Pradesh (MP) against the Appellant-Accused, Mahendra Singh, Pritam Singh and Shambhu Singh for physically assaulting him and his brother, Bhagat Singh (Deceased) and causing such severe bodily injury to the Deceased that it led to his death. The Complainant, Amol Singh alleged that he witnessed the incident and that the Accused had assaulted them on account of previous enmity.

Thereafter, a Chargesheet was filed against the Accused in the Court of Judicial Magistrate First Class, Ganj Basoda, who then committed the case to Learned Sessions Court, Ganj Basoda, Vidisha District, MP (Trial Court). The Trial Court vide Judgment dated 18-04-2000 convicted Appellant-Accused, Mahendra Singh, Pritam Singh, Santosh, Shambhu Singh and Lakhan Singh for the offences of Sections 148 (Rioting, armed with deadly weapon) and 302 (Punishment for murder) of the Indian Penal Code 1860 (IPC) read with Section 149 of IPC (Every member of unlawful assembly guilty of offence committed in prosecution of common object) and thereby, sentenced them to one year of rigorous imprisonment under Section 148 IPC, life imprisonment and fine of Rs. 5000/- under Sections 302 and 149 IPC each.

Aggrieved by the Trial Court Judgment dated 18-04-2000, the Accused filed an Appeal before the High Court of MP at Gwalior, which was dismissed vide Judgment dated 06-08-2019.

Aggrieved by the High Court Judgment dated 06-08-2019, the Accused filed an Appeal before the Supreme Court. The Apex Court passed a Judgment dated 03-06-2022 and made the following observations in this case:

1) That the main contention of the Appellant-Accused persons was that their conviction was entirely based on the testimony of the Deceased’s brother, Amol Singh. However, the Supreme Court in various cases has time and again observed that the quality and not quantity of evidence is necessary for proving or disproving a fact. Further, the oral testimony may be categorised into the following three types:

(a) wholly reliable- in such cases, courts may convict or acquit based on the testimony of a single witness itself.

(b) wholly unreliable- in such cases, courts may decide accordingly whether to acquit or not.

(c) neither wholly reliable nor wholly unreliable- the court has to be cautious and has to look for corroboration in material particulars by reliable testimony, i.e. either direct or circumstantial evidence.

2) Accordingly, the High Court found the testimony of the Deceased’s brother, Amol Singh in the third category and only after corroborating such testimony with the post-mortem report, the Court convicted the Accused.

3) That in this case the Accused (Prosecution Witness –PW or a witness called upon by the Prosecution or on behalf of the victim side) had deposed in the Trial Court stating that it was one, Mobat Singh (Defense Witness- DW or a witness summoned on the request of the Accused / defending party) who had informed Amol Singh that his brother’s dead body was lying on the road. Further, the testimony of the Accused-PW was fully corroborated by the evidence of Mobat Singh-DW.

4) That it is settled law that in criminal proceedings, the same treatment is ought to be given to a defense witness (DW) as is given to a prosecution witness (PW). Hence, juxtaposing the evidence / testimonies of both PW and DW, it is clear that Amol Singh could not have witnessed his brother’s death. Therefore, Amol Singh’s testimony would fall under the second category i.e. wholly unreliable witness. Hence, conviction could not be based upon his sole testimony.

Thus, based on the aforesaid grounds, the Apex Court held that the Prosecution in this case could not prove the case beyond reasonable doubt and hence, the Accused persons are entitled to be given the benefit of doubt. Accordingly, the Accused were acquitted in this case. Therefore, the Appeal was allowed and as a result, the High Court and the Trial Court Judgments dated 18-04-2000 and 06-08-2019 were set aside.