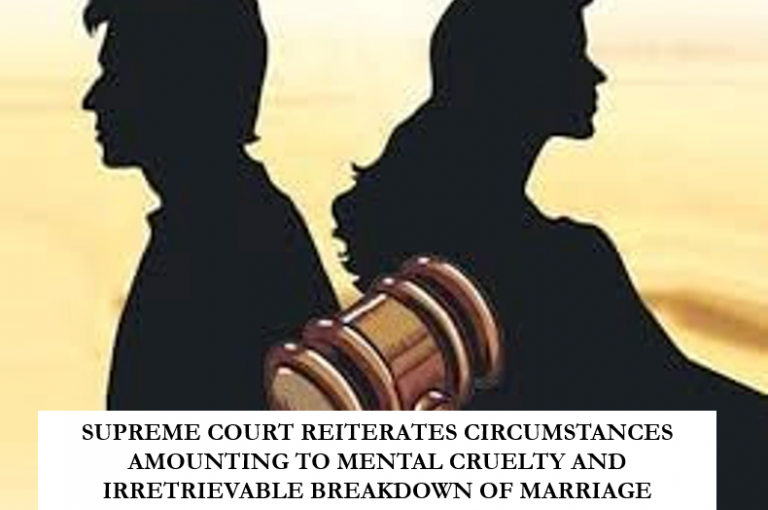 The #SupremeCourt has in a recent case of Sivasankaran Vs Santhimeenal passed a Judgment dated 13-09-2021 and reiterated the #circumstances amounting to #mentalcruelty and irretrievable / complete #breakdown of #marriage in #divorce cases.

In this case, Mr. Sivasankaran, the Appellant-Husband and Mrs. Santhimeenal, the Respondent-Wife, solemnised their marriage as per the Hindu Customs on 07-02-2002 (Marriage). However, as per the Appellant-Husband, the Respondent-Wife did not consent to their Marriage and thus, left the marriage hall that night and went to Pudukkottai, Tamil Nadu. Further, her parents and relatives tried to persuade her to come back and live with the Appellant, but it was not fruitful. The Marriage did not work from the very inception and the Marriage was never consummated. Hence, the Appellant-Husband issued a Notice dated 25-02-2002 seeking divorce under the ground of cruelty under Section 13 (1) (i-a) of the Hindu Marriage Act 1955 (the Act).

(1) Any marriage solemnized, whether before or after the commencement of this Act, may, on a petition presented by either the husband or the wife, be dissolved by a decree of divorce on the ground that the other party—

(ia) has, after the solemnization of the marriage, treated the petitioner with cruelty

Thereafter, the Appellant filed a Petition for Divorce under Section 13 (1) (i-a) of the Act before the District Court. After 5 years of trial proceedings, a Decree for Divorce was granted on 17-03-2008 on the ground of irretrievable breakdown of Marriage.

Immediately after the Divorce Decree was obtained, 6 days later, the Appellant got married a second time on 23-03-2008.

Thereafter, the Respondent-Wife filed an Appeal before the Addl. District Judge, Pudukkottai, whereby, the Court set aside the Divorce Decree.

Aggrieved, the Appellant filed an Appeal before the Madras High Court, which restored the Divorce Decree, vide Judgment dated 14-09-2018.

All in all, around 15 years had passed in litigation and the disputes between the Parties still continued.

The Respondent thereafter filed a Review Petition before the Supreme Court on the ground that it was not within the jurisdiction of the High Court or the District Court to grant a Decree of Divorce on the ground of irretrievable breakdown of Marriage. The Apex Court allowed the Review Petition vide Order dated 25-02-2019.

Aggrieved, the Appellant filed Civil Appeal before the Supreme Court.

2) That it has been reiterated in various other Supreme Court cases that (a) while exercising powers under Article 142 of the Constitution to dissolve a marriage on the ground of irretrievable breakdown of marriage, mutual consent of the parties is not required and (b) the Court should only be convinced that it is impossible to save the marriage and that the marriage is broken beyond repair.

4) The Respondent-Wife’s main issue was with respect to the status of the second marriage of the Appellant. Despite the fact that both Appellant and Respondent have not cohabited in the last two decades, the Respondent-Wife was not willing to concede to the Divorce Decree.

6) Hence, the Apex Court held that these continuing acts of the Respondent-Wife amount to mental cruelty on the ground that there is no marital unity and that the Marriage has disintegrated.

Thus, the Supreme Court granted a Decree of Divorce on the grounds of irretrievable breakdown of Marriage and mental cruelty and thereby, dissolved the said Marriage.