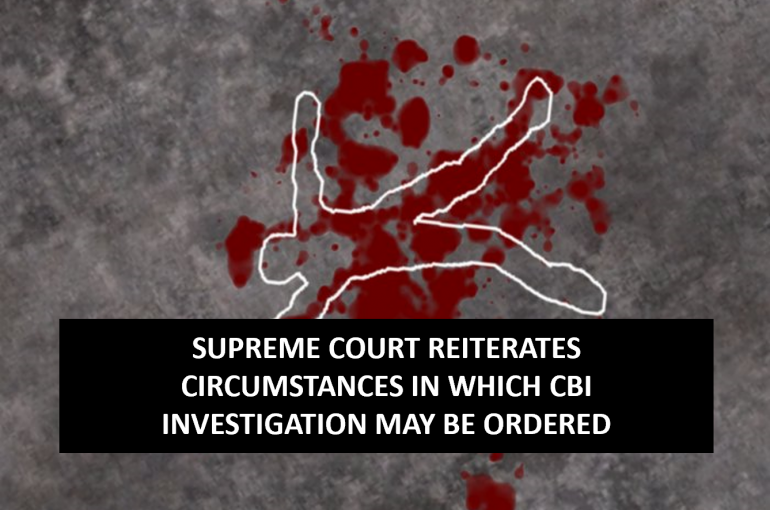 SUPREME COURT REITERATES CIRCUMSTANCES IN WHICH CBI INVESTIGATION MAY BE ORDERED

A two-Judge Bench of the Supreme Court of India comprising of J. AM Khanwilkar and J. JB Pardiwala has in a recent case of Himanshu Kumar and Others Vs State of Chhattisgarh and Others, Writ Petition (Criminal) No. 103 of 2009 passed a Judgment dated 14-07-2022 and reiterated the circumstances in which the Apex Court and the High Courts may exercise their extraordinary powers to direct the Central Bureau of Investigation (CBI) in an appropriate case.

This case refers to the alleged brutal massacre of the tribal people residing in the Villages of Gachhanpalli, Gompad and Belpocha in the District of Dantewada, State of Chhattisgarh by the Chhattisgarh Police, Special Police Officers (SPOs), the Activists of Salwa Judum, a self-appointed Group sponsored by the Chhattisgarh Government and the Paramilitary Forces consisting of the Central Reserve Police Force (CRPF) and the  Commando Battalion for Resolute Action (CoBRA) (Respondents) on 17-09-2009 and 01-10-2009.

In this case, the tribals had lodged various complaints with the Police in 2009-10 regarding the massacre, whereby, it was alleged that the Security Forces had brutally murdered tribals including women and infants and their money and properties were looted. But the police had not taken any action and had not arrested anybody.

Hence, a Writ Petition was filed under Article 32 of the Constitution of India 1950 before the Supreme Court by one, Mr. Himanshu Kumar, who runs an NGO in Dantewada for the welfare and development of the tribals residing in Bastar region. As per the Petitioner, the tribals are constantly under fear of being killed by the Special Forces and with a view to help them and to seek justice for them, he has filed a Writ of Mandamus before the Apex Court seeking CBI investigation into the alleged tribal massacre and payment of compensation to victims and their families for the losses suffered on account of unlawful activities of the Respondents. The Petitioner has sought for CBI investigation as they feel that the Police Forces and the State of Chhattisgarh were themselves involved in the brutal tribal massacre.

The Apex Court passed a Judgment dated 14-07-2022 and made the following observations in this case:

1) That the Constitutional Courts have extraordinary powers under Article 32 and Article 226 of the Constitution to handover the investigation to an independent agency like the CBI, after the filing of the charge sheet, only in the following circumstances:

a) If the investigation by the police authorities is not in a proper direction.

b) If high police officials are involved in the alleged crime.

d) If it becomes necessary to provide credibility and instil public confidence in investigations.

e) Where the incident may have national and international ramifications.

f) Where such an order may be necessary for doing complete justice and enforcing the fundamental rights.

2) But in this case, all the FIRs were investigated by the concerned investigating agencies and charge sheets were also filed in different Courts of the State of Chhattisgarh for the offences of murder, dacoity, etc under the Indian Penal Code 1860 (IPC).

3) As per the said chargesheets, the finding was that the tribals were killed by the Naxalites (Maoists). However, the accused seem to be absconding and hence, the concerned Trial Court is supposed to take appropriate steps in this regard for their arrest, etc.

4) Further, with respect to the allegations made by the Union of India that the Petitioners are guilty of levelling false charges against the security personnel and providing false evidence and also guilty of perjury as they have given false statements in their affidavit of evidence, etc, the Supreme Court observed that:

a) Inquiry/contempt proceedings should be initiated by the court in exceptional circumstances where the court is of the opinion that perjury has been committed by a party deliberately to have some beneficial order from the court.

5) In this case, the tribals had given false information to the Police that the massacre happened because of the security personnel, when in fact, the Naxals were guilty of causing such massacre. Hence, the Apex Court left it to the State of Chhattisgarh / CBI to take appropriate steps in that regard.