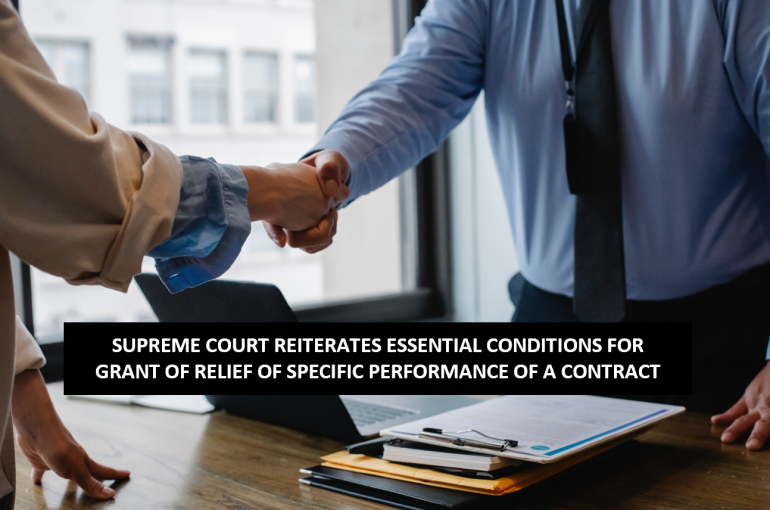 The Hon’ble Supreme Court of India comprising of a three Judge Bench of the then Chief Justice of India, N.V. Ramana, Justice Krishna Murari and Justice Hima Kohli passed a Judgment dated 25-08-2022 in the matter of Smt. Katta Sujatha Reddy & Anr. vs Siddamsetty Infra Projects Pvt. Ltd.& Ors. And other connected matters and reiterated the essential ingredients of Section 12 of the Specific Relief Act 1963 (Specific performance of part of contract) for deciding whether to allow the discretionary relief of specific performance.

Thereafter, the Plaintiff-Purchaser sent two Notices to the Defendant-Sellers seeking specific performance of the Agreements, the first Notice dated 08-02-2000 sent on 31-03-2000 and the second Notice sent on 06-07-2002. When the same was not complied with, the Plaintiff-Purchaser filed a Suit for Specific Performance being OS No. 88 of 2002 before the Additional District Judge, Ranga Reddy District, LB Nagar, Hyderabad (Trial Court) against the Defendant-Sellers on 09-08-2002.

The Trial Court further observed that in this case, (i) the Plaintiff-Purchaser did not make full payment of sale consideration to the Defendants within agreed timelines, (ii) despite such delayed payments, the Defendant did not send any notice to the Plaintiff seeking payment of the balance amount, (iii) the Defendant-Sellers also did not obtain and/or furnish the necessary certificates pertaining to the Land from the concerned Government departments such as income tax exemption certificate and agriculture certificate, as required to be done under the Agreements. Hence, it is established that both the Plaintiff and the Defendants did not treat time as the essence of the contract in this case.

Thus, the Trial Court held that although the Defendant has not complied with its contractual obligations under the Agreements for Sale, but the Plaintiff itself has also not proved its willingness to pay the balance amount to the Defendants. Thus, as the Plaintiff itself has approached the Court with unclean hands, it would not be entitled to the relief it has sought in the Suit, i.e. specific performance of the Agreements by the Defendants.

Aggrieved by the High Court Judgment, both the Plaintiff-Purchaser and the Defendant-Sellers filed an Appeal before the Supreme Court that passed a Judgment dated 25-08-2022 and observed as follows:

1) The Suit is barred by limitation-

i) That as per Article 54 of the Limitation Act 1963, a suit for specific performance can be filed within three years of the date fixed for the performance.

ii) In the present case, the Plaintiff-Purchaser was obliged to pay the balance consideration within 3 months of the date of the Agreements i.e. on or before 26-06-1997 / 27-06-1997, i.e. the dates fixed for the performance.

iii) But the Plaintiff-Purchaser failed to pay the balance consideration within agreed timelines.

iv) As agreed by the Parties in Clause 55 of the Agreements, in case either Party fails to comply with any specific timelines, the Agreements are voidable at the option of the other Party.

v) Hence, in such case of non-performance within the stipulated timelines, a suit could be filed within three years from the dates fixed for the performance, i.e. before June 2000.

vi) But in this case, although it was the Plaintiff-Purchaser who failed to pay the balance consideration within the agreed timelines, a Suit was filed before the Trial Court by the Plaintiff itself seeking specific performance on the part of the Defendant-Sellers.

vii) In this regard, the Supreme Court held that when a condition of a contract is breached and the consequences ensue for that breach, a party cannot claim equity to escape such consequences.

viii) Further, as the Suit was filed by the Plaintiff-Purchaser on 09-08-2002, i.e. after the Limitation period expired, thus, the Apex Court held that the Suit was barred by limitation.

2) Time is the essence of the Agreements for Sale-

(i) The Supreme Court observed that, although there is no presumption that time is the essence of a contract in case of sale of immovable property, but it may still be inferred by the Court that the contractual obligations are to be performed in a reasonable time, based on the surrounding circumstances such as object of making the contract, etc.

(ii) In the present case, (a) the Agreements provided for forfeiture of the advance amount by the Defendant-Sellers in case of non-payment of balance consideration by the Plaintiff-Purchaser within three months of the date of the said Agreements, (b) Further, as per Clause 55 of the Agreements, it was agreed by the Parties that in case either Party fails to comply with any specific timelines, the Agreements are voidable at the option of the other Party.

(iii) Thus, it is established that time is the essence of the Agreements for Sale in the present case.

3) Plaintiff is not entitled to the relief of specific performance-

i) That as per Section 14 (1) (a) (Contracts not specifically enforceable) of the Specific Relief Act 1963 (1963 Act), if “a contract for the non-performance of which compensation is an adequate relief”, such contract cannot be specifically enforced. Thus, one of the major considerations for grant of specific performance under the 1963 Act was the adequacy of damages.

ii) However, the said provision was completely done away with, in the Specific Relief (Amendment) Act, 2018, in order to provide better compensation to the aggrieved party in the form of specific performance and to boost adherence to the sanctity of contracts.

iii) But the Apex Court held that (a) as the 2018 Amendment is not merely procedural in nature, (b) rather, it has substantive principles built into its working and (c) it has also created new rights and obligations or taken away vested rights, in respect of contracting parties, which did not exist prior to the said Amendment, hence, the 2018 Amendment would have prospective effect and thus, would not apply to those transactions that happened before it came into force, i.e. before 01-10-2018.

iv) Thus, the 2018 Amendment would not be applicable to the present set of facts which took place around 2000s, i.e. long before the Amendment came into force.

v) Thus, applying the earlier law laid down under Section 14 (1) (a) of the 1963 Act, grant of specific performance relief was discretionary and such relief could be granted only if (a) the plaintiff pays or has paid the whole consideration amount under the agreement to the defendant and (b) the plaintiff relinquishes all claims to the performance of the other part of the contract which the defaulting party / defendant is incapable to perform. Further, upon satisfying both such preconditions, discretionary relief of specific performance is ordinarily granted unless there is delay or laches or any other disability on the part of the other party.

vi) But in the present case, the Plaintiff itself has breached essential conditions of the Agreements, which disentitles them from claiming specific performance by the Defendants.

Thus, based on the aforesaid observations, the Supreme Court held that the Plaintiff’s claim is barred by delay, laches and limitation and hence, relief of specific performance under Section 12 of the 1963 Act cannot be granted to the Plaintiff. Thus, the Apex Court directed the Defendants to repay the advance amount with interest @ 7.5% p.a. from the date of payment till the entire amount is paid back. As a result, the Appeal was allowed.