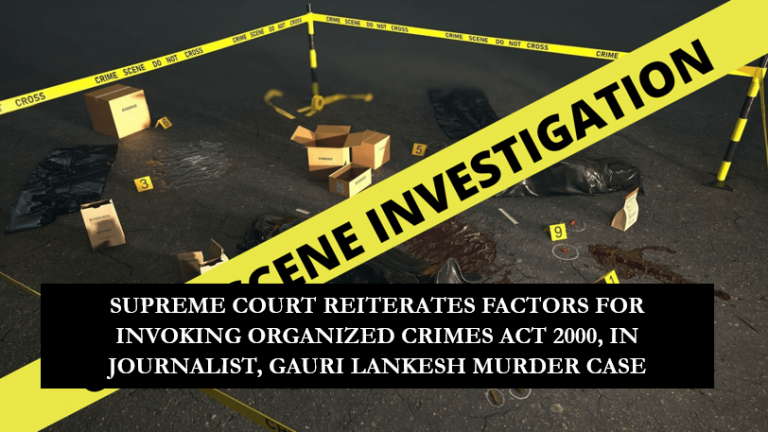 A three-Judge Bench of the #SupremeCourt recently passed a Judgment dated 21-10-2021 in the #Journalist, #GauriLankesh #murder case titled as, Kavitha Lankesh vs State of Karnataka and Others, and reiterated the factors to be considered by a competent Police Authority, while giving #priorapproval to an Investigating Officer to invoke the provisions pertaining to organized crime under the Karnataka Control of #OrganisedCrimes Act 2000 (Organised Crimes Act).

In this case, a leading Journalist, Late Gauri Lankesh was killed by unknown assailants near her house in Rajarajeshwari Nagar, Bengaluru on 05-09-2017. Her sister, Kavitha Lankesh lodged a complaint with the Rajarajeshwari Nagar Police Station (Complaint). The said Complaint was registered as FIR No. 221/2017 dated 05-09-2017 against one, Mohan Nayak N. (Accused) for offences punishable under Section 302 of the Indian Penal Code 1860 (IPC) (Punishment for murder) and Section 25 of the Arms Act, 1959 (Punishment for certain offences) (Arms Act). The investigation was later handed over to the Special Investigating Team (SIT) on 06-09-2017.

A preliminary chargesheet was filed against the Accused on 29-05-2018. The matter came up before the City Civil and Sessions Judge in CC No.14578 of 2018. The Accused was arrested on 18-07-2018 for the said crime. During the investigation, it was found that the other accused persons in Special CC No.872 of 2018 were also involved in organizing the crime as a syndicate, for which punishment under Section 3 of the Organised Crimes Act (Punishment for organized crime) would be attracted.

Section 24. Cognizance of and investigation into an offence:

(1) Notwithstanding anything contained in the Code,

After completion of investigation, the Additional Director General of Police and the Police Commissioner accorded sanction under Section 24 (2) of the Organised Crimes Act.

Section 24. Cognizance of and investigation into an offence:

In the Final Police Report dated 23-11-2018 filed before the Special Court, Bengaluru, further charges were invoked under the Arms Act and the Organised Crimes Act. Additional chargesheet was also filed before the Principal City Civil and Sessions Judge in Special CC No.872 of 2018 against various accused persons including Mohan Nayak N. The Court took cognizance on 17-12-2018.

The High Court of Karnataka observed that in order to allow prior approval by competent Authority to invoke offence related to organised crime, the unlawful activity should have been a continuing one, as per Section 2 (1) (d) of the Organised Crimes Act, i.e. (a) at least more than one charge-sheet should have been filed before a competent court within the preceding ten years and (b) that court should have taken cognizance of such offence.

Sections 2 (1) (d) and (e) of the Organised Crimes Act are reproduced below:

Section 2 (1) (d) “Continuing unlawful activity” means an activity prohibited by law for the time being in force, which is a cognizable offence punishable with imprisonment of three years or more, undertaken either singly or jointly, as a member of an organized crime syndicate or on behalf of such syndicate in respect of which more than one charge-sheet have been filed before a competent Court within the preceding period of ten years and that Court has taken cognizance of such offence.

Section 2 (1) (e) “Organized crime” means any continuing unlawful activity by an individual, singly or jointly, either as a member of an organized crime syndicate or on behalf of such syndicate, by use of violence or threat of violence or intimidation or coercion, or other unlawful means, with the objective of gaining pecuniary benefits, or gaining undue economic or other advantage for himself or any other person or promoting insurgency.

Thus, the High Court of Karnataka passed a Judgment dated 22-04-2021 and partly allowed the Writ Petition, thereby, quashing the prior approval given by the competent Authority to invoke offences under Section 3 of the Organised Crimes Act.

Being aggrieved, the Appellant, Kavitha Lankesh filed an Appeal before the Supreme Court against the High Court Judgment dated 22-04-2021. The Apex Court made the following observations:

1) That Section 24 (1) (a) of the Organised Crimes Act requires a police officer to record information regarding commission of organised crime upon obtaining prior approval of a police officer not below the rank of the Deputy Inspector General of Police. The essence of this provision is about recording of offence of organised crime and not about recording crime against an offender.

2) Accordingly, in this case, the prior approval accorded to the Investigating Officer was not for registering crime against individual offenders, but for recording information about commission of offence of organized crime under the Organised Crimes Act.

3) Further, the roles of the individual assailants and their identities can be unravelled only after FIR is registered and the investigation is commenced. Thereafter, only upon conducting the investigation, details of their specific roles, identities, etc can be referred to in the chargesheet to be filed before the competent court.

4) Furthermore, the requirement of at least two charge sheets is not required in case the accused has acted as an abettor or facilitator of the organised crime syndicate.

Thus, the Apex Court held that the competent Authority had rightly accorded prior approval to the Investigating Officer to invoke Section 3 of the Organised Crimes Act, after being satisfied that the material on record reveals credible information about commission of organized crime by an organized crime syndicate. As a result, the Supreme Court set aside the High Court Judgment dated 22-04-2021.