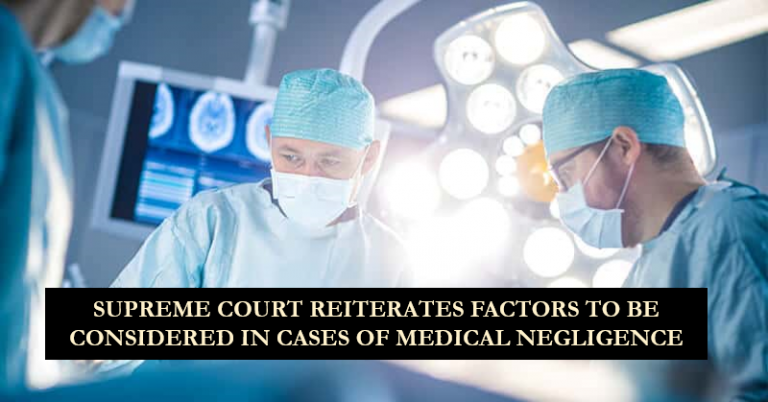 The Two-Judge Bench of the #SupremeCourt has in a recent case of Dr. Harish Kumar Khurana vs Joginder Singh & Ors. passed a Judgment dated 07-09-2021, wherein, the Apex Court reiterated the #factors to be considered in #medicalnegligence cases.

In this case, Mrs. Jasbeer Kaur (Patient) was diagnosed with kidney stone in her right kidney at the Appellant Hospital on 08-10-1996. Dr. Rajeev Kumar Majumdar advised the Patient to undergo surgery. She came back to the Hospital again on 03-12-1996, when she was diagnosed with kidney stone in her left kidney as well and was further informed that the right kidney was severely damaged. So, the Patient was again advised to undergo surgery. The Patient then got admitted in the Hospital on 06-12-1996. Dr. Harish Kumar Khurana informed the Patient and her family members that surgery would be done on the kidneys one at a time due to severity of damage. Hence, left kidney would be operated first, as the chances of complete removal of right kidney were high. The Hospital obtained an informed consent for a ‘high risk surgery’ from the Patient and her husband on 09-12-1996. Dr. Harish Kumar Khurana and Dr. Rajeev Kumar Majumdar successfully operated on the left kidney, after which the Patient’s condition improved by 12-12-1996, as per the Hospital Authorities. Hence, the surgery for right kidney was scheduled for 16-12-1996. However, as soon as the Patient was taken inside the Operation Theatre and was administered certain injections, her condition deteriorated and she went into cardiac respiratory arrest. As per the Hospital Authorities, she was later put on automatic ventilator support and shifted to critical care unit, but the Patient passed away on 23-12-1996.

Thereafter, the Appellant-Hospital raised issues regarding payment of balance medical bills and later, filed a Suit for Recovery on 13-08-1997 against the Patient’s husband. But the Patient’s husband led a demonstration at the Hospital along with his co-workers on 06-02-1997 and filed a criminal complaint against the Appellant Hospital on 27-09-1997.

Thereafter, the Patient’s husband and children filed a Complaint / Petition before the National Consumer Dispute Redressal Commission (NCDRC) against the Appellant Hospital Authorities on 06-12-1997 in the matter of OP/289/1997 Joginder Singh & Ors. vs Dr. Rajeev Kumar Majumdar and Others, thereby, alleging medical negligence and claiming compensation. The Complainants alleged that the Hospital Doctors were liable for medical negligence as they did not pay heed to her poor tolerance to anaesthesia. Moreover, based on the Doctrine of Res Ipsa Loquitor, which states that a court can infer negligence from the very nature of the accident or injury, in case there is no direct evidence to show how the defendant behaved, the Doctors may be held liable for medical negligence.

The matter was allowed by NCDRC and disposed of by Final Order dated 13-08-2009. The NCDRC held the Appellant Hospital Authorities guilty of medical negligence and directed payment of Rs. 17,00,000/­- with interest.

The Apex Court made the following observations in this case:

1) That Principle of Res Ipsa Loquitor can be applied only when the negligence is shown to be glaring and very obvious. For instance, in a situation where a patient has been treated for typhoid although his tests in that regard were negative, rather the test for malaria came positive. In such cases, the Doctrine of Res Ipsa Loquitor may be applied.

2) Otherwise, generally, in cases of medical negligence, mere general standard of assessment is not sufficient. In fact, the complainant has to establish negligence on the part of the doctor based on medical evidence and expert medical opinion.

3) That in this case, the Appellant Hospital Doctors have established the following facts:

i) In the first operation, i.e. on left kidney, there were no complications related to anaesthesia or any other side effects.

iii) Also, there was no proof to show shortcoming in medical equipments or infrastructure.

iv) That the Doctors had given detailed information about both the surgeries beforehand to the Patient and her husband and obtained their prior written informed consent. Thus, it is established that the Respondents had given their informed consent for the high-risk surgeries.

v) That the procedure followed for the second surgery was as per the standard medical procedure, as shown in the medical evidence put forth by the Doctors. In fact, the same procedure was initially followed for the first surgery as well, when the operation was completed successfully.

vi) That the Respondents have not shown any medical evidence to establish that the cardiac arrest or the deteriorating medical condition had occurred due to the medical negligence of the Appellant Doctors.

4) Hence, the negligence is not shown to be glaring and obvious in this case.

Thus, the Supreme Court held that the NCDRC Final Order dated 13-08-2009 was not based on medical evidence and expert opinion, rather was based on mere perception that the Doctors should not have performed the second surgery owing to her poor tolerance to anaesthesia. Hence, there was no medical evidence at all to show medical negligence on the part of the Appellant Doctors. Therefore, the Apex Court allowed the Appeal made by the Doctors and thereby, set aside the Final Order dated 13-08-2009 of the NCDRC.