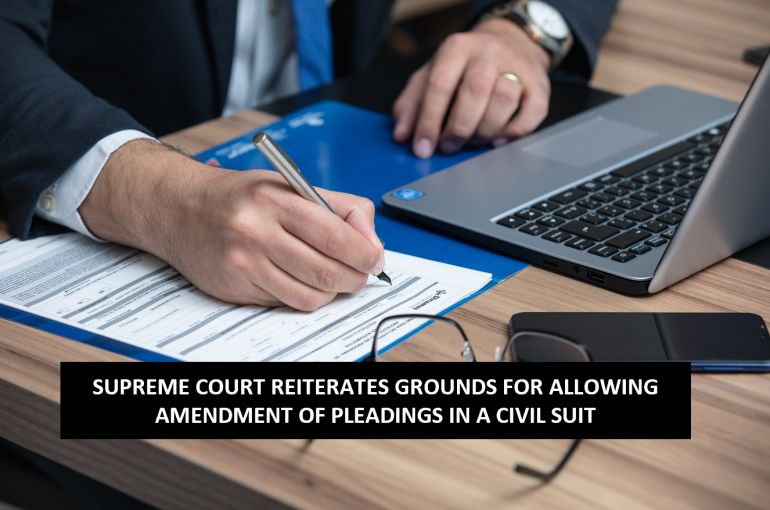 Recently, a two Judge Bench of the Supreme Court comprising of Justice Aniruddha Bose and Justice J.B. Pardiwala passed a Judgment dated 01-09-2022 in the matter of Life Insurance Corporation vs Sanjeev Builders Pvt Ltd and Another Civil Appeal No. 5909 of 2022 and reiterated the grounds for allowing amendment of pleadings including plaint and written statement under Order 6 Rule 17 of the Code of Civil Procedure 1908 (CPC).

In the present case, the Respondent-Builder, namely, Sanjeev Builders Pvt Ltd. had filed a Suit against the Appellant, Life Insurance Corporation (LIC) before Bombay High Court (Original Side), in Suit No. 894 of 1986, seeking Specific Performance of Agreement to Sell dated 08-06-1979 or in the alternative, allow relief of damages.

During the pendency of the Suit, the Respondent-Builder moved Chamber Summons No. 854 of 2017 before the Single Judge of Bombay High Court, seeking amendment of Plaint to enhance the amount towards the alternative claim for damages, as in the last 30 years there had been tremendous escalation of the value of Suit Property, which has an adverse effect on the quantum of compensation, etc. The Single Judge of Bombay High Court allowed the Chamber Summons No. 854 of 2017, vide Order dated 11-09-2018, thereby permitting amendment of Plaint under Order 6 Rule 17 of CPC and directions to the Appellant-LIC to file additional written statement. Order 6 Rule 17 of CPC (Amendment of pleadings) is reproduced below for quick reference:

The Court may at any stage of the proceedings allow either party to alter or amend his pleadings in such manner and on such terms as may be just, and all such amendments shall be made as may be necessary for the purpose of determining the real questions in controversy between the parties:

Provided that no application for amendment shall be allowed after the trial has commenced, unless the Court comes to the conclusion that in spite of due diligence, the party could not have raised the matter before the commencement of trial.

Aggrieved, the Appellant-LIC filed an Appeal before the Division Bench of the High Court in Appeal [L] No. 499 of 2018, which was dismissed vide Judgment dated 13.12.2018. The High Court thereby permitted the Respondent-Builder to amend the Plaint.

Aggrieved, the Appellant-LIC filed an Appeal before the Supreme Court. The Apex Court passed a Judgment dated 01-09-2022 and observed as follows:

1) That Courts may allow amendment of pleadings under Order 6 Rule 17 of CPC in the following circumstances:

i) If the Court is of the view that a party would otherwise suffer irreparable loss and injury or would sub-serve the cause of justice and help to avoid further litigation.

ii) If it is for determination of the real controversies in the suit.

iii) If such amendment amounts to only a different or an additional approach to the same facts or seeking of an alternative relief. Such an amendment would also be allowed after expiry of limitation period, in the interest of justice.

iv) But the proposed amendment (a) should not change / substitute a new cause of action different from the cause of action based on which the original litigation was initiated or defense was taken, (b) should not involve casual negation and allegations contradictory to the admitted facts, (c) should not cause such prejudice to the other side which cannot be compensated by costs and (d) should not amount to defeating a legal right accruing to the opposite party owing to delay in filing for amendment of pleadings.

2) That the Appellant has contended that the subsequent amendment should be barred under Order 2 Rule 2 of CPC (Suit to include the whole claim). The principle underlying the said provision is that if two suits are filed and the relief claimed therein are based on the same cause of action, then the subsequent suit would be barred under Order 2 Rule 2 of CPC. However, the principle laid down thereunder is applicable to subsequent suits and not subsequent amendment sought on the existing suit. Hence, the Appellant’s submission in that regard was dismissed.

4) Further, provision for amendment of plaint and award of compensation and / or specific performance may also fall under Section 21 of the Specific Relief Act 1963 (Power to award compensation in certain cases) as follows:

ii) In certain cases, if the Court feels that specific performance ought not to be granted, but the defendant has breached the contract, then compensation may be awarded to the plaintiff.

iii) Further, in case specific performance of contract has become impossible to be performed due to the fault of the plaintiff, then he/she is not entitled to the relief of compensation under Section 21, as such relief can be sought in addition to specific performance.

iv) But if the contract has become impossible to be performed without any fault of the plaintiff, then Section 21 enables award of compensation in lieu/ substitution of specific performance.

v) As per Section 21 (5) of the Specific Relief Act 1963, compensation cannot be awarded if the plaintiff has not made a claim thereof in his / her plaint. But as per the Proviso to the said Section 21 (5), the Courts have ample power to allow amendment of plaint at any stage of the case, for including a claim for such compensation.

vii) But the Supreme Court held that even otherwise, it is permissible in law for the Plaintiff to carry out an amendment in his pleading by introducing a relief for enhanced compensation under Order 6 Rule 17 of CPC.

Thus, based on the aforesaid facts and provisions of law, the Apex Court held that in the present case, as the Respondent-Builder has claimed for enhancement of compensation in addition to a decree for specific performance of the Agreement to Sell, the same has been allowed under Order 6 Rule 17 of CPC for determining the real question in controversy between the Parties. Thus, the Division Bench and Single Judge Bench Orders of the High Court have been upheld and the Appeal has been dismissed.

The CPC allows a litigant to alter, amend or add to his pleadings, if the litigant can show that the same is necessary for determining the real question of controversy between the parties. However, no application for amendment can be allowed if trial has commenced. This provision of the law while being a protective measure to a litigant who has not shown due diligence at the time of filing of the litigation, tends to unduly delay the matter by literally restarting the matter in a case where a plaint is sought to be amended. The said delay acts adversely against the defendant and prolongs the matter unnecessarily. Compensation by way costs awarded by Indian courts is so paltry that it cannot adequately compensate the defendant for the time and additional legal expenses he / she has to incur to meet the amended pleadings.