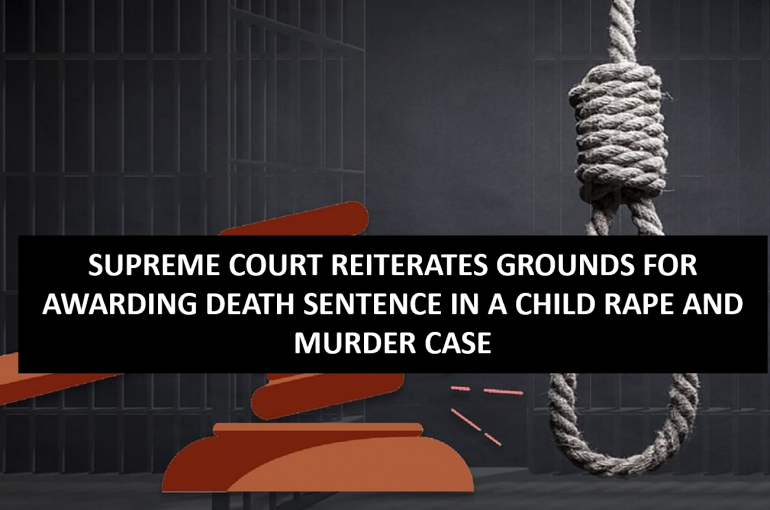 A three Judge Bench of the Supreme Court comprising of Justice A.M. Khanwilkar, Justice Dinesh Maheshwari, Justice C.T. Ravikumar has in a recent case of Manoj Pratap Singh vs The State of Rajasthan passed a Judgment dated 24-06-2022 and reiterated the grounds for upholding death sentence in a child sexual assault-rape-murder case.

In this case, one, Manoj Pratap Singh, the Appellant herein (Accused) has been accused of (a) kidnapping a differently abled seven-and-a-half-year-old girl in front of her parents (Deceased), (b) taking her to a secluded place, (c) having committed rape upon her, and (d) having killed her by causing injuries on her head.

The Prosecution has been able to establish that (i) the Deceased was lastly seen with the Appellant when he took her away, (ii) the dead body of the Deceased-Victim and other articles related with the crime were recovered at the instance of the Appellant, (iii) the medical and other scientific evidence was consistent with the Prosecution’s case and (iv) the Appellant has not been able to explain his whereabouts at the time of crime or adduce any other evidence in his defense.

Hence, the Court of Special Judge, Protection of Children from Sexual Offences Cases, Rajsamand (Trial Court) held that the Prosecution was able to establish the charges against him beyond any reasonable doubt. Thus, the Trial Court, vide Judgment of Conviction dated 28.09.2013 and Order of Sentencing dated 01.10.2013 in Sessions Case No. 12 of 2013, convicted the Accused for offences punishable under the following provisions of the Indian Penal Code, 1860 (IPC) and the Protection of Children from Sexual Offences Act, 2012 (POCSO Act) and awarded punishments for the respective offences as listed below:

The Trial Court submitted for confirmation of death sentence before the High Court of Judicature for Rajasthan in D.B. Criminal Murder Reference No. 3 of 2013 and on the other hand, the Appellant filed an Appeal against the Trial Court Judgment of Conviction dated 28.09.2013 and Order of Sentencing dated 01.10.2013 in Sessions Case No. 12 of 2013 before the High Court in D.B. Criminal Jail Appeal No. 854 of 2013.

The High Court, considering the brutal rape and murder of a minor girl, upheld the Trial Court’s Conviction Judgment dated 28.09.2013 and Order of Sentencing dated 01.10.2013 and thereby, confirmed the Death Sentence and other punishments awarded by the Trial Court, vide Common Judgment and Order dated 29.05.2015 (Impugned Judgment).

Aggrieved, the Accused filed an Appeal before the Supreme Court. The Apex Court passed a Judgment dated 24-06-2022 and made the following observations:

2) That the aforesaid facts and circumstances worsen the criminality of conduct that has been proved beyond any reasonable doubt against the Appellant.

3) That the important grounds for awarding death sentence are as follows:

i) if the offence is of an exceptionally depraved and heinous character and constitutes, on account of its design and the manner of its execution, a source of grave danger to the society at large

4) That in this case, the Appellant was 28 years old and had a family including parents, wife and minor daughter. But he had a history of criminal cases filed against him in Uttar Pradesh out of which involved murder of a jail inmate while he was in jail. Hence, there are no chances of reformation and rehabilitation of the Accused.

Based on the aforesaid observations, the Supreme Court held that this is a case of extreme depravity that shocks the conscience, particularly, the gruesome nature of action and crime committed by the Accused on a differently abled seven-and-a-half-year-old minor girl. Hence, the Apex Court dismissed the Appeals and upheld the conviction of the Appellant and the death sentence and other punishments awarded by the Trial Court and confirmed by the High Court in this case.