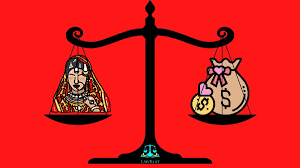 The Informant rushed to the Deceased’s Matrimonial Home on receiving the information that she has been missing for some days. After such information, the Informant filed a Complaint with the local Police. The local Police filed Case No. 71/1997 under Sections 304B (Dowry death) of the Indian Penal Code 1860 (IPC), 201 IPC (Causing disappearance of evidence of offence, or giving false information to screen offender), 34 IPC (Acts done by several persons in furtherance of common intention) after receiving the Compliant. Later on, a Charge-sheet was filed by local Police for the above-mentioned offences and also under Section 3 (Penalty for giving or taking dowry) and 4(Penalty for demanding dowry) of the Dowry Prohibition Act, 1961 (Act).

After 5 days of FIR being lodged, a dead body was discovered near bank of River Barakar which was presumed to be of the Deceased. The Informant, after looking at the partially decomposed face and clothes of the Deceased, confirmed her identity – as his Daughter and wife of Ram Sahay Mahto.

“(i) The deceased Fulwa Devi was married with Ram Sahay Mahto S/o. Nema Mahto and Parvati Devi within seven years of her death;

(ii) The dead body of the deceased was found in river Barakar on 13.8.97 and there are consistent evidence that the deceased died otherwise than under normal circumstances;

(iii) The deceased was at her Sasural prior to her death;

(iv) The deceased was traceless but neither information was given to her parents nor was information given to the Police;

(v) The deceased was subjected to assault and harassment by the accused persons who are husband and his other relatives;

(vi) Such cruelty and harassment was in connection with demand of dowry;

(vii) Such cruelty and harassment was made soon before her death.”

The Hon’ble Apex Court passed a Judgment dated 17.12.2021 and observed as follows:

Therefore, based on the aforesaid grounds, the Supreme Court dismissed the Appeal of the Husband and upheld the Trial Court’s punishment thereof. The Hon’ble Apex Court further allowed the Appeal filed by the Mother in Law – Parvati Mahto and acquitted her.