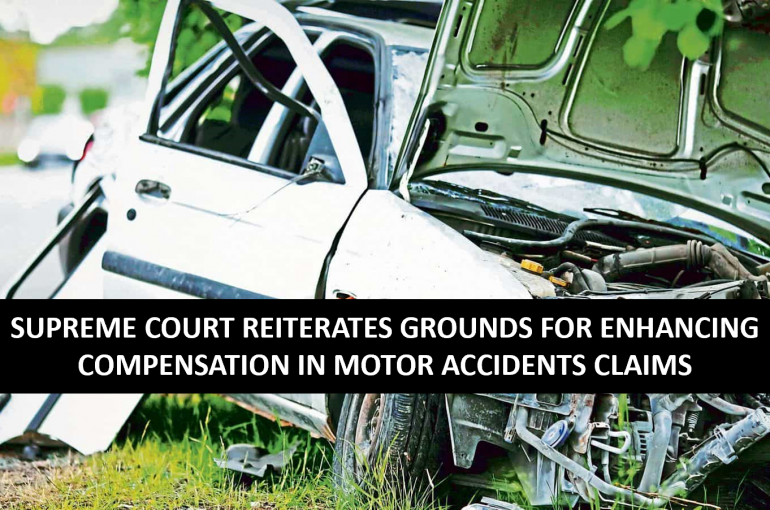 A Two Judge Bench of the Supreme Court has in a matter of Abhimanyu Pratap Singh Vs Namita Sekhon and Another passed a Judgment dated 06-07-2022 and reiterated grounds for enhancing compensation in motor accidents cases under various pecuniary and non-pecuniary heads.

In this case, the Claimant, Abhimanyu Pratap Singh, was travelling to Chandigarh with his mother on 10-11-1996 in a Maruti Car, which was insured with United India Insurance Company Limited. The Car was being driven by a driver named Sampat Singh in a rash and negligent manner, as a result of which they met with an accident. The driver died on the spot and the Claimant sustained severe injuries. At the time of the accident, the Claimant was a five-year-old minor studying in UKG in Chandigarh. An FIR was lodged on 11-11-1996 and a Claim Petition was filed before the Motor Accidents Claims Tribunal (Tribunal) under Section 166 of the Motor Vehicles Act, 1988 (Application for compensation) seeking compensation of Rs. 2 Crores on account of permanent disability caused to the Claimant due to the accident. The Claimant suffered (a) fracture in temporal bone and head injury, as a result of which the development of his brain was not comparable to a common man, (c) injury in his lower limbs, as a result of which, he cannot move without a wheel chair and needs all time attendants for his daily routine work. Further, his future and his dreams of becoming an Executive/IAS Officer like his parents, were in complete jeopardy.

Based on the aforesaid reasons, the Tribunal passed an Award dated 03-06-2002 in MACT Case No. 29 of 1997 and held that as the Claimant has suffered 100% disability, the Tribunal awarded compensation of Rs. 1,92,000/- with interest at 9% p.a. from date of filing Claim Petition till date of payment, under various heads including (i) attendant charges, (ii) physiotherapy, (iii) transportation charges, (iv) use of diapers in future, (v) loss of expectations of life, (vi) loss of marital bliss, (vii) loss of enjoyment and amenities of life, (viii) permanent disability, pain and sufferings, etc.

High Court of Punjab and Haryana at Chandigarh

Aggrieved, the Claimant filed an Appeal before the High Court of Punjab and Haryana at Chandigarh and the said Appeal was partly allowed vide Judgment dated 21-05-2019 in FAO No. 4829 of 2002. The High Court enhanced the compensation from Rs. 1,92,000/- to Rs. 23,20,000/- and interest at 7.25% p.a. on the enhanced amount from date of filing Claim Petition till date of payment, under various heads of (i) motorized wheel chair, (ii) future loss of earnings, (iii) attendant charges, (iv) medicines, physiotherapy and diapers, (v) special diet, (vi) loss of amenities of life and marital bliss.

Aggrieved by the inadequate compensation awarded by the Tribunal and the High Court, the Claimant filed an Appeal before the Supreme Court and sought for enhancement of compensation on both pecuniary and non-pecuniary heads. The Apex Court passed a Judgment dated 06-07-2022 and made the following observations:

1) That the High Court while awarding compensation for loss of future earnings, calculated the same for 10 years period, as he had already started the advocate profession. But the High Court overlooked the fact that on account of the Claimant’s permanent disability, the earnings shall affect him for his whole life and the capacity of the Claimant being an advocate cannot be equated with other practicing advocates, as he would have to make extraordinary efforts to attend court hearings and satisfy the Client’s expectations.

2) That the High Court while awarding compensation for attendant charges, calculated the same for only 20 years period, but the High Court failed to appreciate the fact that the Claimant would be requiring an attendant all the time, during his lifetime.

4) Further, in respect of the heads of pain and sufferings, loss of marital bliss and loss of amenities of life, he would have to face the society for his entire life and as such the compensation awarded was inadequate.

5) That on account of his permanent disability, he would be required to get regular health check-ups, prolonged hospitalisation and also continuous medical attention owing to paralysis of his lower limbs, etc.

6) That while computing amount of compensation, both pecuniary and non-pecuniary heads have to be taken into consideration:

i) Pecuniary damages include the following charges:

Expenses for mental and physical shock, pain and suffering that a claimant has already suffered or is likely to suffer in the future, loss of amenities of life, loss of expectation of life, inconvenience, hardship, discomfort, frustration, mental stress in life, etc

Based on the aforesaid grounds, the Supreme Court partly allowed the Appeal and enhanced the compensation to Rs. 46,62,000/­under various pecuniary heads and Rs. 5,00,000/- under various non-pecuniary heads, which totals to Rs. 51,62,000/­- and that the enhanced amount would carry an interest at 6.5% p.a from date of filing Claim Petition till date of realisation.