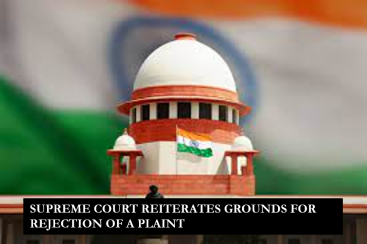 SUPREME COURT REITERATES GROUNDS FOR REJECTION OF A PLAINT

Recently, the Bench of Hon’ble #SupremeCourt of India in the case of Srihari Hanumandas Total vs Hemant Vithal Kamat & Ors [Civil Appeal No 4665/2021] vide its #Judgment dated 09-08-2021 held that a plaint is not liable to be rejected under Order 7 Rule 11 (#Rejection of #Plaint) of the Civil Procedure Code, 1908 (“#CPC”) on the ground of #ResJudicata, i.e. a matter that has been adjudicated by a competent #court, may not be pursued further by the same parties.

The facts of the present case relates to the Plaintiff, Hemant Vithal Kamat, who had filed a suit for possession of a property in 2007. The subject matter of the suit was a mortgaged property which originally belonged to the Respondent and his brother. Thereafter, the Respondents mortgaged the suit property to the Karnataka State Finance Corporation (“KSFC”) as a security against a loan.

However, when the Respondents defaulted in payment of the loan, KSFC auctioned the mortgaged property and the same was then purchased by one Srihari Hanumandas (the “Appellant”) vide Sale Deed dated 08.08.2006. But the Respondents-Original Owner failed to deliver the vacant possession of the said property to the Appellant-Buyer. Consequently, the Appellant-Buyer filed suit for possession of the said property (“2007 Suit”).

Thereafter, the Respondents-Original Owner also instituted a suit challenging the Sale Deed executed by KSFC in favour of the Appellant-Buyer primarily on the ground that KSFC had no authority to put the suit property for sale (“2008 Suit”).

The Trial Court in the 2007 Suit passed a Judgment dated 26.02.2009 in favour of the Appellant-Buyer and directed the Respondents-Original Owner to hand over the possession of the property to the Appellant.

Aggrieved by the Trial Court’s Judgment dated 26.02.2009, one of the Respondents-Original Owner filed an Appeal before the High Court of Karnataka. Meanwhile, the Respondents-Original Owner filed another Application under Section 10 of the CPC in 2008 Suit for staying the suit proceedings till the disposal of the Appeal filed in the 2007 Suit on the ground that the issues involved in the 2008 Suit were directly and substantially the same as the issues in the 2007 Suit. The Trial Judge vide its Order dated 03.11.2012 stayed the 2008 Suit proceedings.

Thereafter, in the aforesaid Appeal in the 2007 Suit, the High Court upheld the Trial Court Judgment dated 26.02.2009 and dismissed the Appeal.

Further, the Appellant-Buyer filed an Application under Order 7 Rule 11 of CPC before the Trial Court for rejection of the plaint filed in 2008 Suit, on the ground that as per the principles of Res Judicata after the Trial Court’s Judgment dated 26.02.2009 in 2007 Suit, which has been upheld by the High Court, the rights of the Parties cannot be further adjudicated and re-litigated upon in the 2008 Suit.

The Appellant before the Trial Court contended that the subject matter of 2008 Suit which is relating to the validity of the sale deed and the issue of title were already raised in the previous 2007 Suit. The Appellant further contended that once the Judgment in the 2007 Suit settled the issues in favour of the Appellant, the rights of the Parties cannot be further adjudicated in any other suit.

However, the Application filed by the Appellant for rejection of the 2008 Suit was rejected by the Trial Court, vide its Order dated 01.07.2019 and the revision petition filed before the High Court was also dismissed vide Judgment dated 18.01.2021. Aggrieved, the Appellant approached the Supreme Court.

The Supreme Court held and observed in the following manner:

2) To decide whether Res Judicata can be the basis or ground for rejection of the plaint, the Apex Court referred to the case of Kamala & others v. KT Eshwara Sa [(2008) 12 SCC 661], wherein this Court held that the principles of Res Judicata, when attracted, would bar another suit in view of Section 12 of the CPC, which provides that where a plaintiff is barred from instituting a further suit in respect of a particular cause of action, then he shall not be entitled to institute a suit in respect of that cause of action in any court to which the CPC applies. The question involving a mixed question of law and fact which may require not only examination of the plaint but also other evidence and the order passed in the earlier suit may be taken up either as a preliminary issue or at the final hearing, but, the said question cannot be determined at that stage. This Court also relied upon its similar decisions in Church of Christ Charitable Trust & Educational Charitable Society v. Ponniamman Educational Trust [(2012) 8 SCC 706] and Soumitra Kumar Sen v. Shyamal Kumar Sen [(2018) 5 SCC 644].

3) That the guiding principles for deciding an application under Order 7 Rule 11(d) can be summarized as follows:

i) In order to reject a plaint on the ground that the suit is barred by any law, only the averments in the plaint will have to be referred to;

ii) The defense made by the defendant in the suit must not be considered while deciding the merits of the application;

iii) To determine whether a suit is barred by Res Judicata, it is necessary that (i) the ‘previous suit’ is decided, (ii) the issues in the subsequent suit were directly and substantially in issue in the former suit; (iii) the former suit was between the same parties or parties through whom they claim, litigating under the same title; and (iv) that these issues were adjudicated and finally decided by a court competent to try the subsequent suit; and

iv) Since an adjudication of the plea of Res Judicata requires consideration of the pleadings, issues and decision in the ‘previous suit’, such a plea will be beyond the scope of Order 7 Rule 11 (d), where only the statements in the plaint will have to be perused.

In view of the aforesaid observations, the Supreme Court held that the plaint in the 2008 Suit is not liable to be rejected under Order 7 Rule 11 of the CPC. It was however clarified that the Court expressed no opinion on whether the subsequent suit i.e., 2008 Suit was barred by the principles of Res Judicata. The Apex Court granted liberty to the Appellant to raise such issue before the Trial Court.