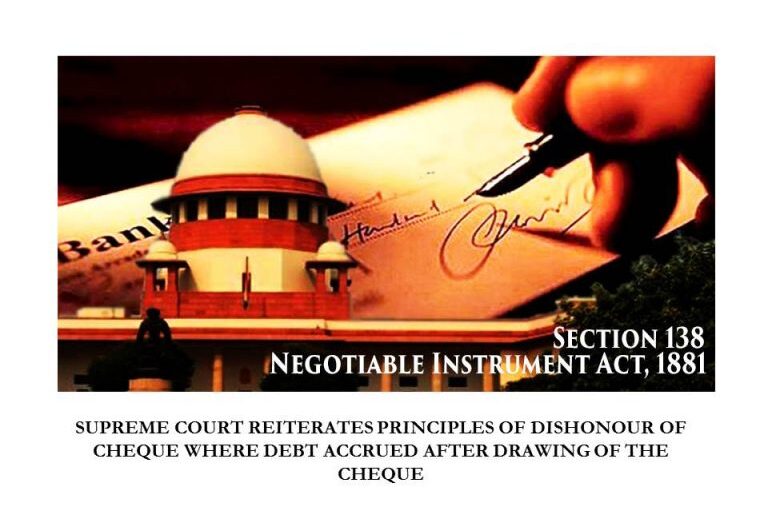 A Two Judge Bench of the Hon’ble #SupremeCourt of India comprising of Justices Dr Dhananjaya Y Chandrachud and A S Bopanna passed a Judgment dated 03-12-2021 in the case of Sunil Todi & Ors. vs State of Gujarat & Anr. {Criminal Appeal No.1446 of 2021} and held that Section 138 of the #NegotiableInstruments Act, 1881 (Act) (Dishonour of #cheque for insufficiency, etc., of funds in the account) is attracted in cases where debt is incurred after the drawing of the cheque but before its encashment.

In the present case, a Letter of Intent was issued on 19-12-2015 by R.L. Steels & Energy Limited (the Company) to the second Respondent seeking uninterrupted power supply at the Company’s Plant situated at Aurangabad, Maharashtra. Clause (k) of the said Letter of Intent stipulated that all payments would be made within sixty days through a Letter of Credit (LC) to be opened by the Company. The Company addressed an Email dated 24-04-2016 stating that payment security would be given by cheque for an amount equivalent to the quantum of energy to be scheduled for forty-five days. It was agreed by the second Respondent, vide Communication dated 30-04-2016, that the payments for monthly billing were to be made by LC within seven days of the receipt of bills. The Company informed the second Respondent, vide Communication dated 30-06-2016, that it was issuing two cheques “only for security deposit” and that the cheques were to be deposited “after getting confirmation only”.

Subsequently, a post-dated Cheque of 28-08-2017 for an amount of Rs.2,67,84,000/- was issued with the following endorsement on its reverse: “to be deposited after confirmation only for security purpose”. The power supply commenced from 01-07-2016. The Company requested its banker, Karur Vysya Bank, vide Communication dated 04-07-2016, to stop the payment of the above two cheques. Thereafter, on 24-07-2016, the second Respondent and the Company entered into a Power Supply Agreement (Agreement) wherein it was stated that the Company would make payment to the second Respondent on the 10th day of every calendar month via LC.

On 20-10-2016, the Agreement was terminated by the Company. The Cheque issued by the Company was deposited on 28-08-2017. On 18-09-2017, a Legal Notice was issued by the second Respondent to the Company’s Managing Director and Directors (Appellants) for the offence of dishonour of cheque under Section 138 of the Act. The second Respondent alleged that a total sum of Rs.6,02,91,089/- was payable by the Company. It was further alleged that the Cheque dated 28-08-2017, issued by the Appellants and drawn on Karur Vysya Bank, Aurangabad had been dishonoured for the reason of ‘payment stopped by drawer’. In response to this, the Appellants contended that the Cheque was issued only for the purpose of Security and not for encashment.

Subsequently, on 02-11-2017, the second Respondent filed a Criminal Complaint against the Appellants in the Court of the Additional Chief Judicial Magistrate, Mundra for dishonour of Cheque in the amount of Rs.2,67,84,000/- and sought issuance of summons and levy of fine of Rs. 5,35,68,000. On 06-11-2017, the Magistrate issued summons to the Appellants. Thereafter, the Appellants filed Petitions under Section 482 of the Code of Criminal Procedure, 1973 (CrPC) before the High Court of Gujarat (High Court) for quashing of the Criminal Complaint. Simultaneously, the Complainant filed a Regular Civil Suit for recovery of dues.

By the Impugned Judgment and Order dated 24-06-2019, a Single Judge of the High Court dismissed the Petitions for quashing the Complaint.

Aggrieved by the Impugned Judgment and Order dated 24-06-2019, the Appellants approached the Hon’ble Supreme Court of India. After taking into consideration, the facts of the case and the arguments advanced by the Parties to the dispute, the Apex Court observed that Section 138 of the Act applies in case of a debt that exists on the date of drawing the cheque and also in cases of debt that exists after drawing of cheque till its presentation. “The true purpose of Section 138 would not be fulfilled, if ‘debt or other liability’ is interpreted to include only a debt that exists as on the date of drawing of the cheque.” While referring to the meaning of ‘Debt’ the Bench observed that a post-dated cheque issued after the debt has been incurred would be covered by the definition of ‘debt’.

In this regard, the Supreme Court made the following observations:

“26. The object of the NI Act is to enhance the acceptability of cheques and inculcate faith in the efficiency of negotiable instruments for transaction of business. The purpose of the provision would become otiose if the provision is interpreted to exclude cases where debt is incurred after the drawing of the cheque but before its encashment. In the present case, the cheque was issued in close proximity with the commencement of power supply. The issuance of the cheque in the context of a commercial transaction must be understood in the context of the business dealings. The issuance of the cheque was followed close on its heels by the supply of power. To hold that the cheque was not issued in the context of a liability which was being assumed by the company to pay for the dues towards power supplied would be to produce an outcome at odds with the business dealings. If the company were to fail to provide a satisfactory LC and yet consume power, the cheques were capable of being presented for the purpose of meeting the outstanding dues.”

The Apex Court noted that in the instant matter, Debt had incurred after the second Respondent began supply of power and payment was not made thereof because of non-acceptance of the LCs. Thus, the Hon’ble Supreme Court upheld the Judgment passed by the High Court dated 24-06-2019 and dismissed the Appeals.