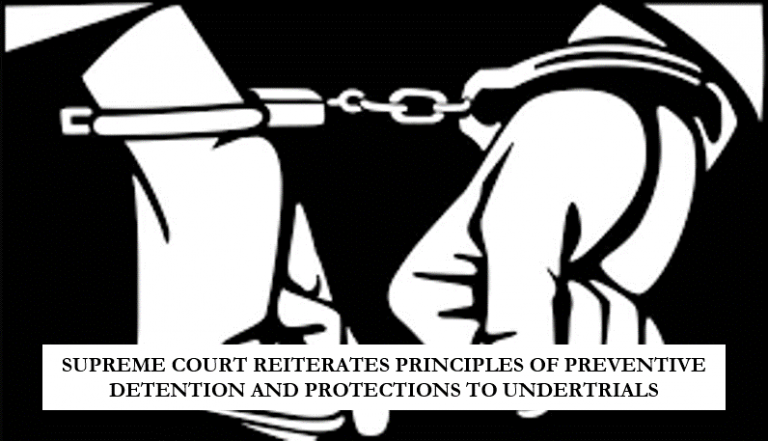 A three Judge Bench of the Supreme Court comprising of Justices, Dr Dhananjaya Y Chandrachud, Vikram Nath and B V Nagarathna passed a Judgment dated 29-10-2021 in Sarabjeet Singh Mokha vs The District Magistrate, Jabalpur & Ors., wherein the Apex Court discussed the provisions of preventive detention and protections to undertrials and detainees in India.

In this case, an FIR bearing No. 252/2021 was registered at Omti Police Station, Jabalpur on 10-05-2021 against Dr. Sarabjeet Singh Mokha, Director of City Hospital, Jabalpur (Appellant herein) for conniving with others in procuring 500 fake Remdesivir injections from Indore worth Rs. 15 Lakhs and administering the same to 50 patients at the City Hospital on 30-04-2021, in order to make illegal profits, thereby endangering the lives of the patients.

The FIR was registered under the following provisions of law:

On 11-05-2021, the Superintendent of Police made a request to the District Magistrate seeking permission to take action against the Appellant under the National Security Act 1980 (NSA). The District Magistrate passed an Order dated 11-05-2021 under Section 3 (2) of NSA, thereby detaining the Appellant for a period of three months (Detention Order) on various grounds including (i) administering spurious Remdesivir injections to patients which resulted in their untimely deaths, (ii) use of fake bills to procure spurious Remdesivir injections, (iii) cheating patients for administering fake essential drugs, etc.

The relevant provisions of NSA applicable in this case are reproduced below:

(4) When any order is made under this section by an officer mentioned in sub-section (3), he shall forthwith report the fact to the State Government to which he is subordinate together with the grounds on which the order has been made and such other particulars as, in his opinion, have a bearing on the matter, and no such order shall remain in force for more than twelve days after the making thereof unless, in the meantime, it has been approved by the State Government:

Provided that where under section 8 the grounds of detention are communicated by the officer making the order after five days but not later than fifteen days from the date of detention, this sub-section shall apply subject to the modification that, for the words “twelve days”, the words “twenty days” shall be substituted.

Meanwhile, the Appellant filed a Writ Petition under Article 226 of the Constitution of India to challenge both the Detention Order and the Extension Order, before the High Court of Madhya Pradesh on 03-07-2021. The High Court passed a Judgment dated 24-08-2021 and thereby, rejected the said Writ Petition on various grounds inter alia (a) that the act of administering fake Remdesivir injections is sufficient to attract Section 3 of NSA; (b) that the District Magistrate had given detailed reasons while passing the Detention Order; (c) that the District Magistrate’s Order dated 11-05-2021 was communicated to the State Government on 13-05-2021 to seek its approval, hence, there was no undue delay in communication.

Aggrieved by the High Court’s Judgment dated 24-08-2021, the Appellant filed a Criminal Appeal before the Supreme Court. During the pendency of the proceedings before the Apex Court, the Detention Order was further extended for a period of three months, i.e. till 12-02-2022.

1) That Article 22 of the Constitution of India 1950 (Protection against arrest and detention in certain cases) provides specific protections to undertrials and detainees in India. Article 22 provides for preventive detention, where a person is detained without trial and hence, the said provision incorporates procedural safeguards which mandate an immediacy in terms of time.

2) That broadly, Article 22 gives a right to the detenu to submit a representation against an order of detention and provides as follows:

a) A person cannot be detained for a period longer than three months unless an Advisory Board has reported that in its opinion there is sufficient cause for such detention.

b) The detained person shall be informed about the grounds of detention order as soon as possible by the concerned Authority, so that the detenu may get an opportunity to make a representation against such order at the earliest.

3) That the provisions of NSA also follow the mandate of Article 22:

i) Section 3 (4) provides that an order of detention shall not remain in force for more than twelve days after the making thereof unless, in the meantime, it has been approved by the State Government.

ii) Section 3 (5) further provides that the State Government shall, within 7 days, report the fact of approval of detention order along with reasons thereof, to the Central Government.

iv) That as per Section 10 of NSA, the appropriate Government shall, within 3 weeks from the date of detention, submit the grounds of detention order and representation made by the detained person, to an Advisory Board constituted under Section 9 of NSA.

v) Thereafter, the Advisory Board has to submit its report to the appropriate Government within 7 weeks from the date of detention order after considering the relevant materials. Based on its report, either the detention order is allowed or rejected / revoked by the Government.

vi) That in this case, the following events indicate that there was undue delay in considering the Appellant’s Representations by the Central and State Government:

5) Further there was no proof available that the Appellant was informed about the Central Government’s rejection of his Representation.

Thus, the Apex Court held that (a) as the State Government caused unexplained delay in considering the Representation of the Appellant and (b) the Central and the State Government failed to communicate the rejection of the Appellant’s Representation in a time-bound manner, hence, the Detention Order has been invalidated and accordingly, all further extensions of detention period also stand invalidated. As a result, the High Court Judgment dated 24-08-2021 has been set aside.