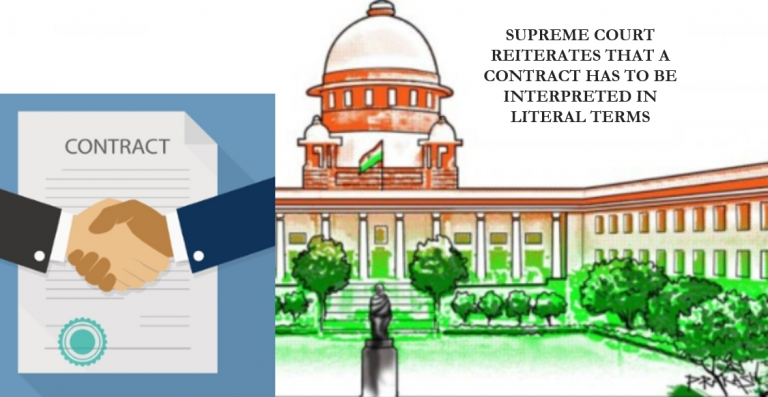 The Hon’ble Bench of the #SupremeCourt on India in the case of <strong><em>Bangalore Electricity Supply Company Limited (BESCOM) versus E.S. Solar Power Pvt. Ltd. &amp; Ors. [CA No. 9273/2019]</em></strong>, vide its Judgment dated 03.05.2021 reiterated that a liberal or a narrow approach cannot be adopted to construe a #contractual clause in an #agreement. A contract has to be read literally and the #court cannot interpret the contract.

In this case, the Karnataka Renewable Energy Development Limited (<strong>KREDL</strong>) issued a Request for Proposal on 20.11.2015 to bidders for undertaking development of Solar PV ground mount Power Plants through Private Sector participation. In this regard, the Power Purchase Agreements (<strong>PPAs</strong>) were entered into between the Bangalore Electricity Supply Company Limited (the “<strong>Appellants</strong>”) and E.S. Solar Power Pvt. Ltd. and other parties (the “<strong>Respondents</strong>”) on 23.05.2016. The Projects for development of Solar PV Ground Mount Power Plants of 1200 MWA of Solar power were awarded to the Respondents. The said PPAs were approved by the Karnataka Electricity Regulatory Commission (the “<strong>Commission</strong>”) on 17.10.2016. As per the PPAs, the Scheduled Commissioning Date for the Solar Projects was to mean 12 months from the effective date.

The Appellants have filed two separate Appeals before the Supreme Court of India against the Order of the Appellate Tribunal for Electricity. The Supreme Court while considering the dispute related to the computation of the date observed that the literal interpretation of the agreement is necessary to decide the conflict between the Parties.

<strong>1)</strong> To construe a clause in a Contract, there is no scope for adopting either a liberal or a narrow approach. The exercise which has to be undertaken is to determine what the words used mean.

<strong>3)</strong> The Court referred to the broad principles of interpretation of contract in the case of <strong><em>Investors Compensation Scheme Limited vs. West Bromwich Building Society</em></strong> [1998 (1) AIR 98] and pointed out the following principles:

<em><strong>i)</strong> Interpretation is the ascertainment of the meaning which the document would convey to a reasonable person having all the background knowledge which would reasonably have been available to the parties in the situation in which they were at the time of the contract.</em>

<em><strong>ii)</strong> The law excludes from the admissible background the previous negotiations of the parties and their declarations of subjective intent. They are admissible only in an action for rectification. The law makes this distinction for reasons of practical policy and, in this respect only, legal interpretation differs from the way we would interpret utterances in ordinary life. The boundaries of this exception are in some respects unclear. But this is not the occasion on which to explore them.</em>

<em><strong>iii)</strong> The “rule” that words should be given their “natural and ordinary meaning” reflects the common sense proposition that we do not easily accept that people have made linguistic mistakes, particularly in formal documents.</em>

<strong>4)</strong> As per the clauses of the PPAs dated 23.05.2016 liquidated damages could be imposed on the Developer if he is unable to commence supply of power to the Appellants by the Scheduled Commissioning Date. The Commission approved the PPAs on 17.10.2016. According to the Agreements, the Scheduled Commissioning Date should be 12 months from the effective date i.e. 17.10.2016.

<strong>5)</strong> The Court interpreted the meaning of the term ‘Month’ under the Agreements as an essential part and it observed that the crucial expression in the definition of ‘Month’ is “excluding the date of the event”. If the date of the event i.e. 17.10.2016 is excluded, the Scheduled Commissioning Date would be 17.10.2017.

In view of the above, the Supreme Court upheld the decision of the Appellate Tribunal and held that the Court is not to delve deep into the details of human mind to explore the undisclosed intentions, but only to take the meaning of words used in the contract i.e. to say expressed intentions.